The Coolest Warbots, Drones, and Unmanned Tech at the Robotic Systems Show

Here in Vegas, at North America's biggest unmanned systems show, warbots abound even as the defense industry explores its civilian side 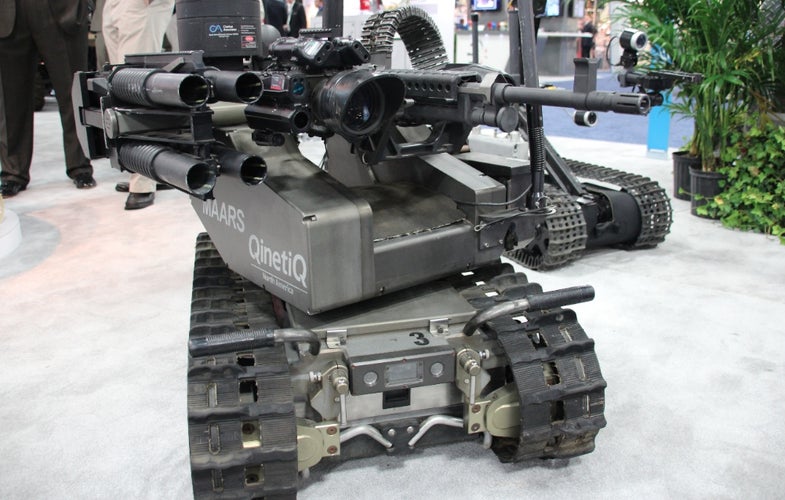 LAS VEGAS–The exhibition floor at the Association for Unmanned Vehicle Systems International’s annual North American show–the largest expo for both civilian and military unmanned robotic hardware in the country–opened yesterday, and for the rest of the week the robots are taking over, at least at the Mandalay Bay Convention Center in sunny Las Vegas. Naturally, PopSci just couldn’t stay away.

This year’s show is cast against a backdrop that is somewhat austere for the many, many robotics systems makers who exhibit here. Most of them do the majority of their businesses with governments around the world, many of which–like the United States–are facing huge cuts in military spending and a slowdown in the acquisition of new technologies. But when the age of austerity closes a door, Congress every so often opens a window. The mandated integration of unmanned systems into the U.S. national airspace by 2015 has many makers of unmanned aerial systems looking to apply their technology to civilian skies, while unmanned ground vehicle makers are making inroads into spaces like telepresence, site security, ground-based infrastructure inspection, and cargo logistics.

It’s a brave new robotic world here at AUVSI. Here’s a quick roundup of some of the coolest things we’ve come across so far, and check back throughout the week–we’ll be updating this list and posting additional coverage as the week unfolds. 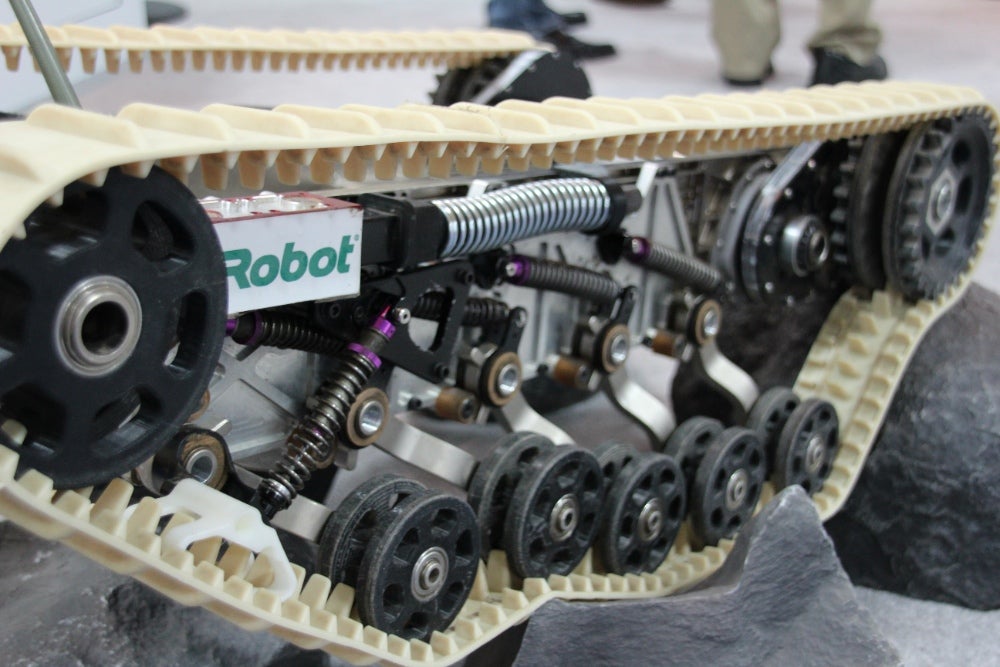 A New Tread for Bomb-Defusing ‘Bots

The engineers at iRobot couldn’t tell us much about this–it’s a project in development with DARPA. But you can see all you need to know. This new chassis and suspension for robotic platforms like iRobot’s Packbots and SUGVs (small unmanned ground vehicles) has multiple independently-suspended rollers underpinning its tank-like treads, allowing it to better traverse uneven terrain without risk of rolling over. Expect to see something like this on future iterations of remotely operated war-fighting robots in the future. 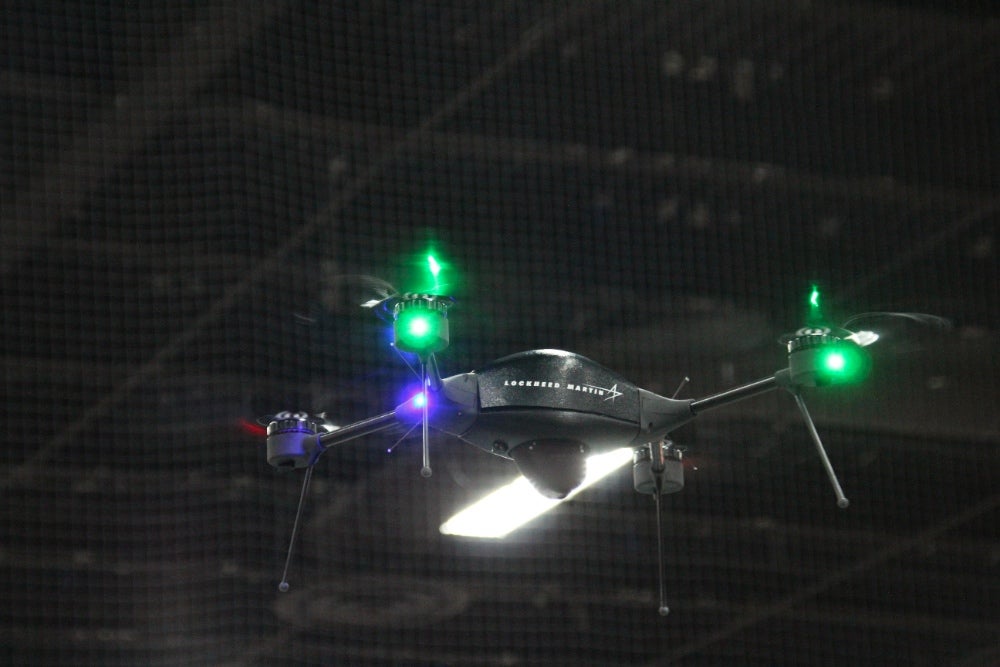 Lockheed Martin recently acquired eight-year-old sensor payload company Procerus, and it’s no wonder. Its namesake remotely-piloted platform looks like your average quadrotor–similar to the Parrot AR drones you can pick up for your kids at Brookstone. But where other quadrotors fall short–battery life, range, practical applications–Procerus is the real deal. It can run for 43 minutes on a full battery (that’s actually a really long time relative to other similar platforms), can autonomously fly a preprogrammed route, and carrying its most sophisticated available payload can capture 10 megapixel images and video (and pan/tilt/zoom to do so), can track targets on the ground, and can even see at night (via an optional dual sensor package that includes both infrared and daytime cameras). It’s radio link reaches out far beyond the actual battery range, meaning an operator–a first responder looking for survivors after a natural disaster, for instance–can fly Procerus for miles before having to turn around (top speed is in the 25-30 mile per hour range, depending on conditions). Even better, the whole thing folds into a small package about the size of a regulation football and stores in a small hard case, perfect for keeping in the trunk of a first responder vehicle. From cracking the case open to putting eyes up in the sky, you’re looking at maybe two minutes. That’s rapid deployment. 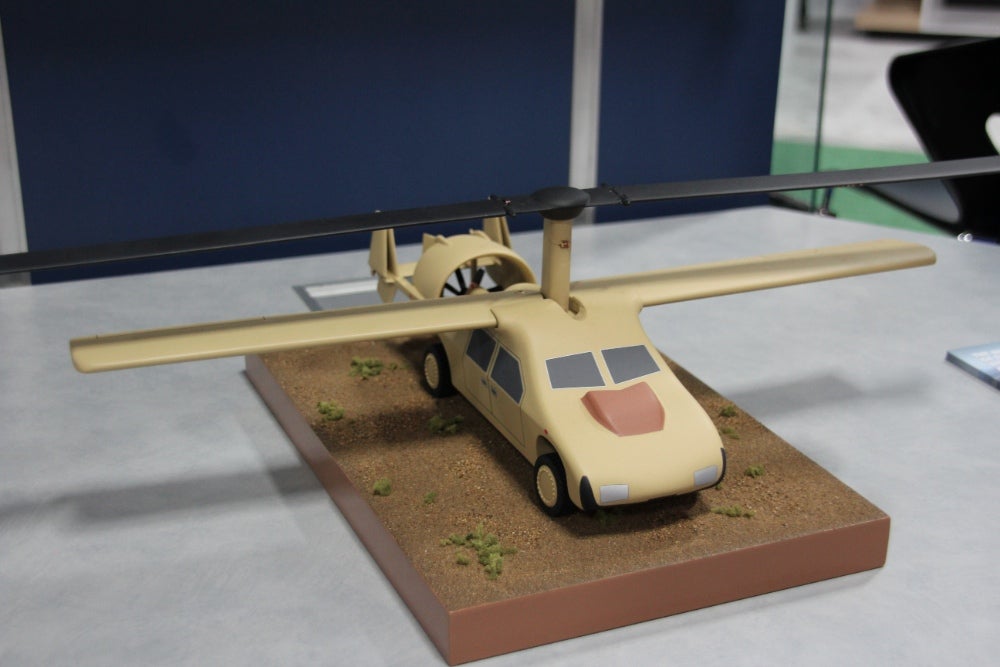 We never get to hear very much about early-stage DARPA development programs. But here at AUVSI, program managers were on hand from both Lockheed Martin and AAI, the two contenders for DARPA’s Transformer (TX) development program to build what is essentially a vertical takeoff/vertical landing flying humvee for the U.S. military. Those program managers weren’t saying too terribly much at this point either, but they did bring along some scale models and were willing to grant us a couple of brief–if mostly vague–comments about the status of their flying car designs. More on this later. 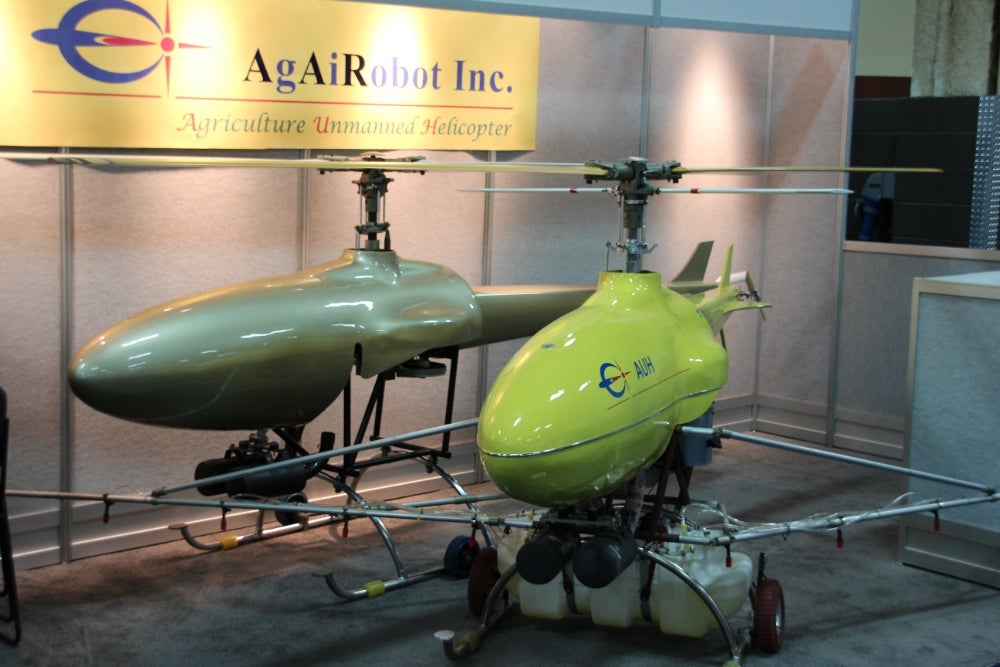 Unfortunately there was no one around the booth when we stopped by to see AgAiRobot Inc.’s Ag-210 on display at AUVSI. But we like the California-based company’s style. In a room full of defense-oriented unmanned systems and stealthy spy drones, its practicality is refreshing. Its 50 horsepower engine can haul a 15-gallon tank of pesticide, fertilizer, or other agricultural chemical to an optimum spraying height above plants (2-8 feet, depending on the chemical), and the company claims the downwash from the rotor helps evenly spread the spray across the crops below. Ag-210 is remotely piloted, but with so much autonomous capability on display across the floor here, it’s easy to see how something like this could quickly tap GPS and become an autonomous airborne agribot. 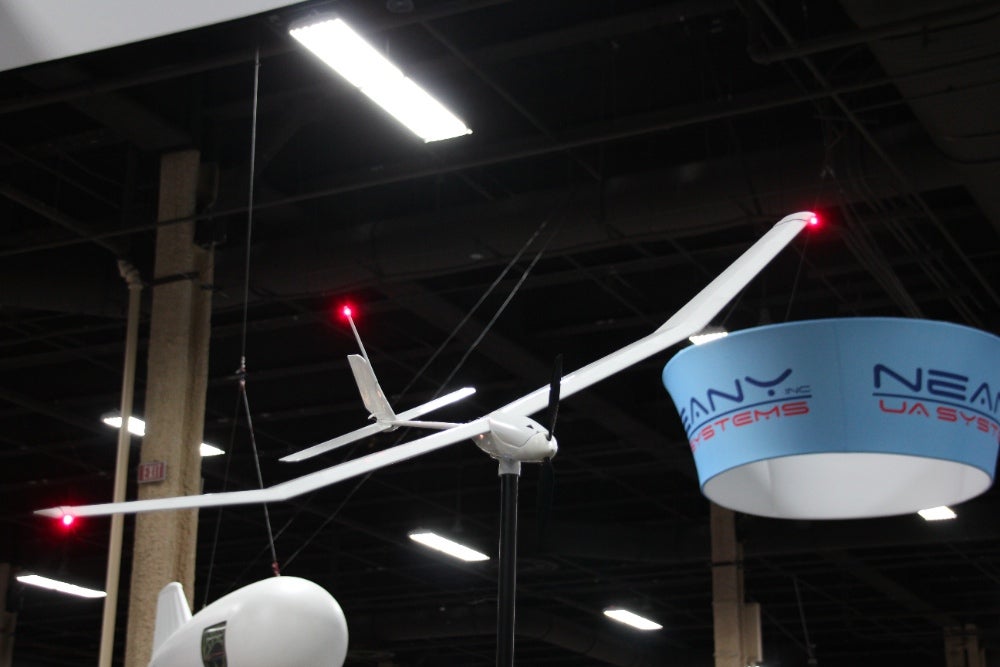 This might seem a bit wonky, but stay with me. Recon Robotics (maker of the Throwbot) has teamed up with Canadian autopilot experts MicroPilot to create an optical system that guides small unmanned aerial systems in for precision landings, solving a problem that you may not realize unmanned systems operators regularly have. Specifically, those operators are military. More and more, troops on the ground are gaining access to small unmanned aircraft that can be launched at the platoon level and perform area surveillance (or even deliver a deadly payload). But these aircraft are too light to weigh down with larger, more sophisticated flight control systems, and operators often have trouble landing them within a small target area. So when soldiers launch a drone from, say, the interior of their small, walled forward operating bases, they can’t always land it back inside the walls. That means someone has to go outside the wire and get it. Recon and MicroPilot’s system requires the addition of just three tiny, lightweight LED lights on the wings and tail of any fixed wing UAS (they are working on a software fix for rotary wings as well) and a bit of software running on a laptop. A camera placed in the landing zone can pick up on the LEDs, do more complex processing than the aircraft’s onboard navigation system is capable of, feed it much more precise positioning data, and bring the UAS in for a precision landing (margin of error: roughly ten feet). A pretty simple fix for a potentially dangerous small-UAS problem. 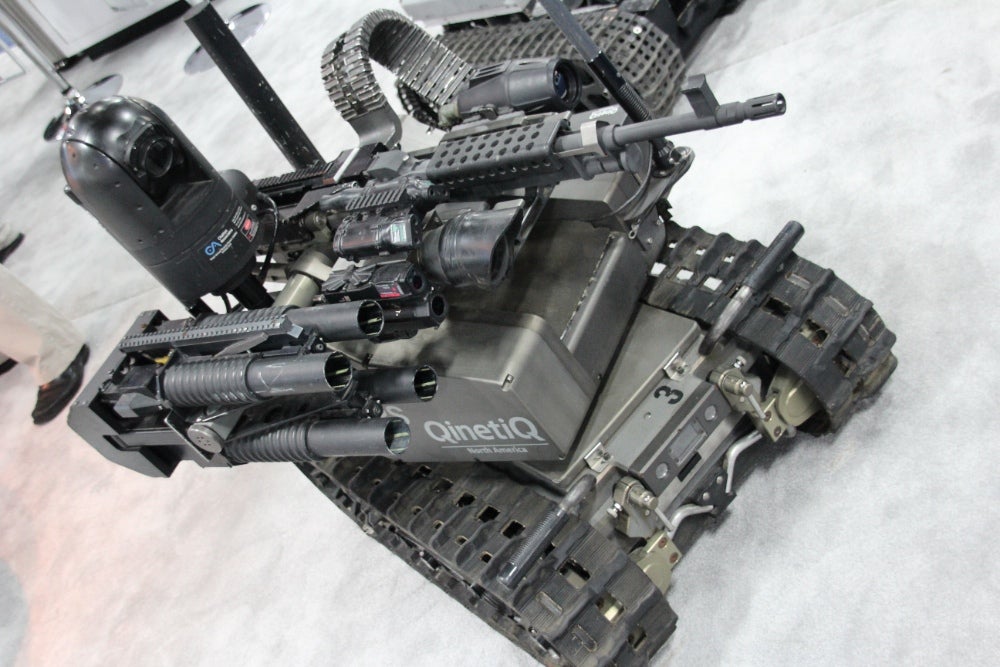 QinetiQ North America’s Modular Advanced Armed Robotic System (MAARS) isn’t new. It’s been around for a few years now, and every year we have to stop and see it. Why? You know that ground robot from Modern Warfare 3 that lays waste to everything in its path? It’s that, but in real life. It can be fitted with all kinds of technologies, including non-lethals. But its most effective non-lethal capability might be the fact that it looks so very deadly. Do not fight with MAARS.
Aviation
Drones
robotics
Unmanned Aerial Vehicles (UAVs)
unmanned systems