Video: The World’s Thinnest Transparent Display is a Soap Bubble

The world’s thinnest transparent screen isn’t really a screen at all, but something more like a soap bubble. An international... 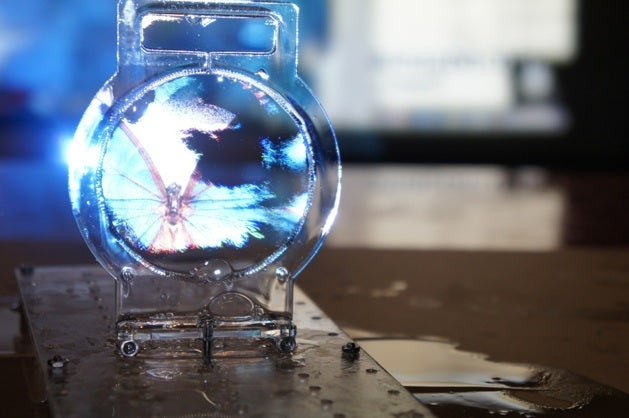 The world’s thinnest transparent screen isn’t really a screen at all, but something more like a soap bubble. An international team of researchers claims its display–which uses ultrasonic sound waves to change the properties of a soap-like film to display both flat and 3-D images–is the world’s thinnest transparent screen, and that using several of them together can even produce a holographic projection.

The bubble itself is made of a mixture that’s more difficult to burst than your average dish soap bubble, though soap is a key ingredient. Augmented with colloids, objects can even pierce or pass through the bubble without destroying it. This membrane-like bubble display can be controlled using ultrasonic vibrations that vary its opacity and reflectance, altering the light projected onto the screen.

More than one of these membrane displays used in tandem can produce even more nuanced imagery, including 3-D effects and holographic projections. All this is explained in far more visual detail in the video below.