At Tissue Engineering Conference, The Future of Endangered-Meat Burgers and Other Treats

Earlier this week, we rejoiced at some promising news about the future of creating tasty meat without killing animals. Today,... 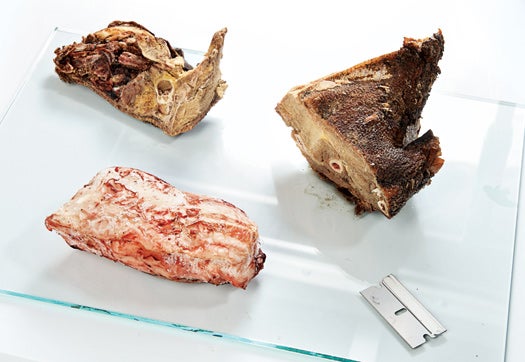 Earlier this week, we rejoiced at some promising news about the future of creating tasty meat without killing animals. Today, New Scientist is reporting from a workshop in Göteborg, Sweden, where Maastricht University meat scientist Mark Post relates his intention to grill up an in-vitro hamburger within a year.

Dr. Post has grown pork in petri dishes, giving it daily exercise to improve its texture. Now he has received an injection of money with which to expand his research into beef. One hindrance is the bloodlessness of lab-grown tissue, which gives it a less-than-appetizing pallor, but the workshop attendees seem optimistic about the practical, ethical, and environmental future of in vitro meat.

Steffan Welin of Linköping University offers the enticing reminder that lab-grown meat need not be limited to the sorts of beasts we typically eat, which have been chosen as much for their ease of cultivation as for their deliciousness. But cells in a vat don’t have to graze or romp, aren’t endangered, and thrive in captivity, so they can be cultured from whatever animal appeals. I think I fancy a hippo steak.