Improvised explosive devices are far and away the single biggest killer of coalition troops in Iraq and Afghanistan, so the... 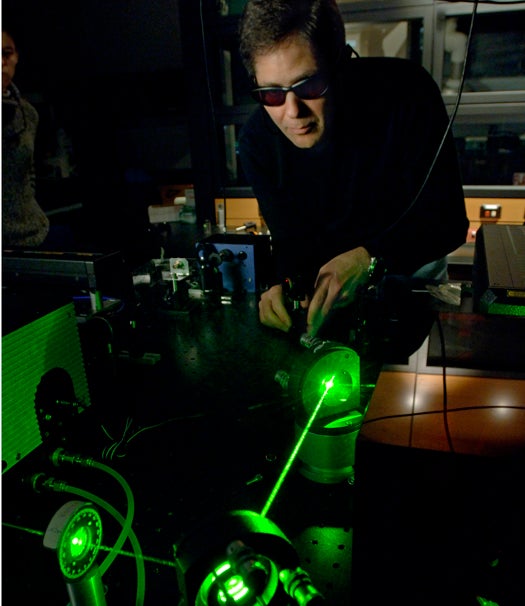 MSU Professor Marcos Dantus works with an associate in his laboratory in the Chemistry building. Kurt Stepnitz
SHARE

Improvised explosive devices are far and away the single biggest killer of coalition troops in Iraq and Afghanistan, so the ability to identify hidden explosive threats is key to keeping soldiers safe. A team of researchers at Michigan State University has developed a tool that could detect roadside bombs from afar, using nothing more than a laser with an energy output of a presentation pointer.

Using light to detect the chemical compositions of molecules from afar is not a new idea, but doing so in uncontrolled environments–particularly in urban environments where the ambient air is cluttered with particulate matter–is extremely difficult. The vast array of compounds in the air can easily cover the telltale signs of an explosive device, and distinguishing between the molecular residues of explosives and various similar benign molecules makes the problem even more daunting.

But the MSU team says it has found a way to use a low intensity laser to make those distinctions even when just a fraction of a billionth of a gram of the explosive materials is present. The beam delivers a one-two punch: short pulses that cause molecules in the air to vibrate and emit signature frequencies that uniquely identify each compound, followed by long pulses that can measure those frequencies and thus identify the molecules.

Just to clarify, these telltale molecules are residuals that are given off by explosive compounds–that is, the explosive itself doesn’t have to be visible or necessarily in direct line of sight. Even buried explosives put off tiny trace molecules into the air, and vehicles boasting a laser molecule scanner could pan the route ahead looking for those indicators of a threat.

To be perfectly fair, we’ve seen IED detectors like this before, and none of them has yet neutralized the IED threat completely (or even mostly). But technologies like this could be huge, given the fact that IEDs account for some 60 percent of coalition soldiers’ deaths, as well as countless more injuries that are often pretty heinous in nature (think: loss of limb). The MSU solution is already partially funded by the Department of Homeland Security, but the team is currently seeking out additional funding to get this technology out of the lab and into the field.