Explosives detection is a hot place for progressive science right now. One Colorado State researcher is breeding plants that change... 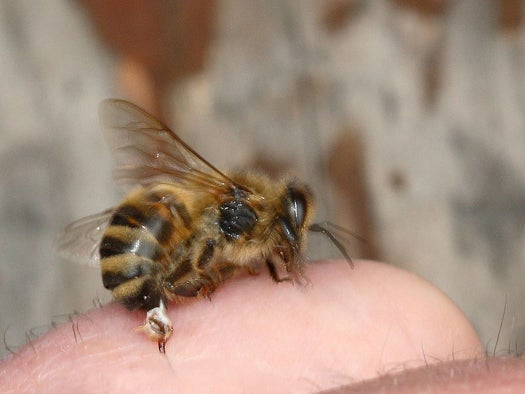 Explosives detection is a hot place for progressive science right now. One Colorado State researcher is breeding plants that change colors when certain molecules come in contact with them, and others are modeling chemical sensors on everything from butterfly wings to frog eggs. Now MIT may have trumped them all with a carbon nanotube and bee venom-based sensor that can detect explosives at the highest resolution: a single molecule.

Of course, first they have to prove that it works in practical application. But as sniffing science goes, their nano-sensor has a lot of potential. The current breed of spectrometry-based commercial sensors deployed in airports, military checkpoints, and other secure areas are far less sensitive, and scaled to the proper size the MIT sensor could make high-resolution mobile detection of nitro-aromatic compounds like TNT a possibility.

The sensors are made by coating carbon nanotubes with peptides normally found in bee venom. These peptides have been characterized before but previously had never been shown to target explosives molecules. It turns out they’re very good at picking up the scent of certain explosives, and when coupled with the natural fluorescence of carbon nanotubes they make a potent sensor.

Other similar carbon nanotube sensors cause the fluorescence of their nanotubes to grow brighter when they come in contact with their target molecules–observe a change in fluorescence, and you have a positive. The new nitro-aromatics sensors work a bit differently, changing the wavelength of the light put off by the sensor. This change, which can be detected with a near-infrared microscope, is less susceptible to interference from ambient light and augments the sensor’s accuracy.

There are limitations though. As it stands, the technology isn’t suited to detecting explosives at a distance, which is somewhat important when you’re trying to keep threats at bay at places like checkpoints. And some researchers worry that detecting at such high resolutions could introduce a tendency for false positives.

Still, at single-molecule resolution it’s as good as a sensor can possibly get. Scaled to the right size and coupled with some means to bring molecules from the ambient air into the sensor (giving it some degree of detection-at-a-distance) it could become another powerful tool in the security toolbox.