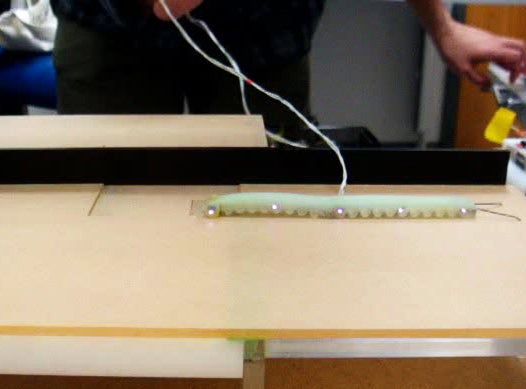 Plenty of people are designing robots inspired by nature’s designs, but most of them are rigid machines made of metal, plastic or polyester film. Fleet-footed robots or hoverbots are unable to bend and squish into tight spaces, but squirmy, agile ones like snakebots can’t move very fast.

A new soft-bodied silicone robot aims to change that, squirming into tight spaces with ease and covering great distances quickly, flipping out like a caterpillar under siege.

The GoQBot, designed at Tufts University, employs a ballistic rolling technique to move super-fast. It is modeled after the escape behavior employed by some caterpillars, which hurl themselves into the air, contorting into a wheel shape and rolling away from a perceived threat.

It is one of the fastest self-propelled wheeling behaviors in nature, according to Huai-Tin Lin, who designed the GoQBot. It was named for the Q shape it takes when it rolls up.

The 4-inch long robot is made of silicone rubber, and its actuators are made of embedded shape-memory alloy coils, according to the Institute of Physics, which is publishing a paper on the robot this week. GoQBot puts track stars to shame with a push-off time of less than 250 milliseconds. It spins at breakneck speed, with an angular velocity of 300 rpm.

GoQBot has infrared emitters on its side to allow motion tracking — and also a pretty cool visual effect. It’s so fast we were unable to grab a screen capture of it in action, so you’ll just have to watch the video below. Lin believes soft robots like this one could be used for faster search and recovery efforts after disasters, like the earthquake and tsunami that devastated Japan.

“The robot can wheel to a debris field and wiggle into the danger for us,” he said.

The study is published in Wednesday’s edition of the Institute of Physics journal Bioinspiration & Biomimetics.