Video: Screechy Theremin Fork Whines When You Try to Eat the Food Impaled On It

We’ve covered theremins before, from DIY pocket theremins to hacks using the Microsoft Kinect and Nintendo Wii. But we’ve never... 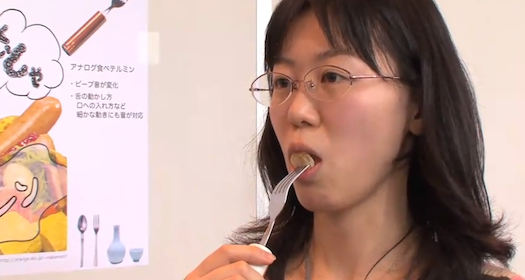 We’ve covered theremins before, from DIY pocket theremins to hacks using the Microsoft Kinect and Nintendo Wii. But we’ve never covered a utensil-based theremin, or a theremin with tines, or even a theremin that uniquely reacts to the texture of chicken skin. Until now.

This fork, demonstrated at Interaction 2011 and profiled by DigInfo, has an embedded theremin that begins making its unique and oddly unpleasant screeching noises once it touches a person, completing a circuit. But the pitch of the theremin changes based on the feedback from the fork’s tines: The more resistance it encounters, as when you’re gnawing on something particularly tough or chewy, the lower the tone. Oh, and it has a cute name: the EaTheremin.

According to the video’s narrator, “Flexible items like chicken skin can generate vibrato effects as they stretch,” so theoretically you could put together a dish that produces a melody, based on the textures you choose. The video above is worth watching if only for the uncomfortably close shots of the spokesperson gnawing sausages and fried chicken. We just hope she made it through the day without feeling too ill.