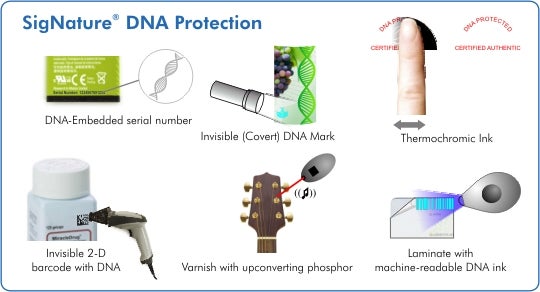 Counterfeiters are skilled at making knockoffs of even the most high-end tech and luxury products. But one European luxury goods company has decided to fight back by putting plant DNA markers in its products to identify the real deal, the Toronto Sun reports.

The unnamed luxury goods company has enlisted the services of Applied DNA Sciences, based in Stony Brook, New York. Applied DNA whips up specially tailored plant DNA that can be used in fabrics, dyes or glues to make each product genetically unique. It then collects a fee for each authentication mark purchased, and also for providing an authentication service if a product’s veracity is in question.

Applied DNA has already helped UK law enforcement convict two men involved in a cash delivery van heist, according to the Financial Times. The DNA marker in that case was added to the dye that is normally released when cash boxes are opened or moved illegally. Criminals can remove the dye with proper cleaning, but the long strands of plant DNA remained and allowed police to easily identity the culprits using handheld scanners.

Color-changing ink, special polymers and holographs can also help create special anti-counterfeiting markers. But we’re tickled by the idea of DNA markers that can supposedly survive unchanged for 350 years. As the company’s “SigNature” logo says, genetic markers are the ultimate reality check.

[via Toronto Sun and Financial Times]