In the name of science and sport — and presumably to highlight its sponsorship role in the 2010 FIFA World... 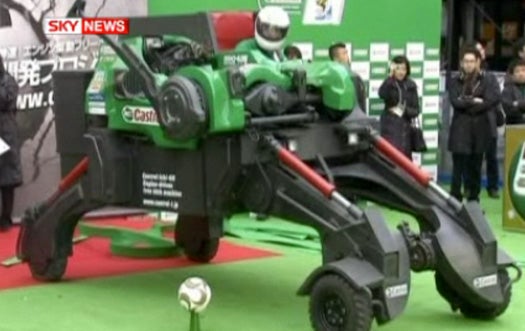 In the name of science and sport — and presumably to highlight its sponsorship role in the 2010 FIFA World Cup — motor oil company BP Castrol constructed this massive auto-engine-powered kicking ‘bot that can boot a soccer ball past (or through) goalies at a whopping 128 miles per hour.

Developed by artist Kogoro Kurata, the machine runs on an automobile engine with differential gears that stores up energy in a flywheel that is then released to the steel and carbonfiber leg. The two-ton machine itself rolls around on electric engines rather than the kicking engine.

Video of the finished product working in front of a live audience can be seen on the World Cup Blog, but we like the videos below that were captured in the workshop, one in real time and the other in slow-mo, which is more or less necessary to witness this goal-busting bad boy in action.