Advances in robotics have lead to automatons that can do everything from ski to open doors to help the elderly.... 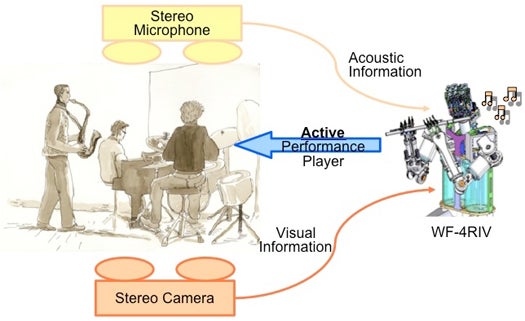 Advances in robotics have lead to automatons that can do everything from ski to open doors to help the elderly.

Now, thanks to the Takanishi Laboratory at Waseda University in Japan, robots have learned a new trick: how to jam.

Waseda University had created robots that play musical instruments before, but simply replaying a recorded piece wasn’t enough. Researchers created an algorithm that allows the robot to combine visual cues from its cameras with audio cues from its mics to actually respond to a human partner. So far, the robot can only mimic what a human plays, but eventually, the researchers hope the robot can begin improvising and deviating from mimicry. One day, this bot will really swing.

In the video below, a human saxophone player plays a couple of notes, and the robot responds. The playback isn’t perfect, and the robo-flutist hardly gives Roland Kirk a run for his money, but this is the first step towards a truly hep bot.