The 2001 anthrax attacks could have made the USPS more secure. Instead it’s more vulnerable than ever. 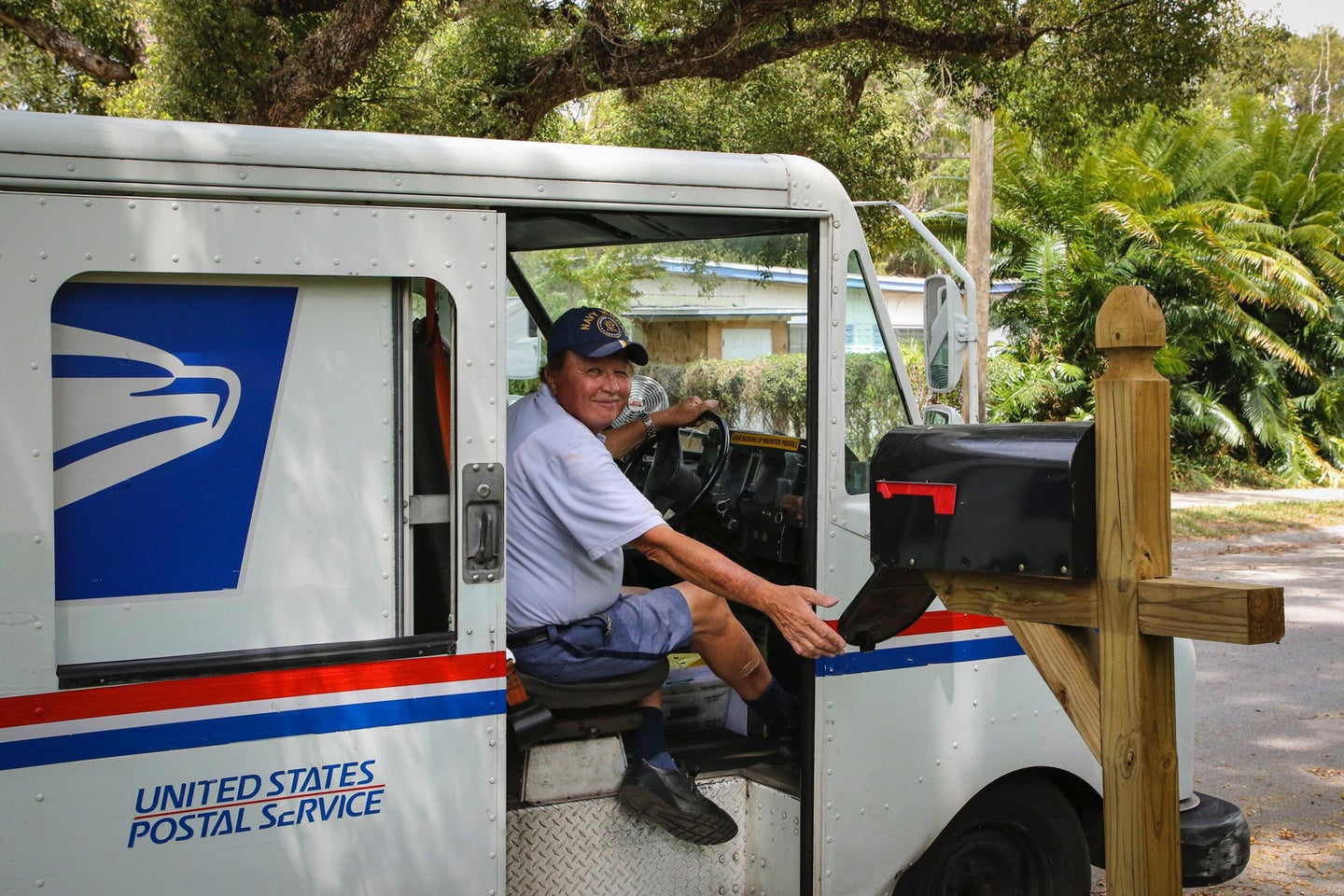 The spread of COVID-19 has put a spotlight on delivery workers. Letter carriers, Instacart shoppers, and Amazon delivery workers are critical—they deliver food, medicine, and other essential supplies. They go out to work so that others can stay home. The current health crisis highlights how important these workers are. Yet, the health and safety of these workers is often overlooked. During the past few weeks, delivery workers have organized and agitated for better health and safety provisions, seeking paid sick leave, adequate personal protective equipment (PPE), and other basic protections and accommodations. The ultimate success of these efforts is an open question—the politics of risk are, after all, always promiscuous.

The excerpt featured below is adapted from Letters, Power Lines, and Other Dangerous Things: The Politics of Infrastructure Security. It speaks to the current moment and offers a cautionary tale. It uncovers how the security provisions adopted after the 2001 anthrax attacks traded away the health and safety of postal workers in favor of cheap and fast mail.

Ryan Ellis is assistant professor of communication studies at Northeastern University. He is the author of Letters, Power Lines, and Other Dangerous Things: The Politics of Infrastructure Security and co-editor of Rewired: Cybersecurity Governance. This story originally featured on the MIT Press Reader.

In 2001, an unknown number of letters containing spores of anthrax were sent through the U.S. postal system, exposing scores of postal workers and patrons to possible harm. Five individuals died as a result of anthrax exposure (22 were infected) while over 30,000 people were given prophylactic antibiotic treatment. According to estimates compiled by the National Research Council, one-third of the U.S. population took extra precautions in handling the mail during the attacks. The economic impact of the attacks was staggering: Postal facility cleanup ran into the hundreds of millions of dollars while declines in letter volume, productivity, and new security measures amounted to roughly $6 billion.

Suddenly, one of the more mundane aspects of daily life—opening the mail—became imbued with danger and unease. Panic ran high: Hoaxes and false alarms involving letters thought to contain anthrax became common disruptions; the investigative arm of the United States Postal Service (USPS), the United States Postal Inspection Service (USPIS), dealt with over 17,000 such incidents and evacuated over 600 postal facilities in the year following the attacks. As Chief Postal Inspector Lee Heath noted, the anthrax letters were a “weapon of mass disruption.” While not reaching catastrophic levels of harm, the tragic deaths of five individuals, compounded by widespread anxiety and far-reaching economic consequences, elevated the attacks into a disaster. The attacks destabilized the continued flow of mail; imperiled, to a degree, the health of workers and patrons; and introduced potentially ruinous costs for the already financially precarious USPS.

Postal workers and the commercial mailing industry wrestled to define the terms on which new forms of postal security would rest. Labor and commercial mailers viewed the problem of biological terrorism through starkly different lenses: Workers viewed it as a workplace safety issue, while the mailing industry—companies relying on mailings as a central component of their business, including direct mailers that advertise for clients and catalog merchants—worried about disruptions to the smooth functioning of the postal network. These interpretations focused on different objects of concern—the protection of worker health, on the one hand, and the preservation of network functionality, on the other—and, unsurprisingly, led to disagreements over the contours of new security standards.

Unions representing postal labor viewed the attacks as assaults on the postal workforce. Labor was sharply critical of the initial failure of postal management to contain the spread of anthrax. Cross-contamination affected postal workers directly: Nine postal workers contracted anthrax from cross-contamination, and testing eventually confirmed the presence of anthrax in over 23 different postal facilities. The American Postal Workers Union (APWU), the largest postal union, led a walkout of workers in New York City and filed three lawsuits in U.S. district courts, charging USPS with failing to provide a safe workplace. APWU president William Burrus publicly accused postal management of offering different levels of safety for government officials and postal workers. Burrus pointed out that the Supreme Court and congressional offices were closed at the first hint of possible anthrax exposure, while postal facilities, in some cases, remained open even after anthrax had been discovered. As Burrus framed the issue: “Are the lives of postal workers less valuable than the lives of U.S. senators? Are the lives of postal workers less valuable than the lives of Supreme Court justices? What value do our lives have?” William Smith, president of the New York Area Metro Postal Union, drew the same conclusion. “I realize that [postal] employees are not Supreme Court justices or senators or Congress,” he told the New York Times, “but they are God’s children; they have the same right to life as the aristocrats.” “No one piece of mail,” he added, “is worth a human life.”

While labor viewed biological terrorism as an attack on the bodies of postal workers, the mailing industry saw the “health” of the network as the central object in need of protection. Commercial mailers moved to protect the network. They worried that if the public lost confidence in the safety of the mail—refusing to accept “junk mail,” catalogs, and other forms of mail out of an abundance of caution—their businesses would be destroyed. Trade associations such as the Association for Postal Commerce, Mailers Council, and the Direct Marketing Association called for postal management to take steps to quell safety concerns. Yet commercial mailers also worried about the side effects of new layers of security. They warned that adopting poorly designed security efforts could jeopardize the two qualities that made the mail an attractive commercial medium: low cost and timely delivery.

The concerns of large bulk mailers were not to be taken lightly: By 2001, roughly 75 percent of all mail was sent by bulk mailers, who have historically played a significant role in dictating postal policy. Although both labor and industry advocated for new forms of postal security, commercial mailers offered a crucial caveat: New security measures could not increase the postage rates charged to large bulk mailers or impose delivery delays. Commercial mailers wanted new forms of security to restore confidence in the mail while preserving the speed and economy of the network.

The Postal Service found itself in a difficult position. Its two most powerful and vocal constituents, labor and large mailers, aggressively pushed for new forms of security—implicitly and explicitly questioning postal management’s initial response to the attacks—although their aims chafed. Labor’s prioritization of worker safety would likely lead to added costs and delays in postal processing; mailers called for security but refused to accept new practices that would add costs or jeopardize the speed and convenience of the mail. In order to reconcile this tension, the head of USPS, Postmaster General Potter, created a new working group, the Mail Security Task Force (MSTF), in October 2001 to consult with the Postal Service on new security practices. The task force broke with long-standing postal policy and brought together management, senior leadership from the postal labor unions and management associations, and representatives of the mailing industry. This was a significant change. Decades of pro-market reforms had given large mailers unrivaled power to dictate postal policy. For years, powerful mailers had enjoyed exclusive access to postal management through the Mailers’ Technical Advisory Committee, a public-private partnership run by the mailing industry and the Postal Service that was closed to union participation. The MSTF was different: It included both union leaders and the voices of commercial mailers.

The MSTF underscores the political potential and limitations of novel forms of risk. In this case, labor’s agitation sparked institutional innovation. The anthrax attacks, and the uneven initial response by USPS, provided labor with a highly visible management “failure.” Postal management’s initial inability to grapple with cross contamination allowed labor to level powerful charges of unequal treatment. The larger backdrop of the unfolding war on terror and a ramping up of concern over homeland security was baldly significant. The recasting of infrastructures of dangerous things seemed to find its perfect expression in the 2001 anthrax attacks: even the postal system could be a target. Against this backdrop, postal workers struck a different note than commercial mailers. Workers made it clear: They were the network.

Commercial mailers posited a view of the postal network that was depopulated—their concerns over the smooth functioning of the network glossed over the people that actually made the system work. Workers were explicit: It was their bodies that were imperiled by the anthrax attacks. Labor seized on the salient threat of terrorism to upend the status quo and, briefly, secure a more prominent place in postal policy. Risks can, in certain instances, serve as a catalyst that supports the democratization of formerly closed institutions. Postal workers leveraged safety concerns to wedge open postal governance. The MSTF, on its face, offered a more democratically minded form of governance that at least nominally enfolded those most directly subject to the bodily harm inflicted by the anthrax attacks—postal workers—within its deliberations. In this manner, security concerns appeared for a moment to lead to new types of accountability.

Yet the power of the MSTF was circumscribed. The MSTF’s recommendations were informal and nonbinding; the Postal Service retained final authority over security policy. The invitation to join the MSTF placated the concerns of postal workers for a time. Now, finally, labor could join commercial mailers in providing postal management with advice outside of highly formal rate cases or the negotiation of collective bargaining agreements. However, postal workers soon realized that access is not quite the same as power. Labor would quickly find out that commercial mailers still held the power to shape postal policy. Risk, as a political resource, transformed to a limited degree the governance structure of postal decision-making, but as newly adopted security standards would make clear, in this case risk did not reorganize the basic structure of power within postal politics.

In the coming years, the new technologies designed to scan the mail for biological hazards and track the movement of mail through the system would prove to be a bitter frustration for postal workers, while large mailers got precisely what they always wanted—cheap and fast mail. A moment of possible transformation and reordering would slip through the fingers of postal workers.