This new space probe will go farther and faster than any before, gathering data for generations

Voyager gave scientists a taste of the space between the stars. Now they’re hungry for more. 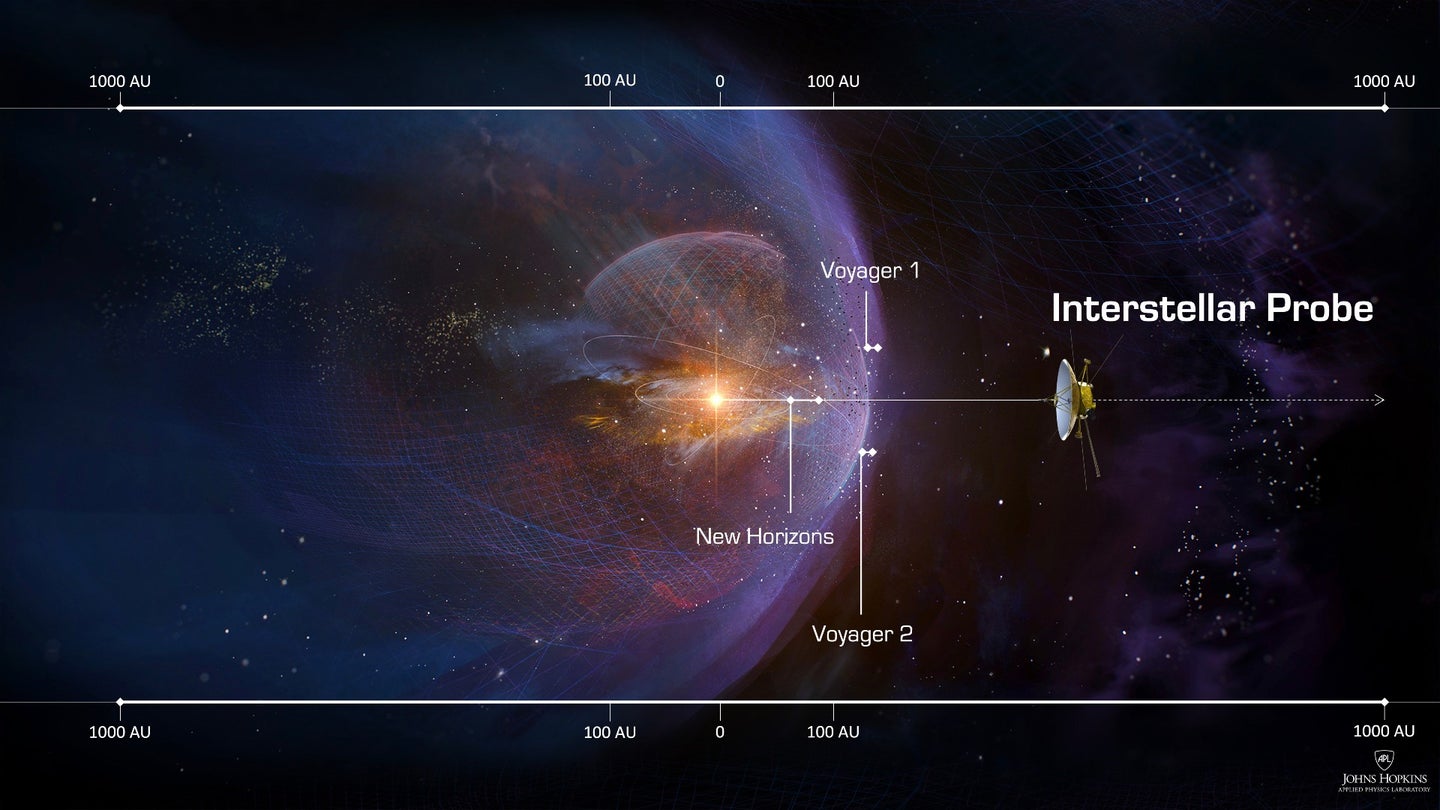 An interstellar probe could completely exit the protective bubble around our sun, giving researchers an external view of our solar system. Johns Hopkins APL
SHARE

We live in the center of a giant ball of plasma, inflated by the sun while it hurtles through interstellar space. To find out more about how that bubble behaves as the sun drags it around the galaxy, scientists who study our beloved ball of hot air are keen to get outside our protective bubble and take a closer look. But they’re going to need a speedy and capable probe to do it.

Humanity’s first two excursions into so-called interstellar space happened by accident. Voyager 1 and 2 took advantage of a once-in-a-175-year alignment of the planets to give researchers an up-close look at Jupiter, Saturn, Uranus, and Neptune between 1979 and 1989. The probes did that, and then kept going, embarking on a second mission to the edge of the sun’s influence that was never intended—but nevertheless revolutionized our understanding of our star’s place in the galaxy.

For this next trip—aptly named the Interstellar Probe mission—researchers plan to go prepared. To that end, a team from the Johns Hopkins University Applied Physics Laboratory presented the current status of the initiative, which has grown to include well over 100 scientists, on Monday at the European Geosciences Union General Assembly. They say that current technology makes it possible to go further than Voyager did in less time, and discover even more about our solar system in the process.

“This is like a candy store for scientists,” said Pontus Brandt, a physicist at John Hopkins and mission project scientist in a recent seminar discussing the project. But “without a solid plan for execution, this would remain a dream or even a hallucination.”

Brandt has been dreaming about interstellar exploration for decades. He spent his early career doing plasma physics research in the Arctic circle, where pitch dark skies and expansive stellar views made the rest of the galaxy feel unusually close.

NASA got serious about a Voyager successor relatively recently. There had long been interest in another interstellar probe, but no one wanted to wait another 40 years while it made its way beyond the sun’s influence. By 2019, however, the end of development of NASA’s next-generation rocket, the Space Launch System (SLS), was in sight, and the space agency was wondering what might be possible with its powerful new ride. Brandt met with the program director and explained how SLS’s brawn could enable a relatively swift interstellar mission.

[Related: How the most distant object ever made by humans is spending its dying days]

The SLS, which could see its first launch as early as this year, is designed to send dozens-of-ton payloads on leisurely trips to low Earth orbit, the Moon, and Mars. Or, Brandt says, it could blast a roughly one-ton probe into deep space in a hurry.

The spacecraft would travel twice as fast as Voyager, and with the help of a speed boost from Jupiter, it could reach the inner edge of the plasma envelope surrounding the sun in just 12 years. It would then continue on into interstellar space, reaching ten times farther from the sun than Pluto’s orbit within 50 years of launch—more than twice the distance at which the Voyager probes are expected to power down. The mission would dwarf all of NASA’s previous undertakings in terms of both distance and duration.

“This is not just another mission,” Brandt says. “This is humanity’s first step into the space between the stars.”

If the Interstellar Probe ever gets that far, its main mission will be to figure out how the space out there differs from the space in here—”in here” being the space near our star.

We live quite close to the center of a giant magnetized bubble helpfully blown by our sun. The bubble is largely filled with an extremely thin plasma — a sort of hot gas made from charged particles. As the sun heats up nearby atoms, it breaks them apart and the resulting charged ions stream outwards along its magnetic field in a solar wind, inflating the “heliosphere.” This heliosphere protects us by deflecting perhaps 70 percent of the potentially harmful cosmic rays the cosmos flings toward the solar system.

Astronomers have snapped images of similar bubbles around other stars (known generally as “astrospheres”), and found that they can take all manner of shapes, depending on how briskly the stellar wind blows, how quickly it plows through the surrounding plasma and dust of interstellar space, and how dense those plasma and dust are.

But our heliosphere remains largely invisible to us. While probes such as Cassini and IBEX have managed to discern some broad features, researchers disagree on how to interpret their findings. Perhaps our solar system drags a long tail behind it like a comet. Or perhaps the heliosphere billows off to the sides to form a croissant. From our perspective in the center, it’s tough to tell. “You’re inside a cloud and you’re trying to figure out what it looks like,” Brandt says.

An interstellar probe could look back and chart the first definitive map of our heliosphere from an external vantage point.

And that’s just the beginning of what the probe could find. The twin Voyager spacecrafts solved some mysteries (theorists expected the solar wind to drop off near Saturn, but the probes encountered a “termination shock” boundary more than 10 times farther away), while uncovering many more. The interstellar plasma looks oddly chilly, the sun’s magnetic field appears to extend way too far, and the whole bubble pulses with solar activity.

On top of its sun-related goals, the Interstellar Probe collaboration is also analyzing the feasibility of adding cameras. A visible light device could take close-ups of a Pluto-like dwarf planet called Quaoar, which appears as just a dim speck in terrestrial telescopes. An infrared instrument could capture the diffuse background glow of interstellar space, which contains light from the universe’s earliest galaxies.

A new kind of thinking

The group will publish its final report within a year, after which it will be up to NASA to decide whether to officially develop the Interstellar Probe. If the agency selects the mission, the spacecraft could head to the launchpad in the 2030s, Brandt says.

And NASA isn’t the only space agency formulating such plans. Chinese researchers are developing a similar mission that could unfold along similar timescales. “We talk to them a lot. We’re all terribly excited about this,” Brandt said.

For either project to succeed will require a new kind of thinking. A mission that launches in the 2030s and does the bulk of its measurements between the 2040s and the 2080s would span generations. And the researchers laying the groundwork for it now know they may never see its data. Brandt calls the experience of working such a project “humbling,” and describes the time horizon as just one more design constraint, like power or mass.

“We baked that quantitatively into our planning,” he says. “How do you bring aboard young people? You don’t go to colleges. You’ve got to go to middle schools.”