They put a burden on women in books—and on people in real life. 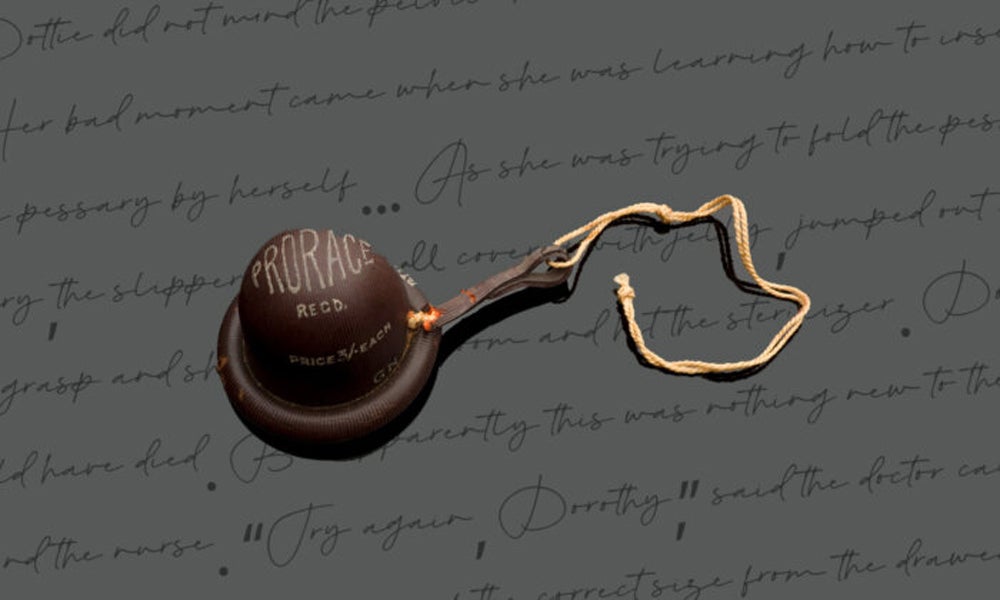 Donna J. Drucker is senior adviser in English as the Language of Instruction at Technische Universität Darmstadt, Germany. She’s most recently the author of Contraception: A Concise History. This story originally featured on MIT Press Reader.

Women have used internal barriers in an attempt to prevent pregnancies as far back as ancient Egypt. However, they only became widely known and used after World War I, when they became available commercially and via birth control clinics in the US, UK, Germany, and Austria. As these devices became more widespread, they gradually began appearing in novels and plays: Writers from Mary McCarthy to Philip Roth used them to symbolize specific moments in women’s sexual and reproductive lives, their growth into adulthood, and their romantic—often extramarital—relationships.

While barriers provided women with contraceptive control, the symbolic implications of these devices went far beyond control alone. In “The Group” (1954), for example, Mary McCarthy describes a young woman’s visit to a New York City gynecologist around 1933, portraying a woman’s first cap or diaphragm fitting as amusing, if somewhat embarrassing:

“Dottie did not mind the pelvic examination or the fitting. Her bad moment came when she was learning how to insert the pessary by herself … As she was trying to fold the pessary, the slippery thing, all covered with jelly, jumped out of her grasp and shot across the room and hit the sterilizer. Dottie could have died. But apparently this was nothing new to the doctor and the nurse. “Try again, Dorothy,” said the doctor calmly, selecting another diaphragm of the correct size from the drawer. And, as though to provide a distraction, she went on to give a little lecture on the history of the pessary, while watching Dottie’s struggles out of the corner of her eye.”

The idea of a diaphragm or cap as an inherently hard-to-handle device also came to life in Margaret Foster’s “Diary of an Ordinary Woman, 1914−1945” (2003), in which the protagonist, Millicent, lies to a clinic worker about being married to obtain a cap from a woman’s clinic in August 1930. “Twice the cap slipped out of my fingers and went whizzing across the room and she laughed but I did not,” Millicent writes in her diary. “She put the cap into a tin box and gave me a tube of the spermicide and said to come back if there were any difficulties.” While McCarthy and Foster portrayed fitting barrier contraceptives as humorous, the incidents marked adulthood and an active sex life as newly strange and messy as well. They also addressed social class issues regarding contraceptive access. Clinic workers in the early 20th century often dissuaded the poor and “unfit” from having children, so Millicent’s sister Tilda advised her “to dress as dowdily as possible” so as not to stand out.

Barrier contraceptives also served as symbols of a young person’s rejection of, or challenge to, cultural or religious values regarding premarital sex. In Philip Roth’s 1959 novella “Goodbye, Columbus,” the protagonist’s (Neil’s) lover, Brenda, leaves a diaphragm in a bureau drawer at her childhood home, where her mother finds it and writes her a tearful letter. Brenda and Neil have an argument in which he accuses her of letting her mother find the diaphragm deliberately as an excuse to break up, though Brenda denies it. Here, Roth positions the diaphragm between Brenda’s desire for premarital sex and her ambition to stay in her parents’ good graces. Whatever her motivations for leaving the device where her mother could find it, the romantic relationship ends.

In Andrew Davies’s 1980 play “Rose,” the presence of a barrier contraceptive signals an extramarital affair. The title character uses a diaphragm with her husband Geoffrey to prevent pregnancy regularly, and he notices its unusual absence one night.

Geoffrey’s discovery of the missing diaphragm triggers Rose’s unrepentant confession that she had sex with one of her supervisors and marks the end of their marriage. It is notable that the two male authors—Roth and Davies—who used diaphragms as plot points used them to signal immaturity and infidelity in women, and to show how women’s control over contraceptives hurt and deceived men.

While the diaphragm’s presence in “Rose” indicated a woman having sex willingly outside her marriage, Paddy Kitchen’s 1971 novel Linsey-Woolsey uses the forced removal of a cap as a sign of disregard for a woman’s reproductive agency. Near the end of the book, the characters Barnett and Henrietta are about to have sex—she is married, he is not.

Henrietta consents to conceptive sex after Barnett “lulls her” into desiring it, and the phrasing “allowing her body to make a true union” implies that they had simultaneous orgasms. This scene is an instance of what Milena Popova, a sexual consent researcher, calls “unwanted sex,” sex to which someone consents in a legal sense but does not want. Henrietta’s initial act of protection against pregnancy is cast aside in favor of her new partner’s desire to conceive. The scene shows how popular mid-20th-century rhetoric that the cap and diaphragm placed contraception “into women’s hands” was unable physically to stop a partner who had no problem removing the barrier, and her desire to contracept, himself.

Barrier contraceptives in the lives of older, often married characters take on yet a different role. Mary, the main character in Gillian Tindall’s novel Looking Forward (1983), approaches the subject with her extramarital partner Laurie in 1950s England after they have had sex several times: “But you know I don’t use a cap or anything. You’re an experienced man, you must have realized,” she tells him, to which he replies, “Yes, I know, I’m sorry, it was wrong of me, but—oh, Laurie! I can’t start using a contraceptive. Not now, after so many years of hoping.”

Her non-use of a contraceptive indicates her desire for a child, even though a prospective child’s father would not be her husband. Mary’s childlessness is poignant, as she has been a gynecologist and birth control advocate her whole adult life. Even after fitting hundreds of working-class women with caps, she still associates cervical cap use with women who need contraception because they cannot afford to have more pregnancies. For her, the cervical cap is a marker of class and economic need, as well as a desire to limit fertility, and she cannot bring herself to use it.

Taken together, these authors use the diaphragm and cervical cap to signify extramarital sex, working-class status, embarrassment, sorrow, and the onset of adulthood. Rarely does one find references to them as part of a joyful or pleasant sexual encounter. They interrupt passion, pair messily with spermicide, and are a woman’s unpleasant yet necessary responsibility.

Perhaps the happiest end for a cap was in Margaret Drabble’s The Waterfall (1969): “[Jane] disliked it so much that when [her son] found it lying in a drawer one day she let him take it out and sail it in the bath for a few nights, until he was bored with it, and it perished.”