DESI will make a map of many millions of galaxies to chart the impact of dark energy. 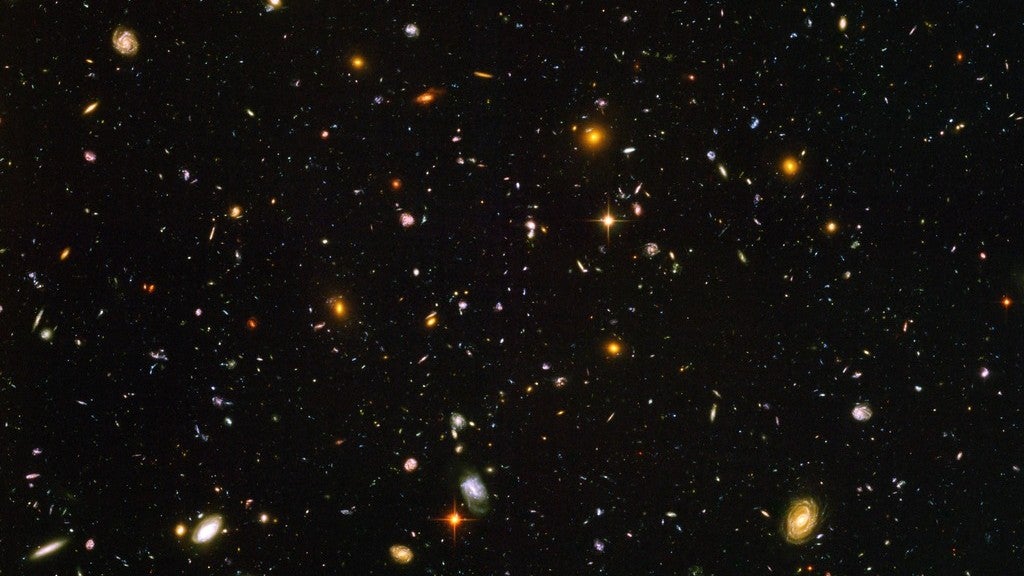 A newly retrofitted telescope will map out millions of galaxies in the next five years and shed light on dark energy’s role in the grand structure of the universe. The Dark Energy Spectroscopic Instrument (or DESI to her friends) just formally went online after several months of preliminary tests.

The instrument’s main goal is learning more about dark energy—the pesky, inscrutable substance we can’t see, smell, or touch, that’s fighting gravity and tearing the universe apart. Other telescopes have done similar surveys, but DESI has a trick up her sleeve—automation.

“You can imagine DESI as being 5,000 robots that each act independently,” says Kyle Dawson, an astronomer at the University of Utah and a spokesperson for the international project which is managed by Lawrence Berkeley National Lab in California. DESI has already captured 4 million spectra, akin to light fingerprints, of galaxies in its trial run.

The instrument works with each robot holding an optical fiber pointed at a patch of sky. Light travels into all 5,000 fibers at once, and the fibers bundle together and lead those light signals to a spectrograph—an instrument that, sort of like a prism, breaks the light up into its distinct colors. This will let astronomers measure the “redshift”—how much redder things appear when they’re moving away from us—of many galaxies to get a handle on the expansion of the universe.

[Related: Tiny galaxies may have brought the cosmos out of the dark ages]

“I think it’s one of the more ambitious dark energy projects we’ve ever undertaken,” Marc Postman, an astronomer at the Space Telescope Science Institute who is not involved in the project, says of DESI.

Dawson says the project is all about the redshifts and using data from millions of different galaxies to paint a picture of just how the universe is expanding at the hands of dark energy. One thing they’re looking for is “clustering,” a measure of how much galaxies in the great nothingness tend to clump together; the pull of dark energy changes how galaxies cluster over time. Measuring how much clustering occurs lets researchers figure out how strong an effect it has, Postman says.

With each fiber taking only about 20 to 30 minutes to complete a single exposure, the instrument can take tens of thousands of individual snapshots per night. In a previous version of the experiment, Dawson says the optical fibers were aligned with their targets by hand, which took about 20 minutes each run. But with the process automated, the robots should only take about 2 minutes to home in on a new target.

When it began operation in 2000, the similar Sloan Digital Sky Survey was “a big leap forward,” Postman says. That instrument gathered just 600 different spectra at once, compared to DESI’s 5,000.

DESI will help scientists look for telltale features from the early universe which have been imprinted on the cosmic microwave background in a kind of snapshot.

The pattern of microwaves isn’t uniform—certain areas are denser than others, thanks to what were essentially sound waves traveling through the compact early universe. Over billions of years, those patterns influenced where galaxies and all kinds of matter ended up as the universe continued to grow.

[Related: Glimpse the gold mine where scientists are searching for dark matter]

By comparing the ancient pattern to a detailed map of galaxies—here’s where DESI comes in—you can learn about the rate at which the universe has been expanding over time, and consequently, how much dark energy is hanging around, tugging it apart.

The project is being done via a retrofit of the Nicholas Mayall 4-meter Telescope at Kitt Peak, which, when it started up in 1973, was among the largest telescopes in operation. One of its most notable accomplishments was finding methane ice on Pluto in ‘76. But the Mayall telescope was becoming obsolete beside bigger and better telescopes, Postman says.

Dawson says during the pandemic, it’s been harder to send people to DESI in person. He hasn’t seen her yet, “But that’s no excuse,” he says. “I should have gone down there before.”

Correction: An earlier version of this story oversimplified the relationship between dark energy and galaxy clustering. The text has been modified for clarify.