When I was taking chemistry in college, the mass spectrometer was a desk-mounted machine about twice the size of a... 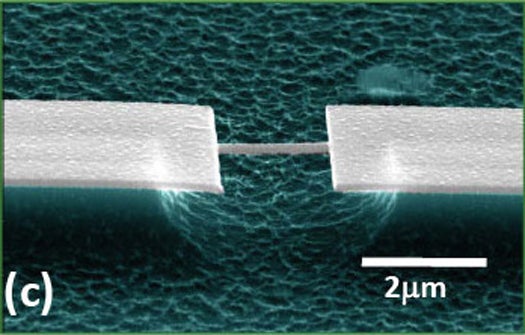 When I was taking chemistry in college, the mass spectrometer was a desk-mounted machine about twice the size of a PC. Oh, how times do change. Researchers at the California Institute of Technology have created the first nanoscale mass spectrometer. Only four micrometers across, the device can measure the mass of single molecules in an entirely novel way.

Unlike traditional mass spectrometers, which use a variety of electromagnetic mechanisms for determining the mass of particles, the nano mass spectrometer is more like a tuning fork. Its two resonators vibrate at a set frequency. When a particle lands on the resonators, their frequency changes proportionally to the mass of the particle. This method not only provides precise measurements, but it does so using a fraction of the material needed in a regular mass spectrometer.

In the future, the researchers hope to run hundreds or thousands of these mass spectrometers in parallel, creating a chip that can read the masses of thousands of proteins at once. A chip like that could be used to precisely monitor exactly what’s going on in a cell, take instantaneous readings of the chemical makeup of someone’s blood, or measure the exact constitution of pollution in the air.

[via California Institute of Technology]