The Breakdown: Defying Death at the Gym 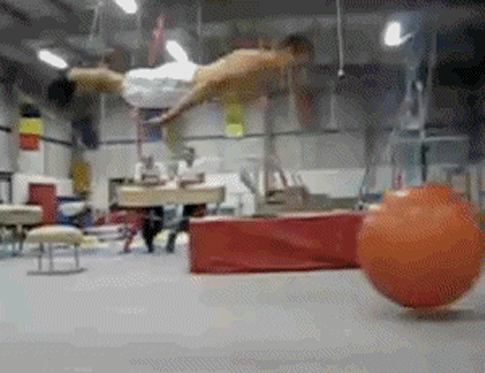 Who isn’t amused by the rare and impressive science-savvy party trick? One that involves the potential to risk death death by flinging yourself Superman-like at a bouncy training ball, only to have it pop you back up in an amazingly graceful backflip? Before you cry “Sir Isaac Newton!,” here are the physics behind this seemingly impossible stunt.

Exhibit A: The trick at hand, looped for your enjoyment:

This trick makes use of the principle of conservation of momentum, in both linear and angular form! Now you can oooh and aaah. According to this principle, in the absence of external forces on an object or a system of objects the total momentum of the system will remain constant.

In order to get the ball, and “the guy”, moving in the first place we need external forces. But once they’re in motion, the combined momentum of the guy and ball just before and just after the collision will be the same. Now, neither “the guy’s”, nor the ball’s, momentum changes as a result of the collision, but as a system of two objects the total is constant. However much momentum one object (like “the guy”) gains is exactly equal to the amount the other (the ball) loses.

Let’s see how this plays out in this particular stunt. Before the collision, the total momentum of the system consists of the combined linear momentum of the ball and the guy, as well as the ball’s angular momentum (due to the fact that it’s rolling). Linear momentum (p) of an object is equal to the mass of the object multiplied by the velocity of its center of mass. Mathematically

and as we mentioned above, the total momentum is conserved in the collision. So:

Notice how the guy’s forward motion essentially stops as a result of the collision. (We’ll get to the rotation in a second.) His linear momentum decreases. In order to conserve momentum, the velocity of the ball must increase as a result of the collision, which is exactly what happens. The guy experiences a force from the ball reducing his momentum, but Newton’s third law– the law of action and reaction– says that the guy pushes with an equal force back on the ball. The ball therefore increases its momentum by exactly the same amount as the guy’s decreases. Total momentum is constant. Physics in action!

Angular momentum (L) has to do with the momentum of a rotating object.

I is something called the rotational inertia of the object and depends not only on its mass but where the mass is distributed, and ω is the angular velocity (or rotation rate). To change the angular momentum of an object you need a torque, which, for our purposes, we can think of as a force acting away from the center of an object’s mass. Analogous to the linear case, if two objects exert torques on each other, the total angular momentum will be conserved because the torques are interior to the system as a whole.

As the guy collides with the ball, he pushes off with his feet. He applies a torque to the ball, thus speeding up its rotation rate. Not to be outdone, the ball applies a torque back on the guy, causing him to spin in the opposite direction. The result of all of this: the ball speeds up, the guy slows down, and he starts spinning in the opposite direction to the ball. Linear and angular momentum are conserved, he sticks the landing, and everyone is happy! Now that’s impressive.