Science and Religion: Bridging the Divide

An Interview with Rev. Dr. John Polkinghorne, author of the new book, Questions of Truth: Fifty-One Responses to Questions about God, Science, and Belief 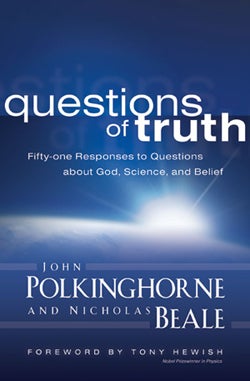 Over the last century, science and religion have been like oil and water: They just don’t mix. Scientists and people of faith seem to disagree about everything, particularly when it comes to hot-button issues like evolution and stem cell research. But not everyone thinks the two groups should be so polarized. John Polkinghorne, a theoretical physicist who worked at Cambridge for 25 years before becoming an Anglican priest in 1982, has spent his career trying to bridge the divide. In his newest book, Questions of Truth: Fifty-One Responses to Questions about God, Science, and Belief, Polkinghorne tackles some of the thorniest religious and scientific issues of the day. Popsci.com caught up with him to answer a few of our own questions.

Popsci.com: What is the most common question you receive about science and religion?

John Polkinghorne: I’m most frequently asked how they relate to each other. I think they relate to each other as friends and not foes—they are cousins that are both seeking truth. The question of truth is as important to religion as to science. Religious faith is not a question of shutting your eyes, or intellectual suicide. Science tells us how the world works, and religion is concerned with why things are the way they are.

PS: In your book, you’ve stated that you believe human life starts at conception, but you think it’s okay to use embryos for stem cell research, as long as they’re less than 14 days old. Can you explain?

JP: I think you have to distinguish between human life and being a human person. I think personhood is something the embryo grows into. Before 14 days, an embryo might divide into twins. So it can’t possibly be a person by then. Before 14 days all the cells in the embryo are all the same. After 14 days, other cells, such as nerve cells, will form.
So I’m quite happy with the 14-day rule.

JP: I’m pleased that he’s done so. What I would like to see in the United States is a stronger regulatory mechanism. In the United Kingdom, you can only do embryonic research before 14 days. In the U.K. you have to get specific permission for specific research from a specific government organization, the Human Fertilisation & Embryology Authority (link: http://www.hfea.gov.uk/). Now, in the U.S., you do not have a similar regulation, as far as I’m aware.

PS: It was Darwin’s 200th birthday last month. As a scientist and a man of God, how do you think Darwin might view the current debate over evolution?

JP: I think he would not be pleased with certain aspects of it. He actually said that he could not see any reason why a religious person could not believe in evolution. Back then there was no warfare between the two. After the publication of The Origin of Species, there were a significant number of religious people that welcomed Darwin’s argument.

PS: So, why do you think so many religious people deny evolution today?

JP: Frankly, that’s a puzzle to me. I don’t know why. I believe that they are refusing the truth that science could give them. People have become very assertive—if you don’t agree with me about everything, then you really are terrible. I think that really is not the way to find truth.

PS: What is the most controversial issue for people when it comes to the marriage of science and religion?

JP: I think the most difficult question for people is of evil and suffering in the world. We all tend to think if we’d done creation, we’d have done it better. But science helps us to see that the process of the world is entangled, you can’t tear it apart and keep this and throw away that. It’s a sort of package deal. Science is helpful in relation to thinking about this. The theological way to think about an evolving world is that it is a world where creatures are allowed to make themselves. But this has a necessary cost—it has a shadow side. For example the engine that has driven the evolution of life is genetic mutation. If germ cells are allowed to mutate, then it’s inevitable also that body cells are able to mutate. And sometimes if they do that there will be malignancy. It’s an obvious, anguishing fact that there is cancer in the world. But it’s a necessary cost of a world where creatures make themselves.

A Few Questions For
religion
Science