Baby, We Were Born Not to Run

Don't blame yourself, blame your genes! Scientists find you can indeed be a born couch potato 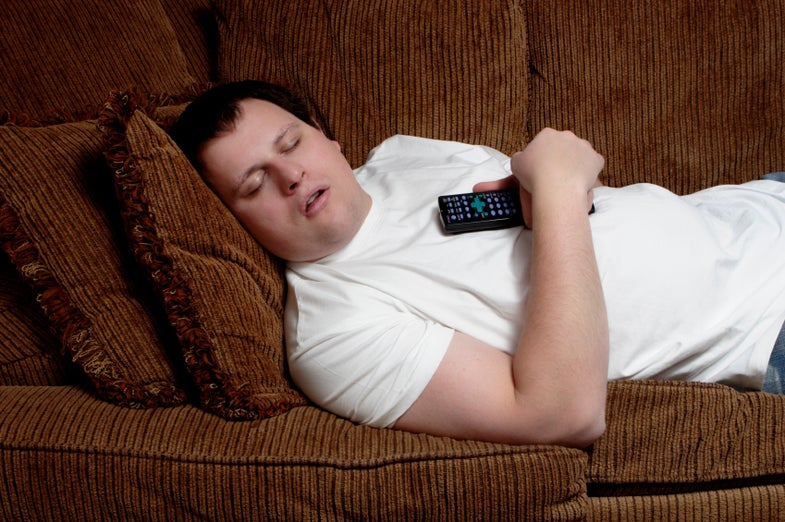 A young man sleeps on a couch, with a TV remote control firmly gripped in his hands.
SHARE

Rather watch TV than bike 50 miles? The thought of a hike sound like torture instead of fun? Well, according to two recent research papers you can stop berating yourself for being a couch potato (maybe). Researchers have identified 23 gene locations that control the activity levels of mice. “Can you be born a couch potato? In exercise physiology, we didn’t used to think so, but now I would say most definitely you can,” says J. Timothy Lightfoot, lead researcher on the project at the University of North Carolina.

To find out what genes controlled high activity levels, Lightfoot and his colleagues bred a super-active strain of mice with a super-sedentary strain of mice. Then, after measuring speed, endurance, and distance for the mice on a hamster wheel, they were able to correlate the mouse behavior with genetic information, identifying 23 genes involved in activity during two studies. The findings are contrary to what Lightfoot originally thought caused the difference between the marathon and couch potato mice. In previous experiments he tried to show that genetic differences in muscle performance were led to lazier mice, but he was unable to find a gene that differentiated muscle performance. That’s what led him to believe its all happening in their furry little heads.

“More and more what we are seeing is differences in brain chemistry. We are really convinced now that the difference is in the brain. There is a drive to be more active.” And, we are guessing, there’s a drive to watch Battlestar Galactica in front of a big plate of nachos.