A trio of prismatic drops (left to right: water, ethylene glycol and ethanol) balances on a new ultra-repellent surface invented by scientists at the University of Wisconsin–Madison. The surface, made up of silicon spikes just 400 nanometers wide, physically repels a wide variety of liquids, including water, oil, solvents and detergents.

Previously, scientists relied on chemical modification to make surfaces repel liquids, a time-consuming process. In the end, each coating worked to repel only certain liquids, and oil-repellent surfaces simply weren’t possible to manufacture. 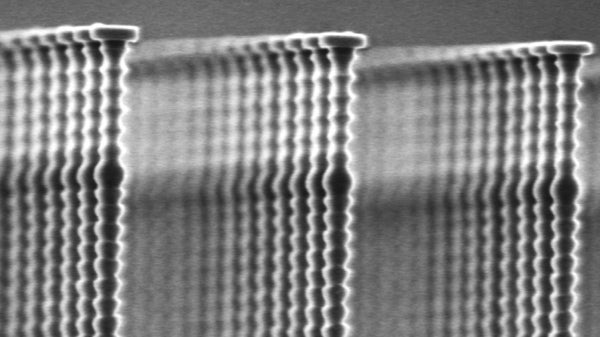 The heads of the nanonails support the liquid droplets

The new surface blocks almost all liquids. Researchers can also turn off the physical barrier: An electric voltage instantly draws liquids down between each spike, where they spread out along the base upon which the spikes sit. This switchable quality makes the surface perfect for controlling liquids in “lab on a chip” chemical reactors, and its super-repellent properties could help keep helicopter blades free of heavy, altitude-robbing water and ice.