Extra Credit: Save the World

Meet Jennifer Daftari’s fifth-grade class at Jay Elementary School in Jay, Oklahoma. They don’t know it yet, but they’re going to save the world.

I got an e-mail not long ago from Ms. Daftari in which she made a compelling (and ego-satisfying) case that her students are PopSci‘s greatest fans. Every month when she announces the arrival of a new issue, she wrote, “they wildly applaud, sitting on the edge of their seats to see what new ideas, technology and inventions their eyes will behold. You and your staff are ‘rock stars’ to my students.” 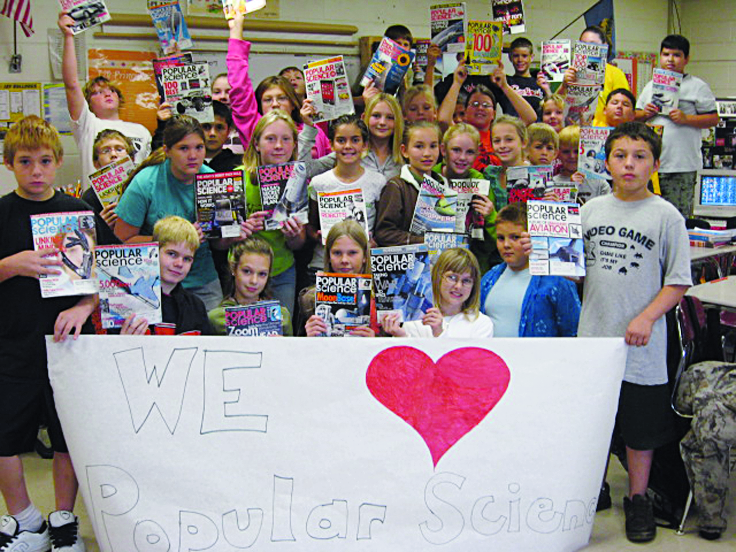 But that’s not why I’m running this sweet photo of the Jay fifth-graders and their cherished copies of PopSci. Nor, strictly speaking, is it because Ms. Daftari told me that if their picture made it into the magazine, I would “touch their lives forever.” No, I’m printing it out of pure self-interest. I expect something in return.

In this issue of Popular Science, Ms. Daftari’s kids will learn of a new movement in medicine that seeks not to eradicate germs, but to cultivate them—to seed our bodies with carefully engineered bacteria that could end tooth decay, elevate our moods, maybe even cure cancer. They’ll also marvel at a vision of the near future in which cord-free appliances are powered by electricity plucked from the air. But the thing I’d like them to focus on is the urgent effort by the airline industry to slash greenhouse-gas emissions—to find a way to fly green.

This is no idle pursuit. Airlines are one of the fastest-growing carbon polluters around; air traffic could double by 2025. And as Dennis Gaffney details in “Fly the Eco-Friendly Skies“, it’s a tremendously complicated problem to solve. Any alternative biofuel needs to pack the same energy punch as today’s jet fuel, needs to be able to be made in abundance, and needs to not freeze at high altitude. Says James Hileman, a research engineer at the Massachusetts Institute of Technology, “If you’re a kid and you’re thinking, ‘OK, what can I do to save the world?’ Well, the one way you can save the world is to find new, growable sources of fuel.”

To me, these kids don’t look like the type to back down from a challenge. Now imagine all the other classes taught by all the other Ms. Daftaris out there. I think they can do it.