Korean scientists solve one of the universe's most pressing problems: how to safely package pickled cabbage for galactic travel 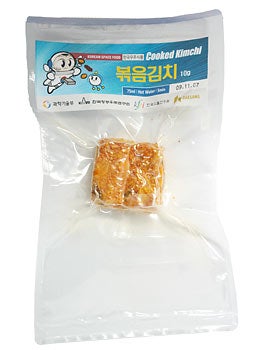 If you have ever eaten in a Korean restaurant, you are undoubtedly familiar with the Korean pre-meal equivalent of bread sticks: kimchi. It’s pickled cabbage and radish, it’s delicious, and it’s everywhere in Korean cuisine. So it would stand to reason that when the very first Korean astronaut blasts off to the International Space Station on a Russian-made rocket this April, his country’s scientists would send him off with space-ready kimchi.

Kimchi is made through the process of fermentation. First, the vegetables are salted. The salt inhibits the the veggies’ ability to absorb water, which makes them crunchier and creates a brine in which the fermentation takes place. Next, spices are added—chili pepper, garlic, etc. Then the mix is left to ferment. The salty water creates a pH environment that’s friendly to bacteria that help human digestion. That bacteria feeds on the sugars in the cabbage and releases lactic acid as a by-product. The benefits are then two-fold: the removal of sugars from the cabbage eliminates an appealing food source for destructive microorganisms while the lactic acid creates inhospitible conditions for anything but the “good” bacteria. Plus, the latic acid makes it taste deliciously sour.

The problem with taking traditional kimchi into space is the presence of all those bacteria. While they may be “good” on Earth, they’re likely to cause trouble in the harsh environment of low-Earth orbit. Cosmic rays could cause them to mutate. The extreme temperature fluctuations could cause early spoilage. The fermentation process could unexpectedly go into overdrive and bubble out of control.

The solution Korean scientists discovered is a way to destroy the bacteria with radiation while retaining 90 percent of the taste and packaging it in a vacuum-sealed pouch. An added benefit of their technique is that the typical pungent odor of the kimchi is reduced by one-third to half, which they hope will make the other astronauts “comfortable trying our space kimchi.” Here’s hoping that once the Russians return to Earth, they’ll be ready for the real thing.