Tsunami in a Tank 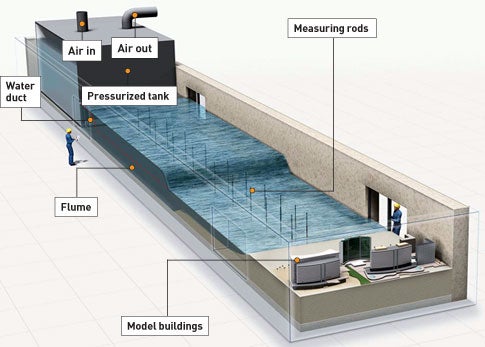 Three years after a series of tsunamis killed more than 200,000 people and devastated hundreds of communities bordering the Indian Ocean, a team of engineers has figured out how to re-create smaller versions of the killer waves in a lab. Their first-of-its-kind flume, set for completion next year, could better reveal how tsunamis work and help in designing buildings that can withstand their power.

After traveling undetected for thousands of miles, the ocean’s most dangerous waves rear up as high as 100 feet as they approach the shore. This initial rush can pummel homes and break protective barriers, but the rest of the wave–the mile-long mass of water that follows the crest to shore and then drags land and buildings back into the ocean–can be just as devastating.

Geoengineer Tiziana Rossetto of University College London first documented this effect while observing the aftermath of the 2004 Indian Ocean tsunami. The waves, she explains, swept away a huge volume of sand and soil as they receded, and the erosion left buildings unstable. “It’s like pulling the roots out of a plant,” she says. To design tsunami-resistant structures, Rossetto realized, she needed to know more about the waves’ action on land, but other than some grainy video footage and a few satellite images, very little hard data exists.

So she recruited the coastal-engineering specialists at HR Wallingford in Oxfordshire to build a wave tank, complete with a miniaturized shore and buildings, all built on a one-hundredth scale, that records a wave’s height, speed, flow and force. â€Nobody’s going to stop a tsunami,â€ says HR Wallingford engineer William Allsop. But giving scientists a way to measure a tsunami’s destructive forces could help at-risk countries prepare for the worst–future versions of the tank shown here will feature a customizable seafloor to simulate tsunamis on specific shorelines.