In the fight against cancer, atomic physicists call in the big guns 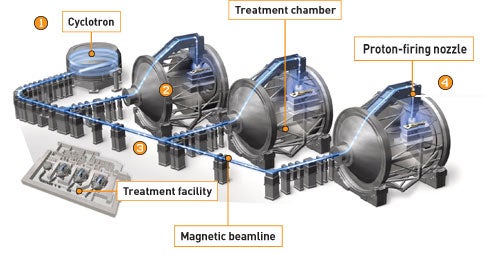 Now physicists at CERN, the European particle-physics center in Switzerland, have begun experimenting with antimatter made of rare, negatively charged twins of protons, and the results are promising. In studies involving hamster tissue, antimatter therapy has even proved to be four times as powerful as protons.

X-rays, which deliver conventional radiation therapy, burn through the body, increasing the cancer risk in healthy tissue. Protons and antimatter, by comparison, can be tuned to release most of their energy right at the tumor site, thus damaging fewer of the surrounding cells. “I didn’t experience any nausea or radiation burn,” says Florida state congressman Stan Jordan, who received proton therapy for advanced prostate cancer earlier this year at the University of Florida Proton Therapy Institute in Jacksonville. Jordan, who likened the treatment chamber to the Starship Enterprise, says the actual “beam-me-up-Scotty” part of the therapy lasted less than two minutes.

Unfortunately, each facility costs more than $100 million, so there are just five in the U.S., limiting treatment to only the toughest cases. But plans for two more facilities are under way.