Consumer videogame technology inspires the U.S. Army's new recruit-friendly training tool. Then it bounces back to the consumer market and to an Xbox near you. 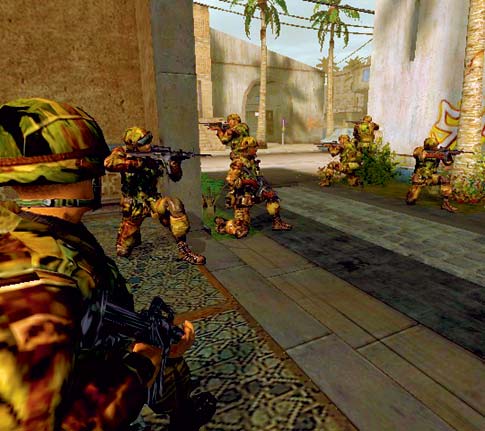 SIMULATOR: As a squad leader in FSW, players guide soldiers through a variety of tense urban combat situations.

Full Spectrum Warrior, a new videogame for the Xbox, feels real. The setting is the fictional locale of Zafarra, Zekistan, but it may as well be Baghdad, Iraq. You command two four-soldier infantry squads and are charged with securing neighborhoods and rescuing wounded comrades. Your men dash across dusty streets, slink along chipped walls, and launch grenades from behind overturned cars. Bullets fly. Bodies fall like rag dolls.

The game feels realistic because it is. Developed as a training tool for the U.S. Army and modified for commercial release this summer, FSW rewards players who follow by-the-book tactics for flanking, taking cover, laying down suppression fire, and more. “We spend a lot of time and money training colonels and generals, but we’ve never had anything good like this for squad leaders,” says Michael Macedonia, the Army’s chief technology officer for training and simulation. The commercial version of the game promises to be a hit as well–FSW won the Critic’s Choice award at E3, the videogame industry’s key trade show, and most critics count it among the year’s very best games.

Through a partnership that perfectly illustrates the modern entwinement of military and consumer technology, in 1999 the Army established the Institute for Creative Technologies (ICT) at the University of Southern California. A research lab of computer scientists, television producers, videogame designers and filmmakers, the ICT’s charter was to find engaging new ways to instruct young soldiers. In 2000 the lab enlisted Pandemic Studios, a private videogame developer, to create what would become FSW.

Project leader Wil Stahl met with generals, captains and sergeants. They knew that a videogame could never teach a soldier to shoot, but they hoped that one could offer tactical instruction and simulate, however faintly, the stress of making decisions under fire. For Pandemic it was a chance, backed by $45 million of the military’s money, to develop a novel game that combined God’s-eye strategy with first-person-shooter action, two approaches that the videogame industry typically considers mutually exclusive.

Pandemic went on to create a trainer with graphics and action that were as good as those for any game on the consumer market, along with artificial intelligence for nonplayer characters and tactical accuracy that were even better. The military version of FSW was tested last year by soldiers at Fort Benning, Georgia. The consumer version was released in late spring. They look virtually identical but don’t play the same; the differences are what distinguish war trainer from war toy. In the home version, guide your squads correctly and you’ll always be rewarded. In the Army game, even good moves are occasionally punished. The lesson is that cruel, capricious fate is an inherent part of war.

The intersection of gaming and reality is what’s most interesting about FSW. Stahl says that during development, Army commanders “became very interested in how you could issue commands with a finite interface.” They were envisioning not only the future game but a future war, with “soldiers wearing display monocles and head-mounted cameras,” Stahl says. “Their squad leader, safe in a tank, sees what they see, and directs their actions with an Xbox-like controller.” Pandemic and ICT, it seems, had helped to advance not only videogames that imitate war, but the idea that war might someday imitate videogames.