The new film's science is even more confused than the plot. 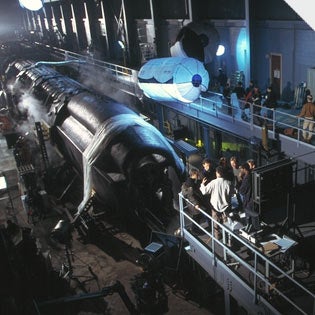 In “The Core,” geophysicists discover that the Earth’s geomagnetic field has entered a dangerous decline.Above: a behind-the-scenes look at the construction of the inner space craft known as Virgil, which is used to carry “terranauts” deep in to the Earth’s interior.

One hundred forty years after Jules Verne imagined a Journey to the Center of the Earth, Paramount Pictures is putting it on screen: The Core hits theaters March 28. This time around, a crack team of scientists and “terranauts” travels to Earth’s core to — what else? — save the world from pending annihilation. Seems as if the core will soon stop spinning, an event that will destroy Earth’s magnetic field, kill everyone who has a pacemaker, and create catastrophic “superstorms” sure to decimate the planet. The solution: Jump-start the core with nuclear bombs. If you’re skeptical, just imagine how two of the nation’s top geophysicists feel. We caught up with David Stevenson of the California Institute of Technology and Gary Glatzmaier of the University of California, Santa Cruz, to get their take.

David Stevenson No. It’s silly to say that the core sto_PS_ rotating, although it does slow down and change direction quite frequently from a geologic point of view.

PS If it did, would Earth’s magnetic field vanish?

Gary Glatzmaier Their reasoning is almost completely backward. The inner core rotates because there is a magnetic field, not the other way around. If [the magnetic field] somehow did decay away — the one on Mars, for example, no longer exists — it would take several thousand years [for the core to stop spinning].

PS In the movie, unshielded cosmic radiation kills people and the Northern Lights appear farther south than ever before. Could this happen?

DS Penetration by the sun’s cosmic rays would be greater, and you might get some increase in cancer rates, but it wouldn’t be like standing 10 miles from Hiroshima.

GG Most cosmic radiation is actually shielded by Earth’s atmosphere; the radiation you’d experience with and without a magnetic field is similar to what you’d encounter at sea level compared to a mountain top. But they’re probably right about the Northern Lights — charged particles from the sun would no longer be diverted to the poles and would produce auroras farther south.

PS How about tunneling to the core and jump-starting it with a nuclear device?

DS That trip would require a staggering amount of energy — more than you could enclose in a craft of reasonable size.

GG People can’t even produce the pressures and temperatures that exist at the core in a laboratory. That means any material we come up with would be crushed. And the amount of energy
required to accelerate the core is magnitudes larger than any nuclear weapon could provide.

PS Could a scientist enjoy the movie?

GG The movie takes a lot of liberty with a little physics. Yet it might inspire people to study Earth science, and that would be a good thing.