Why Does Hair Turn Gray?

Why does hair turn gray? The matter is an issue of genetics and aging. 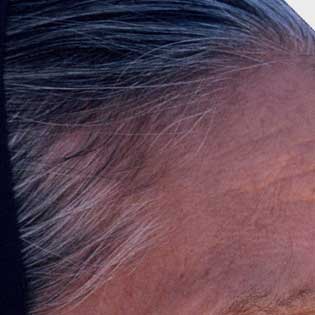 Why does hair turn gray?

For parents, unruly children are the obvious cause of gray hair. To scientists, the situation is more complex. As D.J. Tobin, who heads a team that studies dermopathology at the University of Bradford in England, points out, the matter is an issue of genetics and aging.

Melanin, a chemical produced by specialized cells within each hair follicle, is responsible for giving hair color. Different types of melanin are responsible for different types of hair color-eumalinin for brown or black hair and pheomelanin for yellow or red hair. The type of melanin an individual has is controlled by pigment cells that are, in turn, determined by genes. As we age, the pigment cells at the base of our hair follicles stop producing melanin; without the chemical, our hair turns white.

The body has no central source for melanin, such as a gland; the chemical is produced for each strand of hair: This is why hairs tend to go gray individually.

Researchers have yet to come up with a definitive reason why our hair follicles stop producing melanin. Tobin has found that gray hair follicles still contain melanin’s building blocks, melanocytes and melanosomes, though not melanin itself.

It has been suggested that over time, free radicals damage these pigment-producing cells. Free radicals, which are produced by various metabolic processes within our body (including melanin production), can cause DNA damage. Tobin dismisses this argument, though, claiming that the melanin-producing cells have well-developed methods of purging themselves of free radicals.

According to Tobin, there is no strong evidence that you can do anything to retard the onset of gray hair. The process generally takes place over many years, though an extremely rare disease called telogen effluvium gives the appearance of going gray overnight. Sir Thomas More and Marie Antoinette were both afflicted by this condition. The disease causes all of a person’s pigmented hair to fall out, leaving only gray hairs in place.

Though the onset of gray hair differs greatly from individual to individual, it generally happens at around age 30 in males and age 35 in females.

Research suggests that we may be able to reverse the graying process in the future. Tobin’s group, for instance, has determined that the dormant melanocytes and melanosomes in gray hair follicles can be coaxed into creating melanin again, but it will likely be a while before we see any products in the hair salon. Meanwhile, we’ll have to console ourselves with the thought that many people find salt-and-pepper hair distinguished.