Sharks, manatees, and gators don’t need an evacuation order to know when a storm might be trouble. 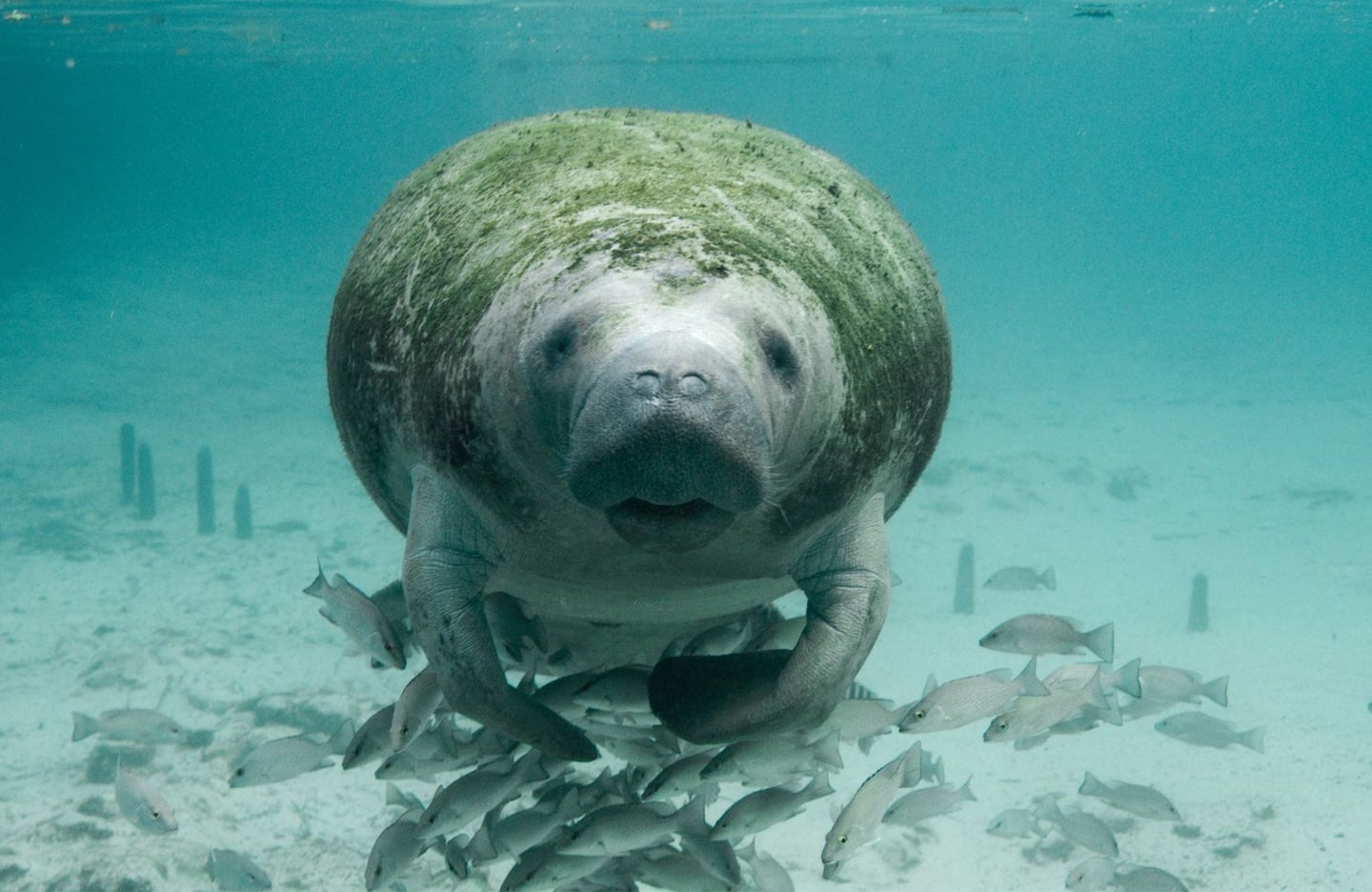 Even though manatees know what to do in a hurricane, their curiosity can get them in trouble. Keith Ramos, USFWS
SHARE

Weeks before we even think about getting sandbags or boarding up windows to prevent hurricane damage, an underwater evacuation begins. Sharks, sea snakes, and other wildlife will make preparations to escape becoming trapped or hurt as massive storms approach a coast.

Much of Florida’s aquatic life—including species as diverse as manatees and alligators—know what to do in a storm like Hurricane Ian. After all, these native animals have had millions more years of practice than us. But those age-old skills will only become more useful as hurricanes become more intense from climate change.

“Aquatic animals respond to storms for the same reason we do—to avoid injury, death, and the destruction from hurricanes,” says Bradley Strickland, a postdoctoral researcher who studies aquatic animal response to hurricanes and climate change at William and Mary’s Virginia Institute of Marine Science. Still, some animals are better equipped to weather or evade the storms than others. And sharks are among the best.

Even when a hurricane is far on the horizon, the atmosphere changes: the barometric pressure drops. “From two weeks out of a hurricane, sharks can actually detect the change and start heading for deeper water,” says Neil Hammerschlag, director of the shark research and conservation program at the University of Miami. The air around Hurricane Ian has gradually been decreasing in pressure as the storm strengthens, and sharks can sense that, allowing them to flee long before Florida’s human residents were given mandatory evacuation orders.

“Similar to the way we use meteorological technologies and observations about the changing wind and temperature before a storm, aquatic animals have ways to sense the approach of a storm,” Strickland says. Sharks use their sensitive inner ears to detect a gathering storm’s pressure changes, he adds. And, because of their incredible swimming abilities (some can swim up to 45 miles per hour), they can quickly escape oncoming storms—that is, if they choose to.

Smaller shark species and juveniles opt to escape to deeper water to avoid the turbulence near the shore. For them, “staying in shallow water would be like a shark tornado,” Hammerschlag says, because hurricanes can push currents up to 300 feet below the ocean’s surface. For smaller sharks that remain in the shallows, they risk being swept inland.

Yet other larger predators, like tiger sharks that grow up to 14 feet and 1,400 pounds, view hurricanes as an opportunity for the ultimate sea smorgasbord. By tracking tiger sharks during and after Hurricane Irma, Hammerschlag noticed that “not only did they not run away, but they may have been taking advantage of the things that were dying, either birds that got washed into the water or fish and invertebrates that collided with debris.” After the storm, he adds, there were “higher numbers of tiger sharks in the area for about two weeks.”

For aquatic and semi-aquatic animals that can’t ride out the storm or swim beyond its reach, finding shelter may be the superior option for survival. “Sea snakes will seek refuge in volcanic rocks to avoid typhoons,” Strickland says. “Alligators likely hunker down to weather a storm by finding easy to get in and out of places,” he adds. Some smaller gators may get swept away by hurricanes; others might change their foraging patterns altogether to stay safe.

Other species may be less lucky. The graceful manatee, for example, has been found in particularly sticky situations post-hurricane. Although weight-wise they are comparable to a tiger shark, speed-wise they are definitely not, cruising up to 15 mph only if they really push it. And try as they might to hunker down before a storm, this doesn’t always work out for them. Instead, they may get swept out of coastal waters by floods. Others, curious to explore new streams, have been found stuck in smaller ponds, forests, or even by roads after post-storm swims through flooded areas. Yet hurricanes rank low on the dangers to manatees, a threatened keystone species in Florida often imperiled by watercraft.

Even if Hurricane Ian is the first big tempest that a Floridian animal will experience, the odds are good it will take some kind of action. “We see animals evacuating the places they call home in advance of a major storm despite, in some cases, having never experienced a hurricane within their lifetime,” Strickland says. “This shows just how innate it is to protect yourself from a storm by preparing or fleeing compared to just waiting it out.”