Countries like Kazakhstan and Vietnam are taking a swing at imaging Earth. 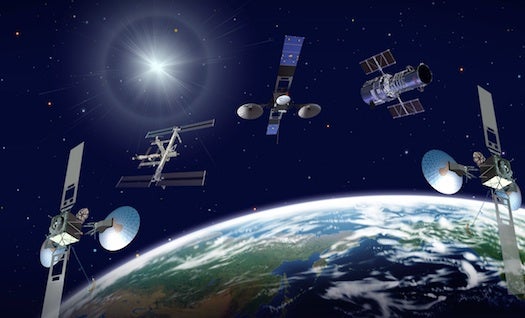 Is it just me, or is it getting crowded in here?

More than 280 new observational satellites are expected to enter orbit around Earth over the next decade, Aviation Week reported from an analysis by Paris-based Euroconsult. About 30 percent of those spacecraft are expected to come from countries with developing space programs, such as Kazakhstan and Vietnam.

The satellites will provide their home countries with images for crop monitoring, weather forecasting, military observation, urban planning and everything else that developed programs already use satellites for. They’ll also provide competition for companies that sell their satellite images to groups that don’t have their own satellites. Governments and other groups spent $1.4 billion to buy satellite images in 2011. By 2021, Euroconsult expects the satellite-image industry to generate $4 billion in revenue.

Satellites in the works at developing space programs around the world include:

Gokturk-1, a Turkish satellite that will be able to take images at a 50-centimeter (20-inch) resolution in black and white. “Gokturk-1 is the most impressive example of a satellite with real capabilities that are not so far from the leading technologies of the top five nations in space,” Philippe Campenon, deputy director for space and Earth observation at Euroconsult, told Aviation Week.

Two satellites from Kazakhstan, with resolutions of 1 and 7 meters. The former is set for a mid-2014 launch.

Four satellites from Vietnam. VNREDSat-1A, which has a 2.5-meter resolution in black and white, is supposed to go up in space this April.

Taiwan’s Formosat-5, which has a 2-meter resolution in black and white. It’s slated for a 2015 launch.

Kompsat-3, a South Korean satellite with a 55-centimeter resolution in color that’s slated for launch in September.