ESA’s Mars Express took this high-resolution view of Charitum Montes, seen here in natural color. Centered around 53°S and 334°E, the image has a ground resolution of about 20 meters per pixel. The heavily cratered region in this image is at the edge of the almost 1,000-kilometer-long mountain range, which itself wraps around the boundary of the Argyre impact basin, the second largest on Mars. .

The high-resolution image above shows a region on Mars called Charitum Montes, a mountain range on the planet’s southern hemisphere. The brighter features are covered in seasonal carbon dioxide frost.

ESA’s Mars Express orbiter shot these photos in June, which would have been winter in the southern hemisphere. The terrain here is very old, which you can tell by the filled-in craters. The area also has smaller pedestal craters, where the ejected material forms a plateau in the surrounding area. ESA explains: “The ejecta surrounding pedestal craters form erosion-resistant layers, meaning that the immediate vicinity around the crater erodes more slowly than the surrounding terrain. The resistant ejecta layer is largely untouched, forming the pedestal.” These stand out in three dimensions thanks to the Mars Express stereo camera. 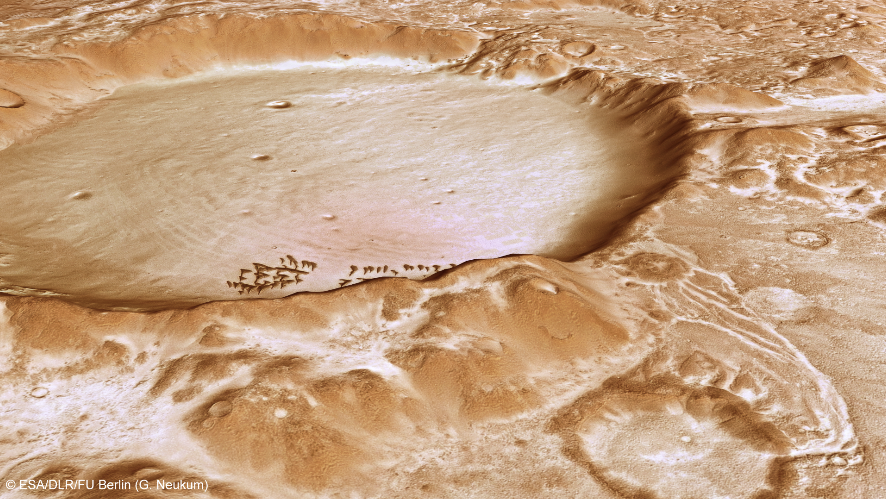 Look at the image above for some further detail. This large crater shows some interesting sedimentary deposits, which appear to have entered the crater through a breach in its northern rim. Several of the other annotated boxes also depict dunes and sedimentary deposits. Planetary geologists are studying these features to determine how they form.

As the Mars rover Curiosity and its predecessors have shown, Mars once had plenty of water flowing across its surface, which is a likely culprit in forming these deposits. 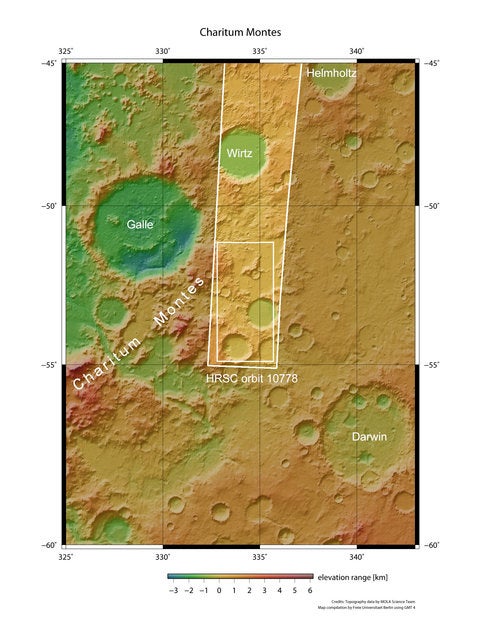 Charitum Montes is a mountain range bounding the southern rim of Mars’ Argyre impact basin. It’s near Galle Crater, not to be confused with Gale Crater. Galle Crater is notable for its prominent smiley face.