Daily Infographic: Who’s Been In The Most James Bond Movies? 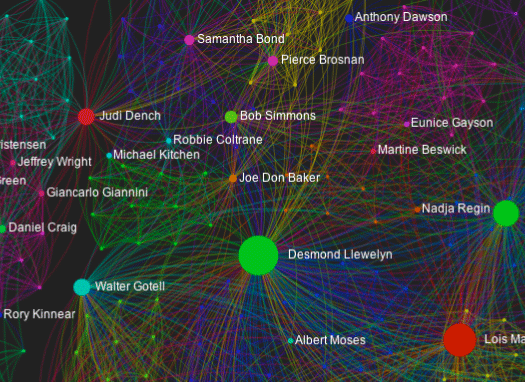 The 50th anniversary of James Bond–and the upcoming release of Skyfall, the newest film–have inspired a wealth of infographics over the last couple weeks, but this interactive visualization by Ramiro Gómez is arguably the coolest.

The graphic shows the connections between 300 actors in 23 Bond films. Each actor is represented by a node on the chart–the larger the node, the more films the actor appeared in– and the connecting lines indicate that actors appeared together in one or more movie.

Desmond Llewelyn, the Welsh actor who played Q for over three decades, holds the record for most Bond films, with 17 appearances between 1963 and 1999.