PASADENA, Calif. — As the Mars rover Curiosity plummeted toward its landing on Mars last night, NASA’s orbiters, the storied... 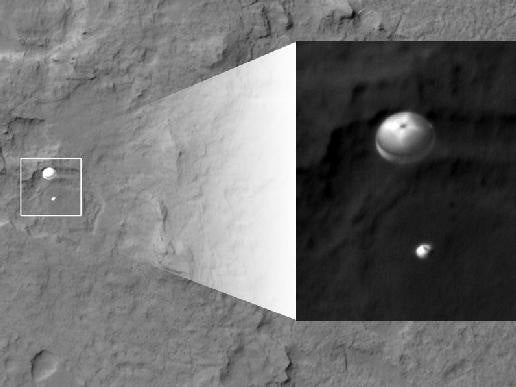 The HiRISE instrument on the Mars Reconnaissance Orbiter snapped this image of the Mars Science Laboratory spacecraft on the chute, sailing toward its perfect landing last night in Gale Crater on Mars. NASA/JPL
SHARE

PASADENA, Calif. — As the Mars rover Curiosity plummeted toward its landing on Mars last night, NASA’s orbiters, the storied Odyssey orbiter and Reconnaissance Orbiter, were sailing overhead and watching its progress. In an incredible feat of photography on another planet, MRO’s HiRISE camera captured this image of the spacecraft on the parachute.

You can see the fully unfurled chute, which was capable of sustaining Mach 2.2 speeds, complete with the small hole at its top. The white area on the spacecraft is the Mars Science Laboratory’s backshell, holding the Curiosity rover tucked inside. NASA managers were unsure as of 10 a.m. Pacific time Monday whether the heat shield is still attached in this image.

Capturing a snapshot of Curiosity’s “seven minutes of terror” is really something — MRO had to be in the right place at the right time, which itself was a feat of orbital mechanics.

Sarah Milkovich of the MRO team told a morning news conference that the orbiter was about 340 kilometers (211 miles) from the falling spacecraft when it took this image. It was almost directly overhead, at a slight angle.