You guys put up shields, right? 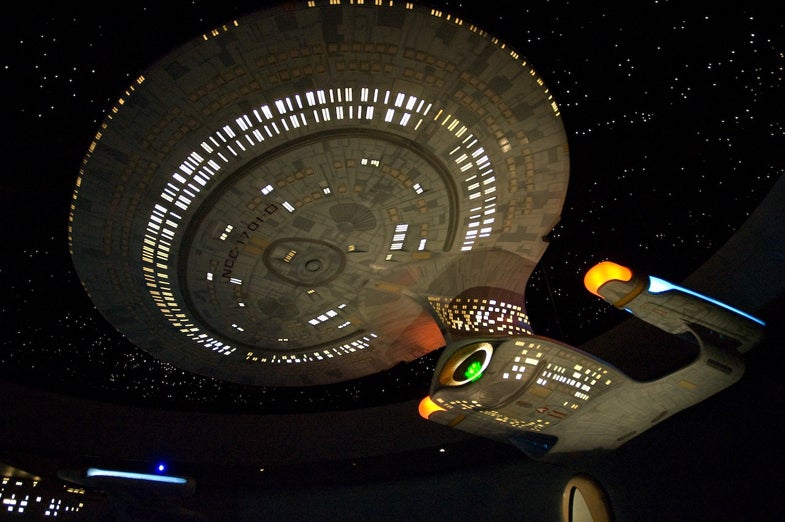 Science fiction writers may have to rethink how their starship crews survive travel near or beyond the speed of light. Even the occasional hydrogen atom floating in the interstellar void would become a lethal radiation beam that would kill human crews in mere seconds and destroy a spacecraft’s electronics, New Scientist reports.

Just a few stray wisps of hydrogen gas — fewer than two hydrogen atoms per cubic centimeter on average — would translate into 7 teraelectron volts for a starship crew traveling at 99.999998 percent of the speed of light. That’s as much fun for humans as standing in front of the proton beam created by the Large Hadron Collider, according to William Edelstein, a physicist at Johns Hopkins University.

Edelstein added that the radiation dose would reach 10,000 sieverts within a second; the fatal radiation dose for humans is just 6 sieverts. He predicted that any extraterrestrials who might have created starships capable of such high speeds might have died upon their inaugural voyages, and New Scientist adds a preliminary funeral note for Kirk, Spock and the rest of Star Trek’s USS Enterprise crew traveling at warp speeds.

But hold on a second. The warp speed concept of Star Trek supposedly involves manipulating space-time, so that the actual starship travels in a bubble of normal space-time. The USS Enterprise also had deflector shields that could shrug off photon torpedoes, never mind some measly hydrogen atoms.

See, we knew that science fiction could imagineer us out of that pickle. Hopefully some of our early shield technology might translate into the more robust version by the time humans become true interstellar spacefarers.