Drones Took Over A Government Meeting In New Mexico

“We’re going to do a controlled, somewhat safe flight” 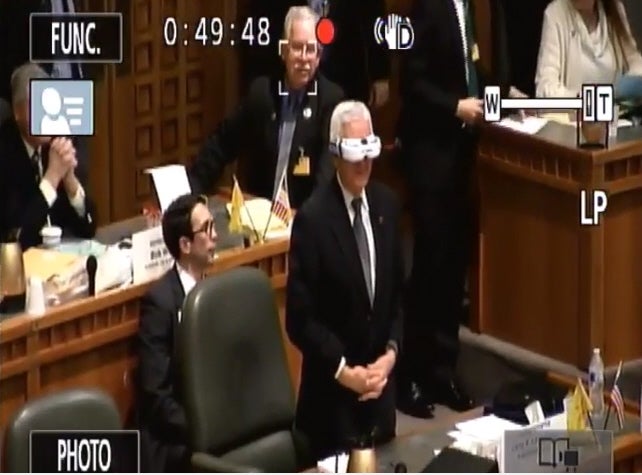 In New Mexico, to encourage state funding of robotics programs, a group recently flew their own quadcopter inside the State Capitol (known as “The Roundhouse”). One lawmaker was even given first-person-vision goggles (FPV) to see what the drone saw.

Aside from being one of many bizarre moments in the Land of Enchantment’s long history of them, the drone flight may be the first time in American history that such a craft has been piloted through a hall of government. Captured by official cameras, the video quality isn’t great — but the flight itself is pretty remarkable

The presentation is in support of House Bill 64, introduced by James E. Smith, a teacher whose district covers a swath of New Mexico’s eastern mountains. Wearing the goggles is Albuquerque Representative Larry A. Larrañaga, whose district includes the the Albuquerque Academy, a distinguished private school.

The bill calls for $400,000 to be spent by the board of regents of Eastern New Mexico University to support robotics programs for youth from third through twelfth grade, culminating in a robotics competition. (New Mexico, as you may recall, is fond of robot competitions.)

Watch the full clip below. It’s cut from the much longer official House video, with robotics starting at right about minute 41 and drones taking off around minute 48.