Here are some of the best ways to save money on games and gaming gear for Black Friday. 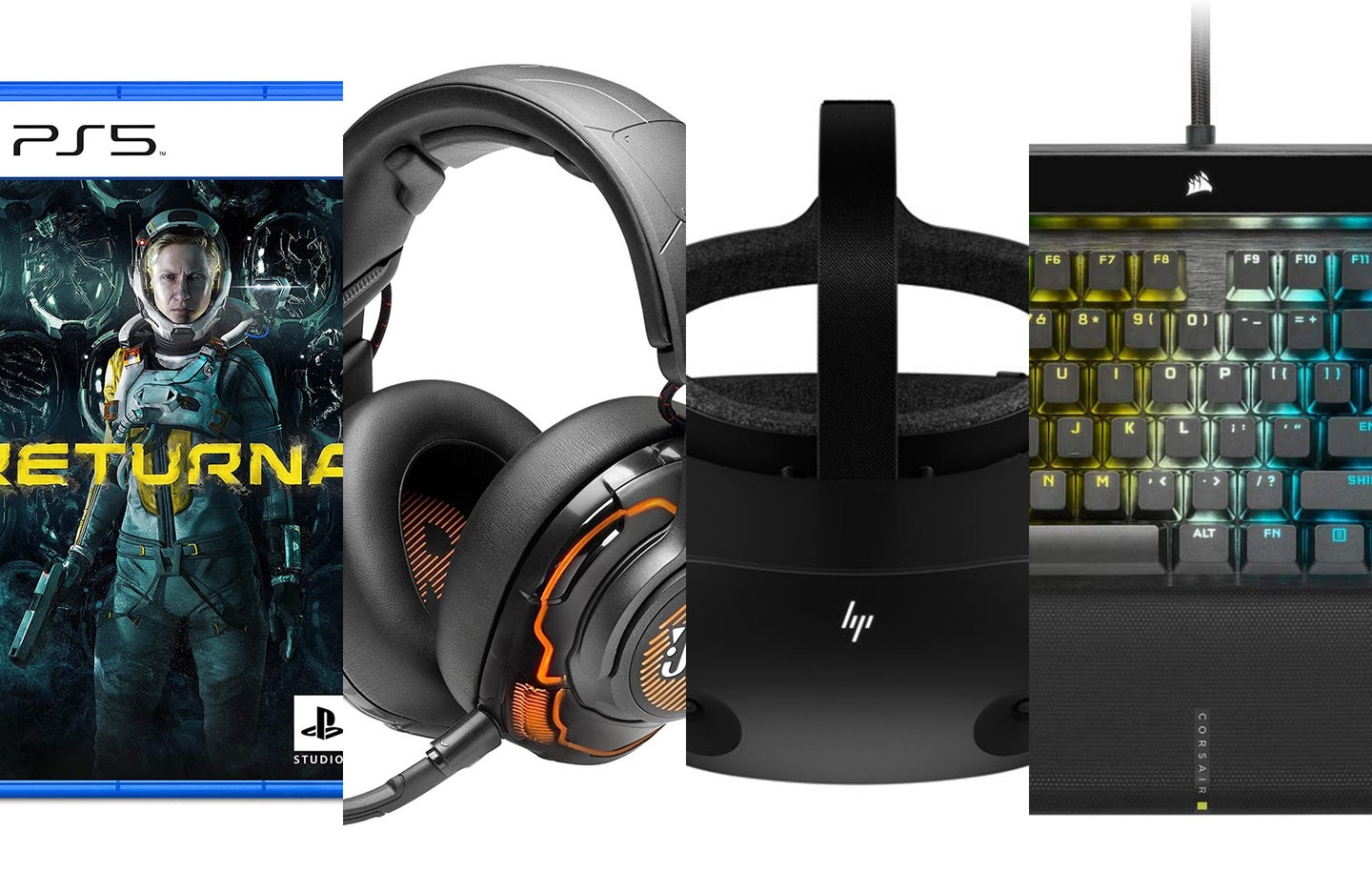 Ring the alarm! Today’s Black Friday! There have already been deals across the web with huge discounts on all kinds of video gaming-related stuff, from new(ish) games, to controllers and headsets, to gaming PCs and monitors. There are so many, in fact, that we now need to comb through them and figure out which ones are actually worth buying. Remember: A big sale and a good deal aren’t always the same thing. A crappy controller that’s 90 percent off is still a crappy controller.

We’re highlighting the best Black Friday and, eventually Cyber Monday deals on games and gaming gear. The PopSci commerce team will keep this post updated throughout the weekend as the discounts come and go this holiday season. As always, I’ve also put together a few tips to help you figure out how to parse the good deals from the bad on your own, so you aren’t out there shopping all alone in the digital wilderness.

There are tons of great Black Friday deals on video games this year. Many of the 2020 and 2021’s biggest hits are down to $30 or $40. Marvel’s Guardians of the Galaxy is the newest big-budget game I’ve seen with a major price cut. It doesn’t hurt that Guardians was the arguably the surprise hit of the Fall video game season, impressing critics with a captivating story that feels similar to the MCU, but has a charm all its own.

The link at the top of this story is for the Xbox version, but Marvel’s Guardians of the Galaxy is also available on PlayStation 4 and PlayStation 5 consoles for $29.99.

The Logitech G502 Lightspeed is one of my favorite wireless gaming mice. It’s comfortable, has tons of customizable buttons, and has an amazing wireless charging setup if you pair with Logitech’s Powerplay mouse pad. My only qualm has always been that, at $150, it’s very expensive. At a much more reasonable $99, this is one of the best PC gaming upgrades you can make.

If you love the big gaming keyboards with tons of features and smothered in RGB, Corsair’s flagship K100 RGB opto-mechanical keyboard is an incredible pick. It has every feature a PC gamer could want, including USB passthrough, dedicated media keys, a volume roller, and customizable RGB lighting. It’s a perennial upgrade pick, but you can get it for a good price right now.

The JBL Quantum One is a truly gaming decadent headset for PC players. It’s comfortable, has special features like 3D audio and head-tracking. It even has customizable RGB lighting. These features push the Quantum One’s price to a sky-high $300, but anything’s possible on Black Friday, so now it costs only $149.99, putting it in the same price range as most mid-high tier headsets. For most PC-based headset-owners, this will be a huge upgrade.

Monitors are an especially good thing to shop for around Black Friday, Cyber Monday, and other holidays. They tend to be very pricey, and those prices often get cut when retailers get the proverbial red pen out to slash prices. Samsung has a large slate of monitors on heavy discount this holiday season, the most exciting of which is the Odyssey G9, a beautiful 49-inch curved ultrawide display. The 32:9 screen can output at 5120 x 1440p resolution at a 244Hz refresh rate. Curved ultrawide monitors are something of an acquired taste, they enhance the cinematic quality of games, but can be finicky in some situations. If the idea appeals to you, though, this is a very good option.

The Razer Blade is one of the best lines of thin-and-light gaming laptops around. It is also notoriously hyper-expensive. For Black Friday, Razer’s pulling out all the stops, dropping the price of an older model of the Razer Blade 15 by $900 to get it out the door. While its got an Nvidia 2070, a last-gen graphics card, you’re still getting a lot of performance for the price. Plus, it isn’t every day that we get to call a Razer laptop “relatively affordable.”

If you’re looking to dabble in virtual reality or, better yet, if you’ve tried an Oculus Quest 2 and want to dive down the rabbit hole head-first, the HP Reverb G2 is a passport to the wider world of VR gaming. It’s a powerful, PC-based headset that supports “4K resolution” (2160 x 2160 per eye) and a 90Hz refresh rate, offering a smooth experience. (Assuming you have a powerful gaming rig to run them). The Reverb G2 also grants you access to a wider world of VR content: It supports Microsoft’s VR store by default, but can access the SteamVR and the Oculus PC library as well. It’s an affordable way to make the jump from VR novice to hobbyist in a single step.

These are only a small, prestigious sample of the vast selection of gaming Black Friday deals that are on sale right now. Between these deals and the ones that will appear in the next few weeks, there will be an overwhelming number of offers from every retailer and manufacturer. If you plan to continue pursuing digital storefronts, keep these tips in mind.

If you’re shopping for a console, prepare to work hard

If you perused all the deals in this post, you’ll probably notice a few conspicuous absences — We have lots of leads for console games and accessories, but only a few, fleeting options for the PlayStation 5, Xbox Series X, Xbox Series S, or Nintendo Switch OLED consoles themselves. If you’ve spent any time shopping for the new consoles in the last year, you may know why. Video game consoles are flying off the shelves at record rates in 2021. Not only should you not expect to find them discounted, you’ll be lucky to find them in stock at all.

If a game console is on your shopping list this year, I would strongly urge you to pick a backup gift for your holiday gathering and tell the person you’re shopping for that you hope to buy them one when you can. I have noticed in the last week that retailers have been sending out notices about having consoles in stock, so it is definitely a good time to try getting one. If you’re up for it: I’d recommend requesting alerts for your desired console with all the major retailers — Amazon, Best Buy, GameStop, Target, and Walmart. Also look for newsletters like Matt Swider’s The Shortcut, and social accounts like Wario64 or Cheap Ass Gamer, which highlight availability in real time.

That said, they are all really hot tickets this year, so don’t assume that you will be able to beat the odds.

When shopping games, beware ‘kid in a candy store syndrome‘

Any gamer who’s shopped the Steam Summer Sale or any console store’s holiday sale will tell you, it is very easy to buy too many video games. Most game publishers employ the same set of tricks on Black Friday, dropping the price of their games to somewhere between $20-$40 (Or less for older titles). With tons of games floating around half-off, it can be very easy to talk yourself into buying a bunch of games you don’t really want. While having a backlog of unplayed games feels luxurious, I assure you that you will feel better about your purchases if you stick to buying games you wanted before they were on sale, and spend that other money on peripherals or other gear.

When buying a gaming PC, don’t be swayed too much by discounts

When assessing the value of a gaming PC, you need to consider how long it will reasonably be capable of playing new AAA video games. In general, the more you spend, the more future-proof your machine will be. Black Friday disrupts the simple price-to-longevity equation with deals that create incredible value. However, I would urge PC shoppers to avoid taking a flier on a pre-built gaming rig because of a big sale. Taking $200-$300 off a machine that should cost anywhere from $1000-$5000 is rarely worth it if doing so causes you to buy a machine with compromised specs. If you do, you may find yourself looking for another PC in just 2-3 years.

If you are actually shopping for gifts — No shame if you’re shopping for yourself! I will be too. — do not hesitate when you find something that you want. Between supply chain issues related to shipping, the semiconductor shortage, and general holiday delivery madness, you should consider holiday shopping a high priority if you hope to get your gifts delivered by Christmas. (If you’re looking for gifts to give on the first night of Hanukkah, November 28, online shopping is off the table).