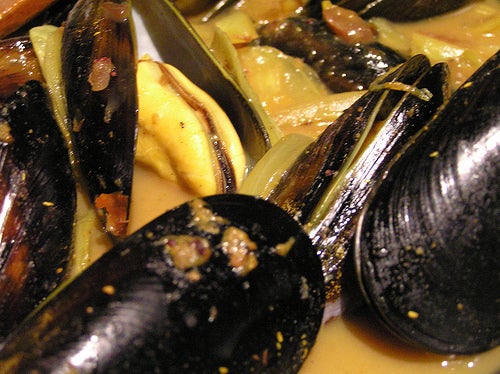 Long before the island of Gibraltar confused modern day tourists (is it Spanish? Is it British?), this rocky outpost just off the southern coast of Spain was home to our Neanderthal ancestors. Day-to-day Gibraltan life 30,000 years ago held essentially no resemblance to life today, except perhaps when it came to taste buds. New findings prove our pre-historic brothers and sisters shared our affinity for seafood. They actively hunted mussels and other mollusks, fish, and even seals and dolphins—and didn’t pay market prices for them either.

Paleontologists from the National Museum of Natural Sciences in Madrid, the Natural History Museum in London, and elsewhere recently led a dig in the Gorham and Vanguard caves on eastern Gibraltar beach, where they found some very stale left-overs. They discovered bones from monk seals and bottlenose dolphins, illegal to serve now, but apparently an epicurean treat for the Neanderthals.

Most of the bones were from young mammals, suggesting that the seafood hunt occurred during breeding season, when the animals came to shore. The scientists say their evidence strongly suggests that Neanderthals made deliberate visits to the coast during this time specifically to hunt seafood. And, while they couldn’t shop at Williams Sonoma, Neanderthal chefs did have their own tools for preparing the day’s catch. Damaged bones show stone tools did the trick when it came to removing the meat, and a hearth found at Vanguard cave was probably used for heating seal and dolphin carcasses, weakening the bones and loosening the marrow so the meat would be easier to separate.

While we can’t know how their ancient fish fry tasted, apparently mussels and fish were worth a trip to the coast then, much as they are today.