Now You Can Pick Your Hospital Like Your Restaurants–On Yelp

With data on wait times, and more 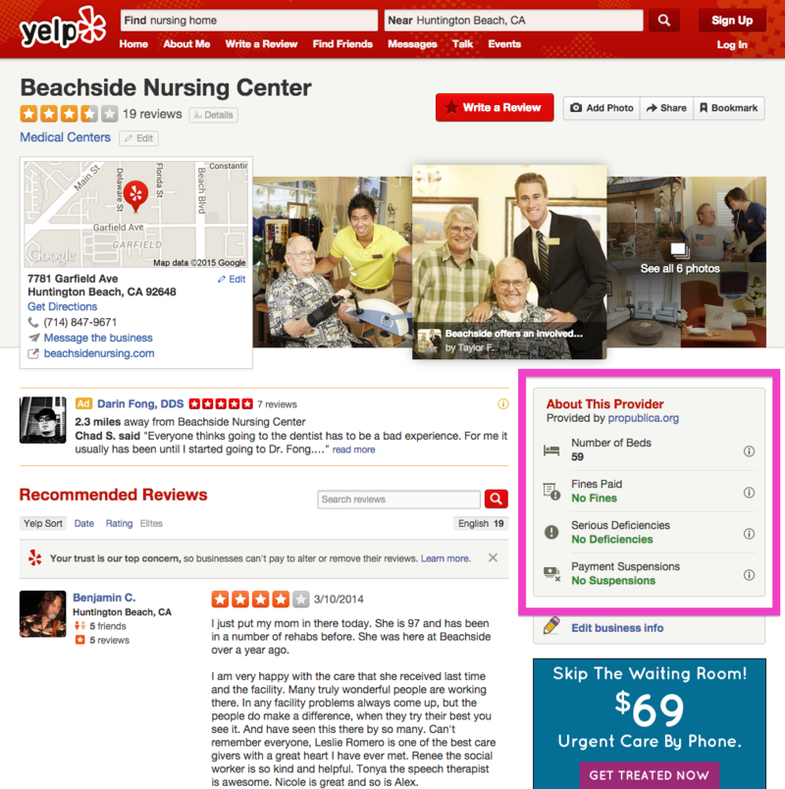 If you love reviewing restaurants on Yelp, health care centers might be the next big thing. They’re about to get decked out with a lot more information thanks to a partnership between Yelp and nonprofit investigative journalism outlet ProPublica, according to a blog posted today on Yelp.

Health care centers like hospitals, nursing homes, and dialysis clinics already make up six percent of the business entries on Yelp. But now the entries for almost 26,000 of them will incorporate information like an emergency room’s average wait time or readmission rates. ProPublica has compiled the information from Medicare’s Hospital Compare web site, but that information is often hard to find or interpret, Yelp executives say.

“We’re taking data that otherwise might live in some government pdf that’s hard to find and we’re putting it in a context where it makes sense for people who may be in the middle of making critical decisions,” Luther Lowe, Yelp’s vice president for policy, told the Washington Post. ProPublica will update the information quarterly.

The primary goal seems to be an altruistic one: to bring patients as much essential healthcare data as possible when they select a facility, which can make the difference between a successful procedure (and a healthy patient), and one that causes the patient more harm. For Yelp, the extra info will drive more traffic; in return, ProPublica will have access to the reviews on Yelp for future stories.

The newly publicized data may make hospitals more accountable, too, and may pay more attention to patient convenience, as ProPublica senior reporter Charles Ornstein indicated in a Tweet.