NASA Says It Will Help SpaceX With Mars 2018 Mission

While cutting funding for its own Mars programs 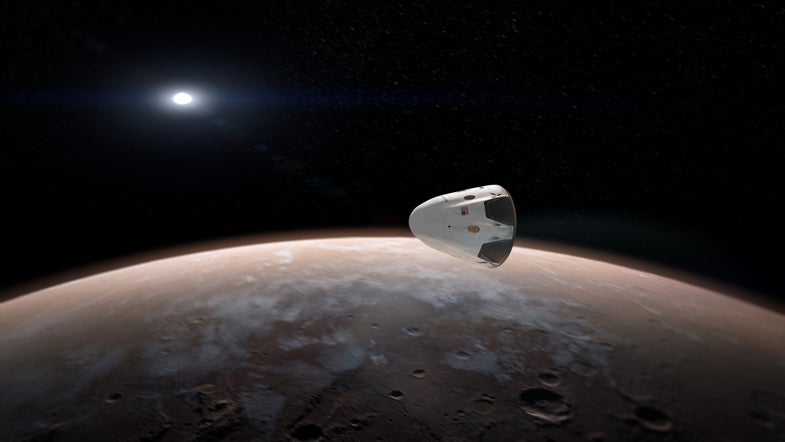 SpaceX just announced it’s hoping to land an uncrewed Dragon capsule on Mars in 2018, which would make it the first private company to land on another planet. But it’s not going alone.

According to a blog post today from NASA Deputy Administrator Dava Newman, NASA has agreed to provide technical support to SpaceX’s mission, in exchange for data about the spacecraft’s entry into the Martian atmosphere, descent, and landing.

Meanwhile, the space agency just cut funding to its own Mars landing research by about 85 percent. The giant inflatable doughnut named the Low Density Supersonic Decelerator was supposed to use parachutes and the friction of Mars’ atmosphere to deliver large payloads to the Martian surface. However, last year’s tests didn’t go so well, and the project was costing NASA about $20 million per year. The agency claims to have cut the program due to budget constraints.

The agency’s agreement with SpaceX, on the other hand, is completely free, based purely on the exchange of information.

Utilizing SpaceX for a landing strategy is a smart move, financially, and the space agency is billing it as a partnership. “[G]one are the days of the ‘space race’ when the dominant theme was that of various nations racing against each other,” writes Newman. “Instead, we’re increasingly running together.”

NASA’s partnerships with private industry have been a stunning success so far, with companies delivering cargo to the International Space Station on the cheap. But one has to wonder what this move means for the rest of NASA’s “Journey to Mars.”

After the Dragon capsule has carried astronauts to International Space Station (slated for 2017) and landed cargo on Mars, will it really make sense to rely on NASA’s relatively untested and fairly expensive Orion capsule and Space Launch System to carry the first human explorers to Mars? The Space Launch System in particular has come under criticism for being expensive, delayed, and in general unrealistic, and many in the industry believe SpaceX could do the job more efficiently.