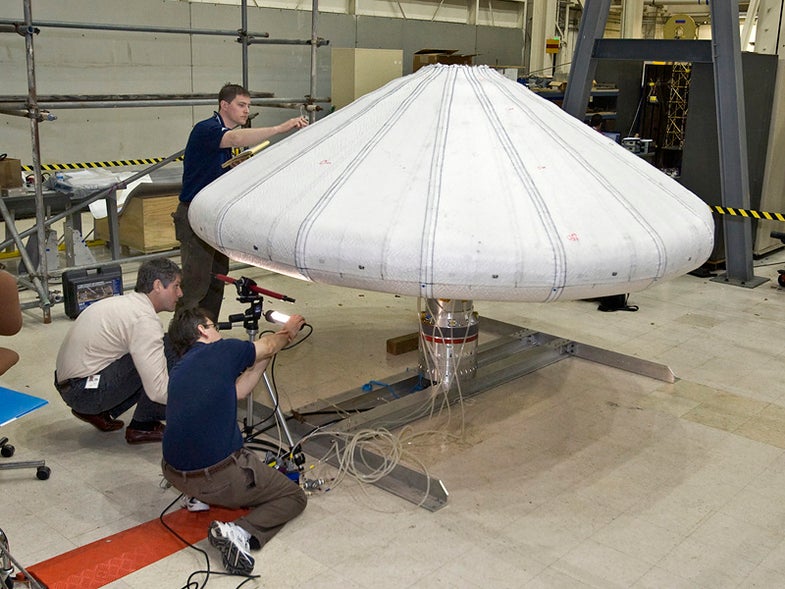 Packing for space missions has always faced weight limitations due to fuel costs. But NASA’s successful test of an inflatable heat shield signals a way forward for future spacecraft to reenter Earth’s atmosphere, and maybe even land heavier loads on Mars.

Packed into a 15-inch shroud payload, the shield launched this morning aboard a small sounding rocket from the space agency’s Wallops Flight Facility off the coast of Virginia. After reaching an altitude of 124 miles, the shield unpacks and inflates itself into a 10-foot diameter mushroom shape of silicone-coated fabric.

The nitrogen inflation of the heat shield took less than 90 seconds, before the aeroshell went into free fall and experienced peak heating and pressure during reentry around 50 miles up. That marks the first successful reentry test of an inflatable vehicle.

“Our inflation system, which is essentially a glorified scuba tank, worked flawlessly and so did the flexible aeroshell,” said Neil Cheatwood, chief scientist for the Hypersonics Project at NASA’s Langley Research Center in Hampton, Va.

Current and past spacecraft such as the Apollo capsules and the Space Shuttle use heat shields made of rigid reinforced carbon and ceramic tiles to safely reenter Earth’s atmosphere. Having an inflatable alternative could both save on size and weight for future space missions.

NASA researchers are even eying the inflatable heat shield’s use for future planetary missions. Landing a bigger payload on Mars would require a larger heat shield to increase drag, which would become more feasible from a weight perspective with a tightly-packed inflatable aeroshell.

The current heat shield demonstrator splashed down into the Atlantic Ocean, where NASA made no plans to recover it. But the valuable on-board telemetry data from the experiment could point engineers toward that future where robot explorers or even humans descend to the red planet in safety thanks to their inflatable airbags.