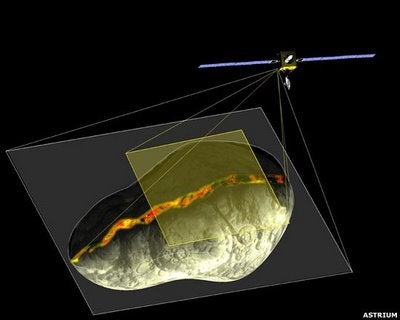 The 11-ton “gravity tractor” would have to launch 15 years before a predicted collision between an asteroid and Earth, according to the BBC. But the company, EADS Astrium, noted that no spacecraft prototype has emerged just yet.

Any defense against asteroids smacking the Earth currently relies upon a loose surveillance network of ground-based telescopes and volunteer observers to keep track of potential dangers. The National Research Council released a report earlier this month on how NASA lacks the funding to meet its goals for detecting nearby space rocks.

Still, it’s good to see someone taking semi-concrete steps to move the asteroid defense debate beyond just talk. EADS Astrium previously dipped its toes into space tourism with a rocketplane concept, and one of its French engineers recently constructed an aerobraking sail to bring down old satellites. After all, there’s plenty of natural junk flying around in space without the manmade cloud of debris surrounding Earth.