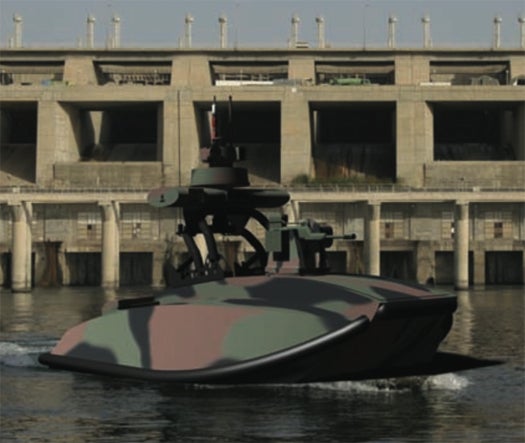 Between scientists warning of autonomous killer robots and a Predator drone killing Osama bin Laden’s son, news about killer robots has been eating up a lot of bandwidth lately. But most of that press has focused on the Air Force’s Predator and Reaper unmanned aerial vehicles (UAVs). Well, the Air Force needs to make some room in the spotlight, because the Navy’s getting in on the act, too.

In an oddly revealing interview, Rear Admiral Mark Kenny, the head of the Navy’s irregular warfare operations, not only stated that the Navy’s submarines have been equipped with unmanned vehicles, but even detailed which vehicles and how they are used.

According to Kenny, four submarines, whose nuclear missiles had already been removed to make room for more conventional weapons and Navy SEAL deployment chambers, are now underway with both aquatic and aerial robots. In particular, Kenny singled out a torpedo-sized robot used for electronic eavesdropping; a small, 45-pound UAV that may one day carry weapons like its larger cousins; and an ultralight 15-pound UAV that relays video and radio traffic back to a command center aboard the sub.

Kenny said that this trend is on the rise, with more subs trading out their nuclear weapons for easily deployed robots. There’s still no word, though, on how many of the subs also have a talking dolphin.