Well, that asteroid's going to leave a mark... 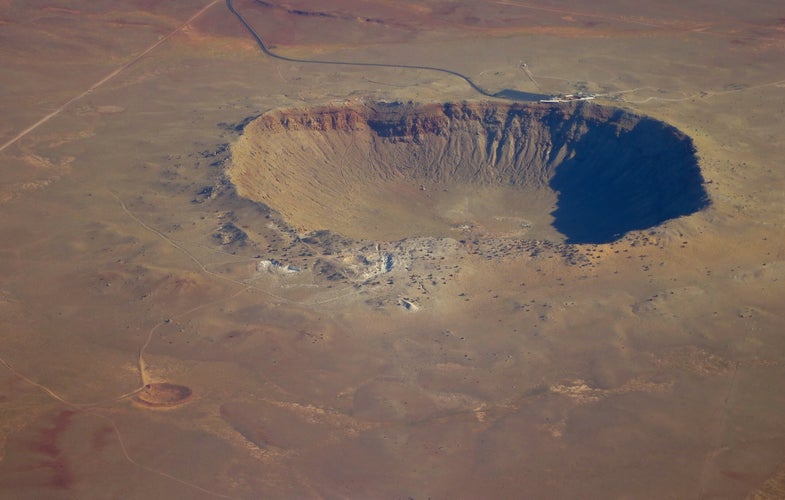 50,000 years ago, a dense chunk of nickel and iron, over 100 feet across, entered the Earth’s atmosphere. It sped towards the surface at 45,000 miles per hour, and slammed into the lush woodlands of North America. The impact left a giant hole in the landscape of what is now Northern Arizona, 590 feet deep and ¾ of a mile across.

Today, we know the site as Meteor Crater, and to really get the scope of the place, we sent Jake Roper to take us on a video tour of this natural wonder. It has fascinated generations of people, but we are still only just beginning to understand asteroids, the phenomenon that excavated this remarkable place. 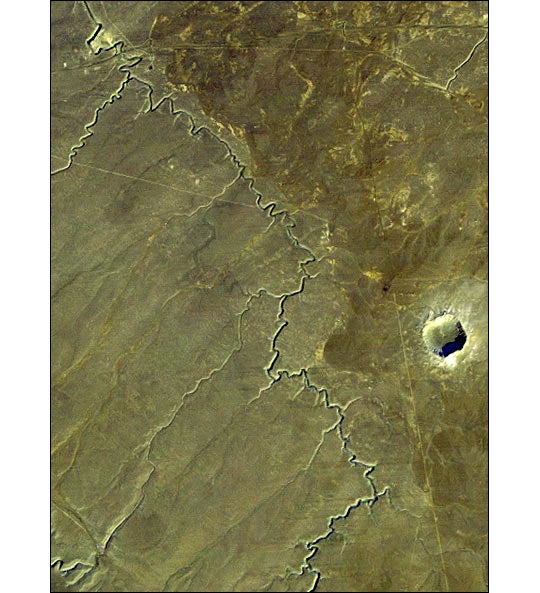 Meteor Crater as seen by the LANDSAT satellite.

In order to understand what happened at Meteor Crater, we have to go back to the start of the Solar System. As the sun was first forming, dust and gases started orbiting the new star. These tiny objects crashed into each other, building up into larger and larger bodies as they went through constant collisions. Many of these became the planets and their moons, but there were some left over, especially in the area between Mars and Jupiter.

There are tens of thousands of these objects in the space between the two planets. Some are icy, some are rocky.

Just to reiterate a quick vocabulary lesson from the video: According to NASA asteroids are small rocky bodies orbiting the sun. Comets are very similar to asteroids, but they tend to be icier, and can leave beautiful trails of vapor in space as they get close to the Sun. Meteors are what we call the fiery streaks across the sky when an asteroid enters the earth’s atmosphere. Meteorites are the remnants of an asteroid that finally make it to the Earth’s surface.

What happens in the main belt tends to stay in the main belt, but occasionally an asteroid will hit another asteroid, or cross through a planet’s gravitational pull in just the right way, and get shot into the inner part of the solar system.

When that happens, the asteroid might move into a new orbit, fall into the sun, or hit another planet like Earth.

“It’s almost like a pinball machine,” says Amy Mainzer, the principal investigator of the NEOWISE program, which maps out near-earth objects (NEO) such as asteroids with the Wide-field Infrared Survey Explorer (WISE) spacecraft.

Until 20 years ago, nobody was really focused on whether or not another Meteor Crater was likely to happen again. When many astronomers considered asteroids, they thought of them as the “vermin of the sky,” says Mainzer–not because they posed a threat, but because they messed up observations of other astronomical objects.

Then, 1994, everything changed. The world watched in awe as fragments of the Shoemaker-Levy comet slammed into Jupiter—the very first time that anyone had observed an asteroid-like object colliding with a planet.

The huge discolored scars visible in the gas giant’s atmosphere were the size of several Earths, and lingered for months. It got people thinking. Before Shoemaker-Levy collided with Jupiter there was only a relatively modest effort to track down near-earth objects capable of doing serious damage to the Earth. But after the entire planet saw Jupiter get hit, interest in asteroids (and asteroid impacts) soared.

And the government threw money at programs like NEOWISE and its predecessors, requiring NASA to find out how many earth-destroying asteroids were out there, and if they would actually destroy the earth.

So, what would actually happen if an asteroid struck the Earth today?

Anatomy of a Strike

Seeing Meteor Crater for the first time can shift anyone’s perspective–including someone who studies asteroids professionally. Mainzer has catalogued many asteroids much larger than the one that created Meteor Crater, but she called the experience of seeing the site for the first time a visceral reaction. “It just goes to show you that it doesn’t take a large asteroid to make a very large hole in the ground,” she says.

But how, exactly, did that hole get made?

“In the 1870s, people had a very incorrect idea of what a large meteor impact was like,” explains Jay Melosh, a geophysicist at Purdue. “They thought it was like firing a bullet into the ground.” When you fire a gun at the ground, the bullet creates a small crater, and the bullet disappears into the ground, buried in the soil. “At the speeds that /[the asteroid is/] moving, the atmosphere is almost like a brick wall,” Melosh says. Smaller asteroids, or asteroids with less metal would break apart and burn up entirely. But even the stronger, denser asteroid was strained by its trip through the atmosphere. When it finally hit the earth, it did create a huge impact crater, but instead of burrowing into the ground like a bullet, it exploded, strewing the landscape with a large debris field.

Those physics were a huge disappointment to Berringer, who hoped to strike it rich by mining his theoretical giant meteorite in the ground for raw metal. He dug deep into the heart of the crater in search of his treasure, not realizing that all that was left of the asteroid were chunks of metal strewn across the landscape.

Even after Barringer died, scientists continued to visit the site. They mapped out those bits of metal, and figure out what really happened. Others, (including Melosh) added to the general knowledge about the site. They calculated the angle of the strike and the speed at which the asteroid was traveling when it eventually hit the Earth.

Melosh also created an interactive website that can show what would happen if different types of meteors hit. Dense, metal-rich asteroids might leave a substantial mark even if they’re on the small side, while larger, icy or rocky bodies might only leave a visual impact, like what happened at Chelyabinsk in Russia a few years ago.

Back in 2013, cameras mounted on Russian dashboards captured a sight that was unusual even by Russian dash cam standards: a giant fireball streaking across the sky.

The meteor exploded before it ever hit the ground, blowing out windows in the city of Chelyabinsk, but not leaving a crater.

Events like Chelyabinsk are far more common than events like Meteor Crater, but in the future we have to be prepared for anything. 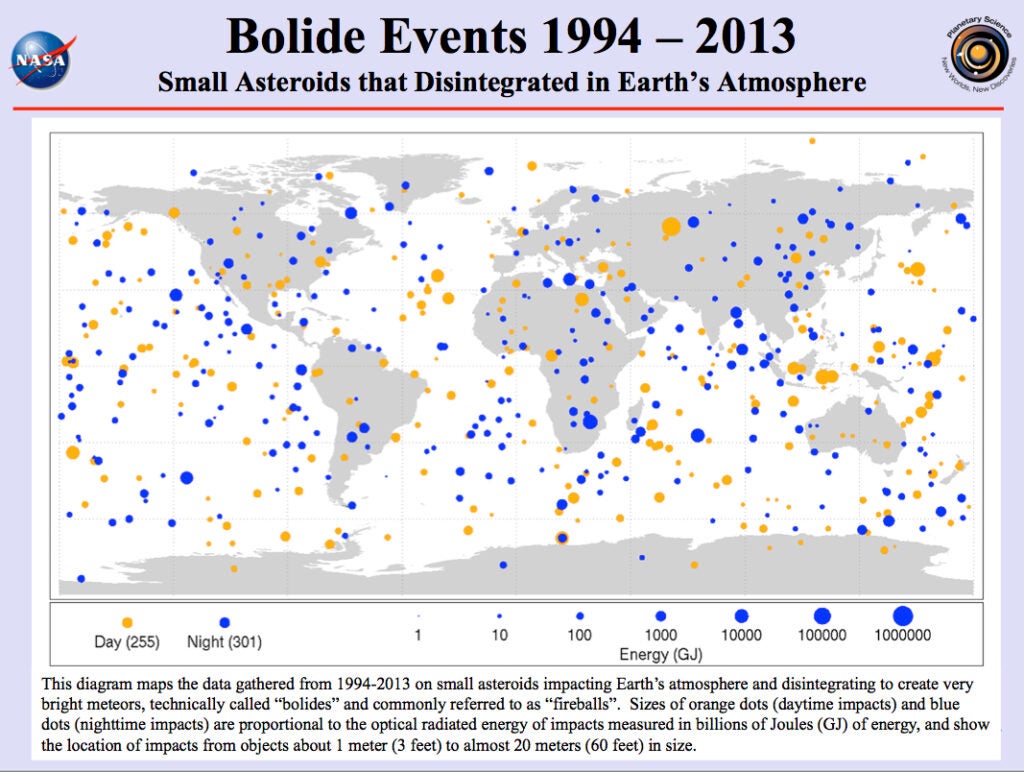 The implications of a truly massive asteroid strike (like the one that killed the dinosaurs) are so serious (extinction, climate change, general disruption of life as we know it), that scientists are keeping an eye on the sky.

Mainzer estimates that the vast majority (over 90 percent) of the truly huge, extinction-causing asteroids currently in space have been found, which is great news. But of the smaller asteroids, ones that are about the same size as the one that created Meteor Crater? Only about one percent of those are known to researchers. Because asteroids are tiny dark rocks set against a dark background they are notoriously difficult to detect…especially the smaller ones. Scientists have an estimate of how many are left to be found based on previous surveys of the sky and computer models that estimate just how many asteroids are up there.

Only knowing about one percent might seem scary, but don’t panic.

“If they [asteroid impacts] were more common, then humans wouldn’t be here.” Mainzer says. She hopes that within the next year NASA will approve a dedicated long-term asteroid detection spacecraft called the Near Earth Object Camera or NEOCam. WISE, though it has done a stellar job, wasn’t intended to be used for asteroid detection (it was originally supposed map the entire sky.) If approved, NEOCam would watch for small asteroids, keeping track of even small, dark asteroids difficult to see with traditional telescopes, and would be able to run for many years instead of the months-long lifetime of WISE, enabling researchers to actually track asteroids over long periods of time.

Then there are missions to the asteroids themselves. NASA’s Dawn mission, currently paying visits to huge protoplanets in the asteroid belt, is gathering information about the composition of asteroids and their environment. (It’s also sending back some great pictures.) By 2025, NASA plans to capture an asteroid and bring it back into earth’s orbit. NASA is identifying candidates that are close enough to the earth that they could send a spacecraft there quickly. So far, they’ve identified four potential asteroids that could be towed from their current location to somewhere near the moon.

This Asteroid Redirect Mission, or ARM, is mostly intended to be a training ground for astronauts, practicing skills that might prove useful if a mission to Mars ever materializes. They would use tools to take rock samples and explore the surface of the asteroid, potentially even bringing samples back to Earth. But there’s another side to the mission as well. If NASA can successfully direct an asteroid into earth’s orbit, than it might be able to usher another one out of earth’s orbit, preventing a future Meteor Crater.

An impact like that happening today would cause different levels of destruction depending on where it hit. If it hit in the ocean, which covers most of the Earth’s surface, it would likely do very little damage. If it hit on land, it would likely cause another huge crater to form, killing whatever happened to be standing or growing in the landing zone, but not really changing life regionally. Now, if the landing zone happened to be a major urban center, that would be a very serious issue. Rebuilding a city center that’s been wiped out by an asteroid strike would be very expensive, but even though human dwellings are sprawling all over the place, the chances of a large asteroid on a collision course with Times Square is very very low.

But that doesn’t stop us from planning for the worst. Along with ARM, there have been plenty of proposed asteroid-deflecting technologies, including nuclear bombs and paint balls. But one of the more feasible ideas is simply doing a better job of mapping them out. The non-profit B612 foundation plans to launch the Sentinel Space Telescope in 2018 with the express goal of identifying and tracking objects that enter the Earth’s personal space.

With programs like NEOCam and Sentinel on their way, future generations that visit Meteor Crater should be able to rest easier, knowing that even if something like the asteroid that created this marvel was headed our way, at least we know about it.