Buried under an ice cap, the water is so deep scientists couldn't probe to the bottom. 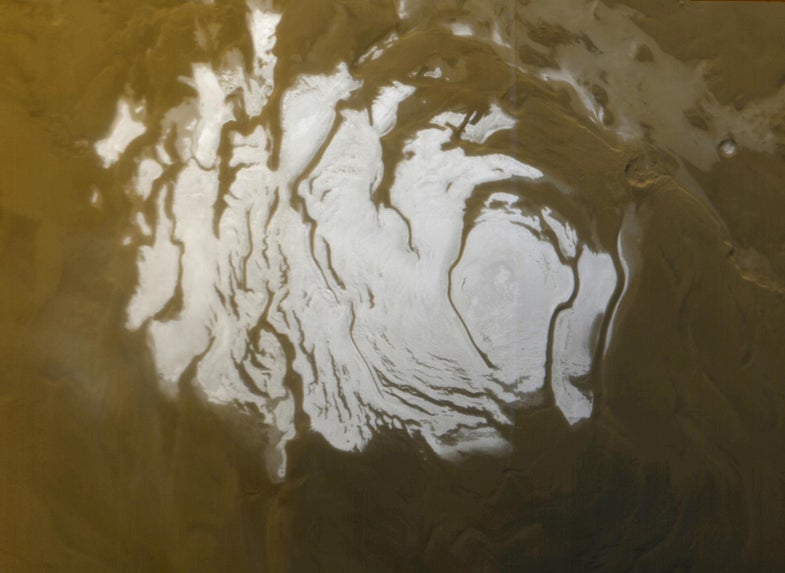 Mars is now a dry and dusty world, but at some point in the past it had water on it and it may still run at times today. For the first time, though, new research suggests the Red Planet might currently possess a large stable body of liquid water, one that stretches roughly a dozen miles across and is buried under nearly a mile of ice.

There is life virtually wherever there is water on Earth. As such, researchers have long hunted for signs of water on Mars to see if the Red Planet might once have been a home to life—and might host it still.

Mars is now too cold and dry for liquid water to last on its surface. However, previous research has unearthed what appear to be ancient seabeds and river valley networks that show Mars was once covered in rivers, streams, ponds, lakes, and perhaps even seas and oceans.

Currently, vast amounts of water ice lie trapped around the Martian poles. Dark, narrow lines seen on Mars also hint that saltwater might run down some of its slopes every spring and summer, boiling away rapidly into the Red Planet’s extraordinarily thin air.

To see if liquid water might hide under the Martian surface, scientists analyzed data collected between May 2012 and December 2015 by the Mars Advanced Radar for Subsurface and Ionosphere Sounding (MARSIS) instrument on the European Space Agency’s Mars Express spacecraft currently orbiting the Red Planet. MARSIS transmits low-frequency radio pulses at the planet’s surface that penetrate the planet’s crust and get reflected back when they encounter changes in density or composition. They published their results today in Science.

Using this technique, the researchers discovered what appears to be a huge underground reservoir of liquid water under the southern polar icecap of Mars. It lies 1.5 kilometers (4,921 feet) below the surface and stretches 20 kilometers (12.4 miles) sideways. “We’ve been searching for bodies of liquid water on Mars for a long time, so this is definitely exciting,” says Geronimo Villanueva, a planetary scientist at NASA Goddard Space Flight Center in Greenbelt, Maryland, who was not a part of this study.

Though they haven’t yet characterized the entire reservoir, it appears to be enormous. “We can’t see the bottom of this body,” says study co-author Elena Pettinelli, a geophysicist at Roma Tre University in Rome. “It’s two or three meters deep at least.”

Bodies of water buried deep under ice exist on Earth, too, and they’re generally home to life. The miles-thick Antarctic ice sheet both protects water from freezing air and imposes enough pressure to lower water’s melting point. “You can find bacteria in what is seen in Antarctica, so there may be a good possibility that what we found on Mars is a good environment for the preservation of microbial life,” Pettinelli says. “Martian life could have survived.”

The temperatures at the base of Mars’ southern polar icecap are expected to reach about negative 90 degrees F (negative 68 degrees C), well below the freezing point of pure water. However, the scientists noted that the magnesium, calcium, and sodium present in Martian rocks could dissolve in water to form a brine. This salty water, together with the pressure of the overlying ice, could allow this body of water to remain liquid, according to the researchers.

It remains uncertain if this newfound body is a lake of water, a pocket of slushy mud, or an aquifer (that is, a body of porous rock holding water). “With the equipment we have, we have no way to say if it is a lake or not a lake,” Pettinelli says.

There may be other, smaller underground bodies of water on Mars. “I don’t see why we would have found the only one,” Pettinelli says. Villanueva noted that future mining of MARSIS data could turn up more watery pockets.

Another ground-penetrating radar system orbiting Mars, known as SHARAD, mounted on NASA’s Mars Reconnaissance Orbiter did not detect this reservoir. However, “SHARAD uses higher-frequency radio waves that cannot penetrate as deep as MARSIS can,” Pettinelli says.

Ali Bramson, a planetary scientist at the University of Arizona in Tucson who did not take part in this work, says this reservoir does lie on the limits of what SHARAD can detect. “I think the case for liquid would be stronger if both radars had detected a similar signal,” Bramson says. “Additional studies of radar properties of Martian materials will be needed to confirm the interpretation of the detection.”

Assuming that this reservoir exists (scientists think it does, but we need more testing to be confident), it may be a long time before scientists can examine samples from this water. “The extremely cold temperatures at Mars’ poles and lack of sunlight for months at a time in the winter make it very difficult to keep a spacecraft operational at the poles,” Bramson says. “Additionally, landing on the south pole of Mars would be extremely challenging given the high elevation there, which means there isn’t a sufficient amount of atmosphere to help slow down a lander upon entry, descent and landing.”

Even if we did have a spacecraft that could survive at the Martian poles, we don’t yet have the ability to get to the water. “Drilling down kilometers to get to the base of the ice, where this putative subglacial liquid water detection was made, would require a large investment into expanding the engineering capabilities that we have today in order to accomplish deep coring remotely on another planet,” Bramson says. “But, if accomplished, it would be very exciting scientifically, and also very helpful for the utilization of resources available on other planets, which would aid any future human exploration to Mars and beyond.”