Inside The Tesla Factory 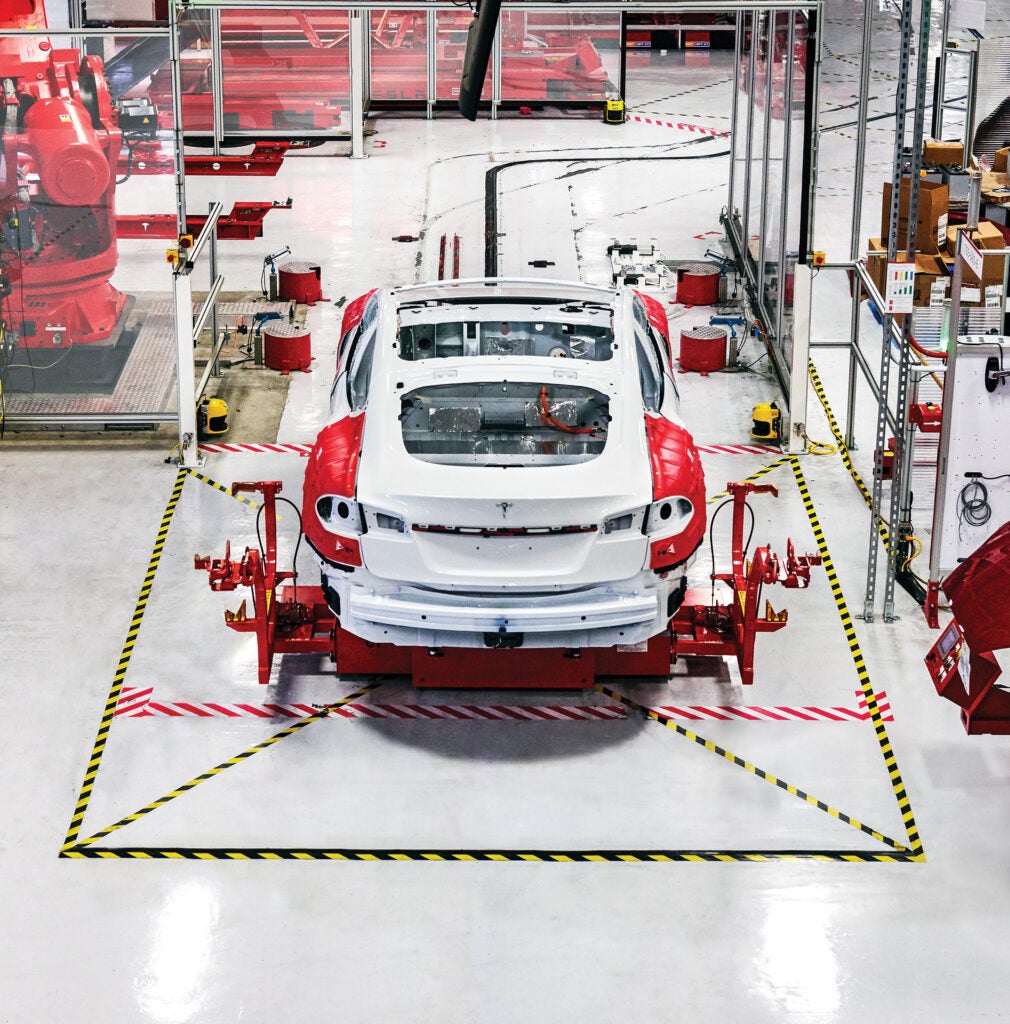 A robot cart follows magnetic strips on the floor to move this Model S down the production line. Such electric, self-charging robots load and unload cars at each stop, making them key to the factory’s efficiency. Here, the Model S—with its body panels attached to an aluminum-­and-steel skeleton—nears the end of its general assembly.

What will Elon Musk announce at his secretive Tesla “product unveiling” on October 17th? An electric motorcycle? Lidar and HD maps in his self-driving cars? A flux capacitor? Or our personal favorite: an actual Iron Man flying suit?

We hope it’s all of the above.

We do know this much because we recently put a photographer on his factory floor in Fremont, California: He’s going to be cranking up the output to an unprecedented level, using a series of high-tech robots, lasers and other cool stuff you’ll see below. Tesla recently asked Fremont’s planning commission to let it nearly double the size of the 5.3 million-square-foot facility. That’s so Musk can churn out 1 million cars a year by the end of 2020, a Tony Stark-size promise and a grand leap from the 50,580 he rolled out last year.

Whatever Musk is up to, he does not shy away from grand statements. His Master Plan, Part Deux for Tesla’s future, which he posted online in July, ten years after his first master plan, calls for cars with solar roofs and even the ability to make money for their owners when they’d otherwise be garaged. (Yeah, he’s talking to you Uber). Musk’s high-minded vision is already a high-tech reality in Fremont, where PopSci trained its lenses this year. 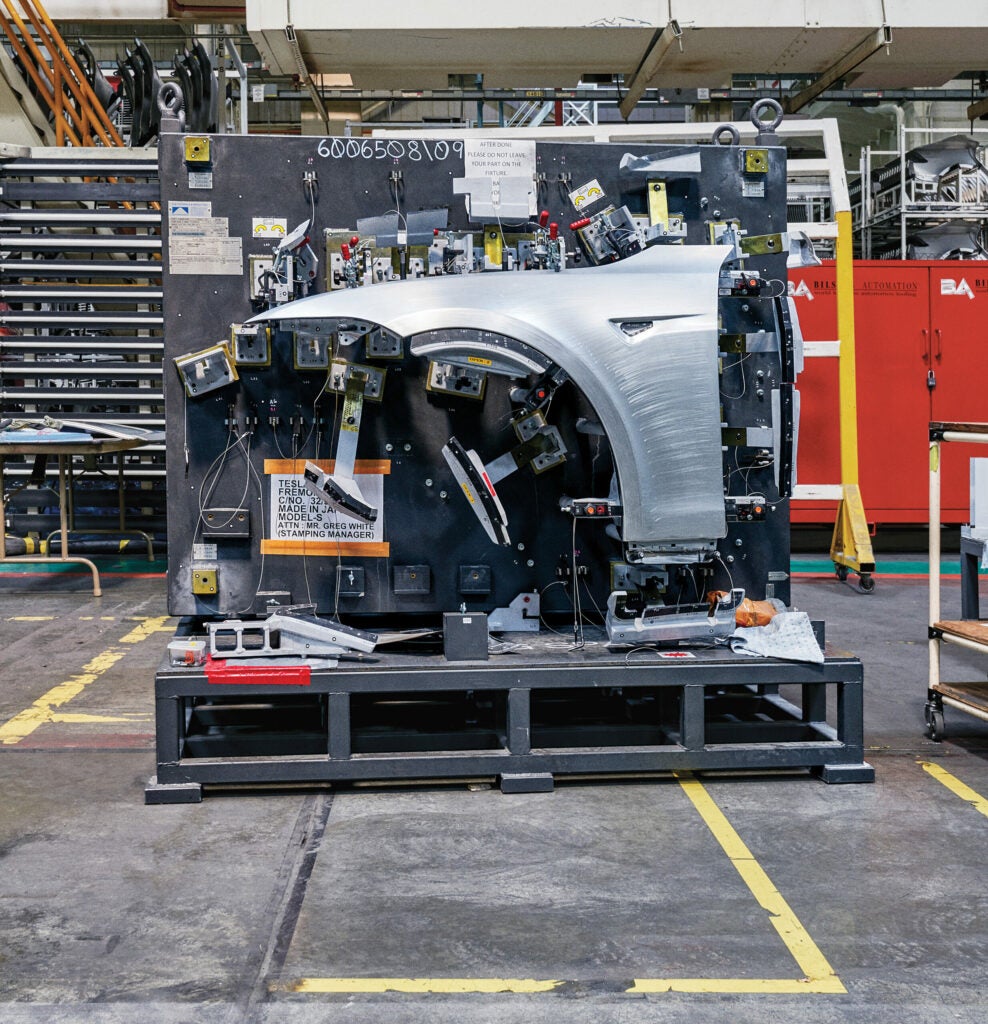 A Model S fender begins its life as an aluminum sheet snipped from a 20,000-pound coil. A laser-cutting robot then slices it into the desired shape before a press—with 1,000 tons of force—stamps it into a three-dimensional fender. It’s then mounted to a measuring board where engineers examine it for flaws. 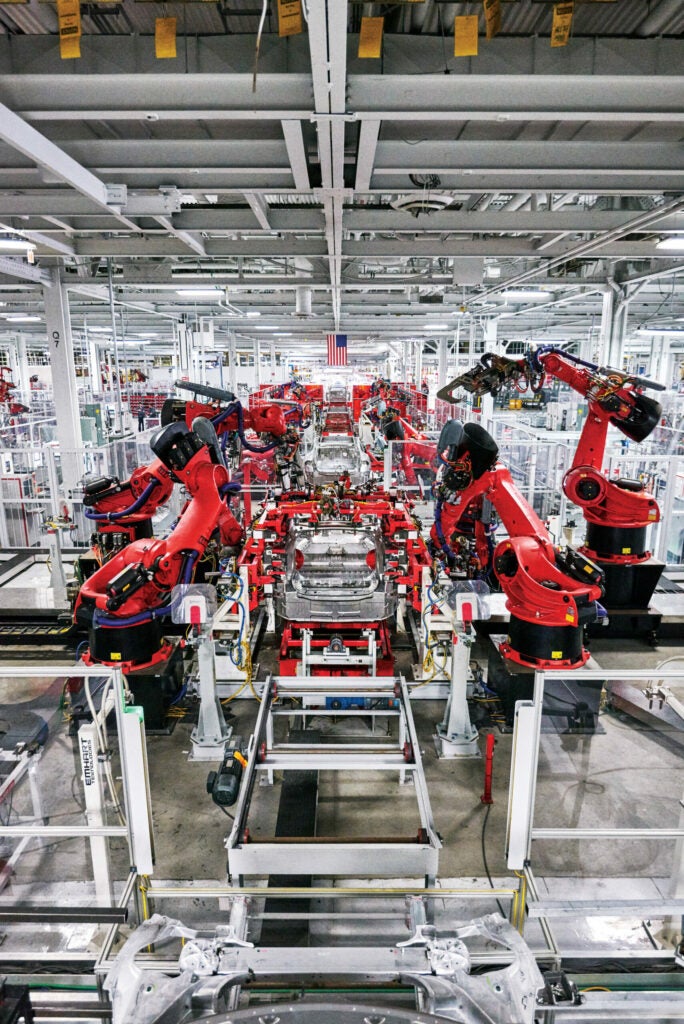 German-made Kuka assembly robots piece together the aluminum-­and-steel bones of the Model S into skeletons, or what Tesla calls “uni-bodies.” Powerful and precise, the robots use high-definition 3D cameras to see as they drill, weld, and rivet together the body. All told, the factory is “staffed” by some 200 robots, many named for X-Men characters such as Wolverine, Xavier, and Storm. 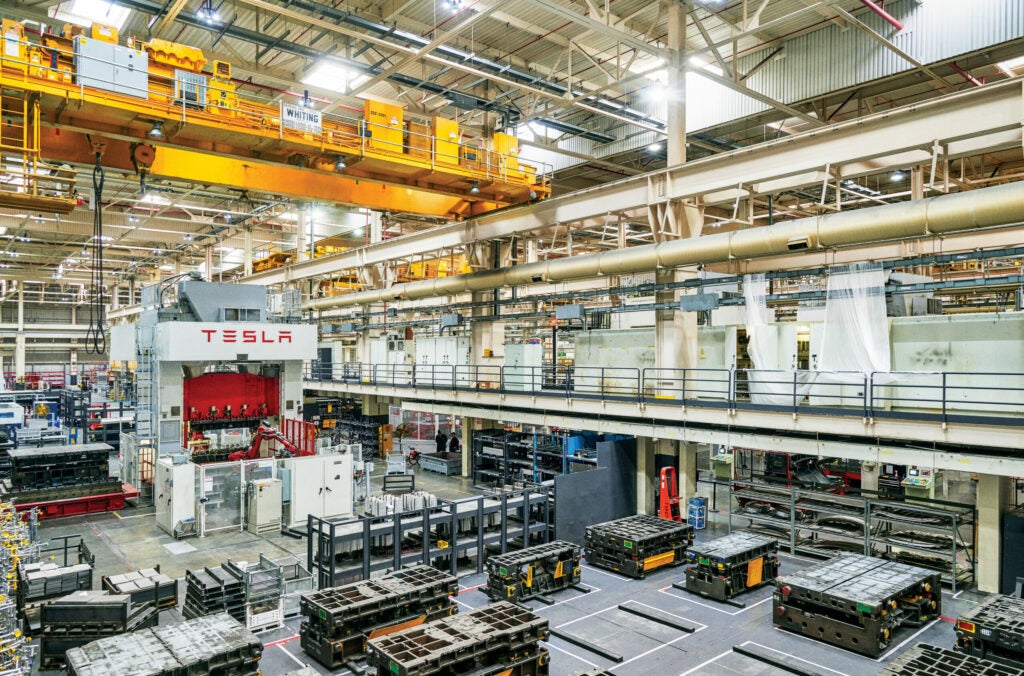 In the stamping center, raw aluminum becomes hoods, bumpers, fenders, and panels. (Lightweight parts are key to the Model S 90D’s industry-leading 294-mile range.) This past year, Tesla spent a reported $1.6 billion on factory expansion to prepare for production of the Model 3, a mass-market sedan with an estimated baseline price of $35,000. Tesla has already received nearly 400,000 preorders. 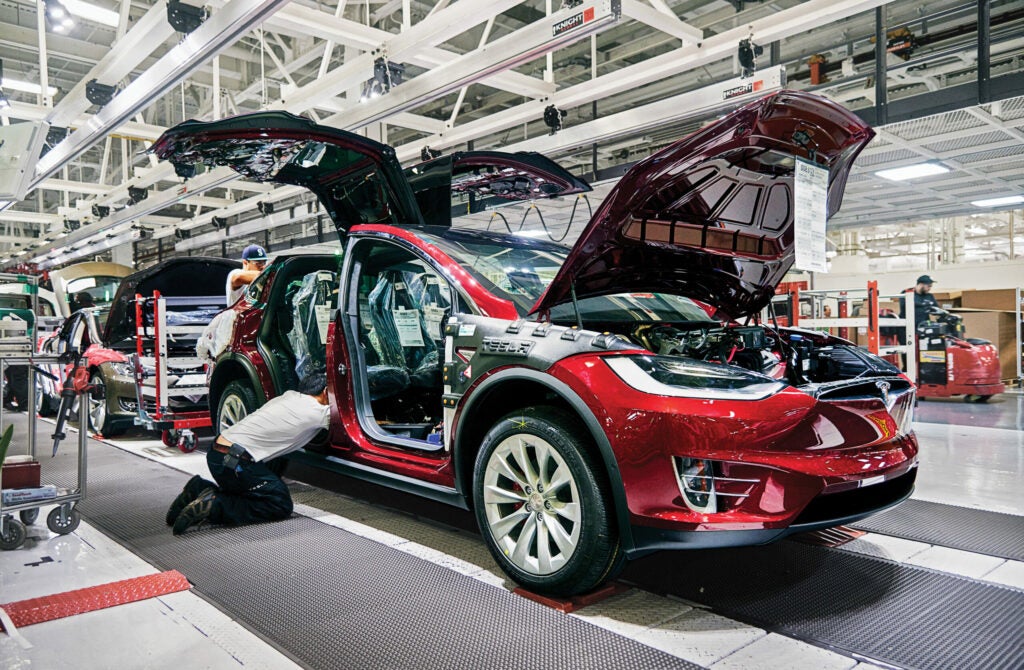 Humans—not robots—put the finishing touches on this Model X by attaching seats, door handles, and instrument panels. Tesla aims to deliver 60 to 80 percent more cars this year than last, Musk says. If the company meets its production goals, Tesla will roll out its 190,000th vehicle by the end of the year. For 2018, Musk pegs the output target at a half-million, and expects to double that by the end of 2020.

This article was originally published in the September/October 2016 issue of Popular Science, under the title “Inside The Tesla Factory”