I had to flee from a sagebrush fire

When lightning struck (literally), this wildfire researcher got a little too close to her work. 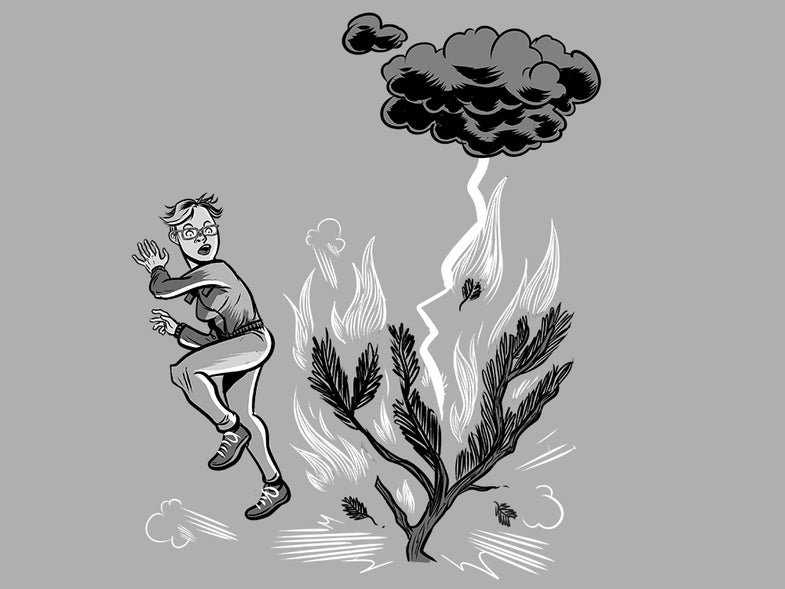 ↑ Crystal Kolden, Associate Professor at the College of Natural Resources at the University of Idaho

I used to fight wildfires with the Forest Service in California, but now I study them. Often, ignition is straightforward: Humans set fires while doing something not so smart. But some infernos have other causes.

While I was in grad school in Nevada, I was puzzling over how flames start in sagebrush, a plant much smaller and less dense than a tree. Scientists know lightning is the culprit, but the exact mechanism is a matter of debate.

One clear day in 2005, I was out hiking in the Santa Rosa Range. I noticed a giant dark cloud moving in, and I hightailed it out of there; you don’t want to be the tallest thing on a mountain in a lightning storm. Just as I got back to the car, the wind hit. I started driving out to the highway, and all of a sudden, a mile ahead of me, this bolt of lightning reached down and exploded a sagebrush. At first, I was terrified, but my second thought was, Oh my gosh, that’s how a sagebrush fire starts!

That feeling quickly turned back into terror—the winds were now blowing the flames into a blaze that threatened to cut off the road to the highway. My heart was pounding as I hit the gas and got out of there, the ­inferno growing in my rearview mirror.

This experience is one of the reasons I love what I do. Unlike scientists who stick to laboratory or theoretical work, I get to see how things like this operate in the real world.

As told to Mary Beth Griggs and Rachel Nuwer