Peter Jackson made Hobbits look so tiny with this mind trick 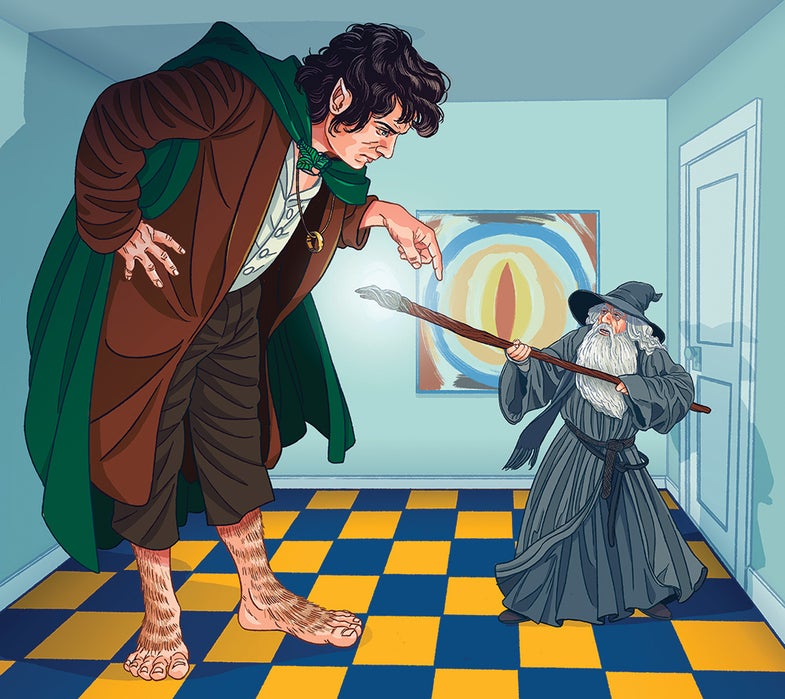 In The Lord of the Rings trilogy, Frodo the hobbit appears minuscule beside the absurdly tall wizard, Gandalf. But in reality, the pair of actors have a mere 5-inch height difference. How did director Peter Jackson ­exe­cute such a sizable deceit?

Hobbits appearing doll size, tourists pinching a grain-of-salt-size Eiffel Tower for Instagram, and beachgoers standing atop a body of water are all made possible by something called forced perspective, a technique that uses changes in distance and vantage point to hijack the way our minds perceive size.

Take the Ames room, as depicted above. This seemingly normal space allows anyone to dramatically increase in size when they walk from one end of the expanse to another.

The key is the room’s shape. Instead of a perfect rectangle with 90-degree angles and flat floors, an Ames room is a sloped trapezoid. As someone steps backward and downslope along the far wall, they appear to shrink—at least if you’re watching from a peephole placed in the right spot. Designers make sure the light hits your eye at the same angles it would in a regular old rectangular room, says Andrew Glennerster, a visual neuroscientist at the University of Reading in England.

When you watch someone walk across, you’re stuck with two contradictory standards, Glennerster says. Rooms have 90-degree corners, and people don’t change size when they move across them. What’s most peculiar is that for some reason, our brains choose to throw out the human-size-constancy standard over the right-angled-rooms one. This makes mind tricks like these far more powerful than anything done via digital wizardry.