A trip to Patagonia could cost thousands, but there are ways to make it more affordable. 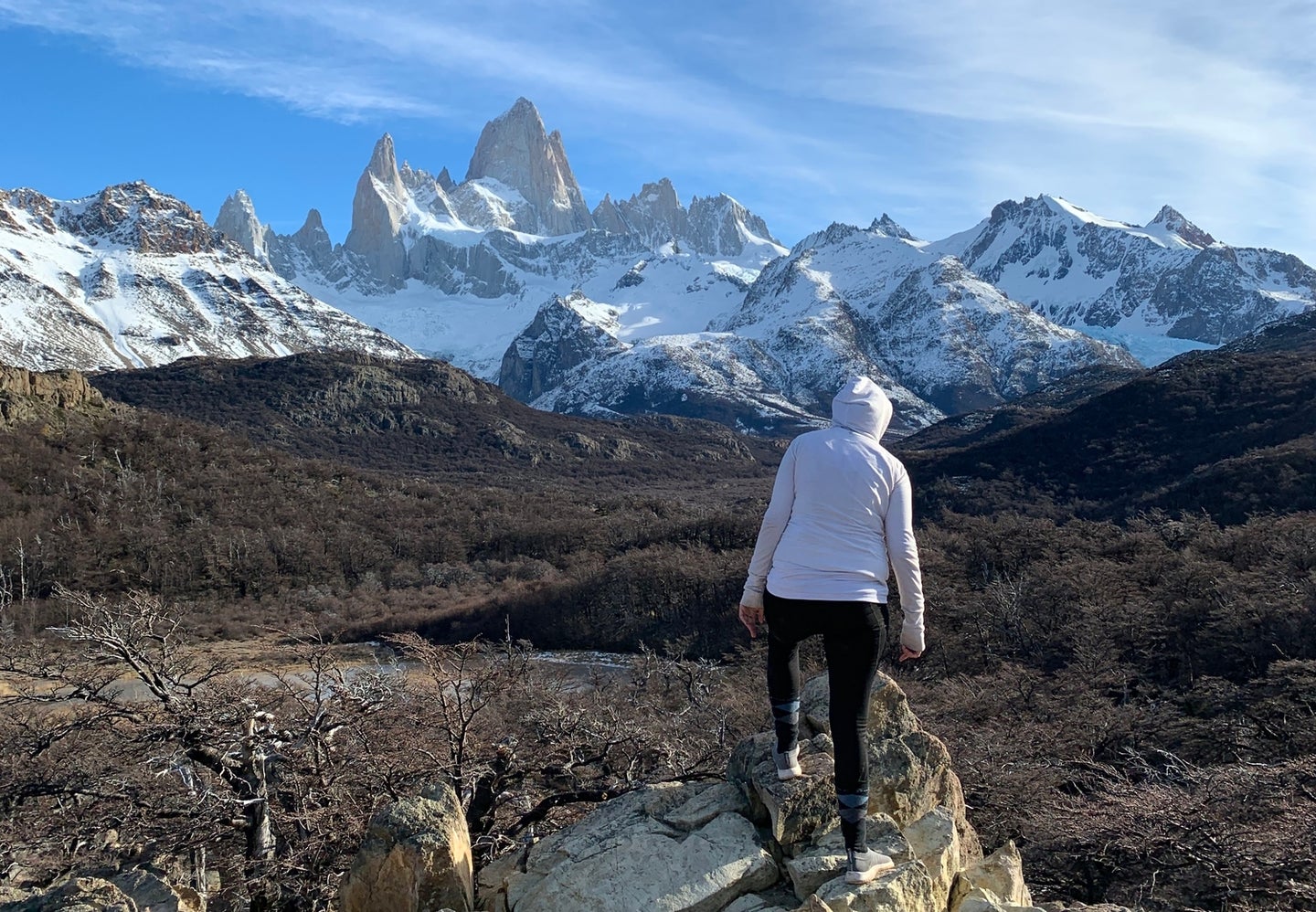 When I began planning a trip to the hiker’s paradise that is Patagonia, my dream itinerary could have easily cost $4,500. But as the reality of walking away from two full-time jobs—and those lovely steady paychecks—set in, my husband and I came up with creative ways to cut almost $2,500 in expenses.

This 15-day excursion—one of the final legs of a six-month journey through South America with our one-year old, included visiting the Argentinian and Chilean sides of the glaciers and the far end of the world in Ushuaia: Tierra del Fuego. In all, we spent $1,537.80 on the three of us.

Create a budget—and stick to it as best you can

Based on estimates provided by individual traveler blogs and the Budget Your Trip website (which lists the average daily per-person cost by country and budget type), I allocated $100 per day for our time in Patagonia. Having a set amount helped keep us accountable and see where splurges—like eating out—added up. In the end, we spent $102.52 per day, which was a little over our goal.

Considering the daily mid-range budget is between $60 and $200 per person in Argentina, and the average traveler spends $73 in Torres del Paine, in Chile (estimates from Lonely Planet and Budget Your Trip, respectively), I think we did an impressive job.

By traveling during Patagonia’s low season (roughly June to August), we saved money by staying in hotels and Airbnbs that were desperate for customers, but also found attractions had free or lower-cost entry fees during the off-season. For example:

I’ll be the first to admit it was intimidating to figure out the logistics of navigating among Patagonia’s top attractions on a $100-a-day budget. With a child. In the middle of the winter.

From our research, we learned the least expensive way to travel between our destinations would be by bus, but the service wasn’t available every day during low season. Once, we had to join a private tour because there were no other travel options. Other possibilities, such as renting our own car or hiring a private taxi company, would have cost even more.

But of course, there were times in which we were overwhelmed by logistics fatigue. In those moments, I’d wonder if there was a private tour that could take on all the planning for us. And there were many, such as the one I found on the tour booking site Viator, which hit essentially the same highlights we wanted to see.

Booking a tour is easier, albeit more expensive. If you do end up opting for one, it can help to price shop and, if possible, ask around at tour agencies in person. For example, while traveling in Brazil, we chose to go on an organized tour of the Amazon rainforest. Online, I found prices as high as $1,020—a lot more than the $302 we ended paying for a three-day, two-night experience for our family after asking various tour agencies face-to-face until we found the best price.

Opt for low-tech, no-frills gear—we spent less than $35 on ours

As part of our full South American journey, we traveled from the humidity and high temperatures of Brazil (between 80 and 90 degrees Fahrenheit), to the fall weather of Buenos Aires, Argentina (around 60 degrees). That’s where we picked up warmer, hiking-appropriate clothing for the colder weather of the glaciers of Patagonia—where it would be up to 40 degrees during the day as low as 20 degrees come nighttime.

We shopped around at malls and walked miles of storefronts in Buenos Aires and Montevideo, Uruguay, scouring for the best deals that wouldn’t break our budget. In the end, we saved by picking up coats—our biggest-ticket items—second-hand at a flea market, not buying hiking boots (more on that later) and price-shopping until we found the least expensive accessories.

In all, we spent $34.49 on gear for two adults, including two used coats and a hat from a flea market, plus brand new gloves, a hat, two winter ski masks, and three pairs of thick, knee-high winter socks through Patagonia’s winter weather, which we knew would include snow, rain, and ice. As for our baby, we found the coat and boots pictured here and a pair of sweatpants (not pictured) all for about $45.

Now, the boots. The inexpensive, but practical, options we came across were between $50 and $100 per pair, which could have meant an additional $200 tacked onto our budget for the two adults. I wasn’t looking forward to spending that much on shoes that I might never wear again, especially since I had winter shoes back home. Plus, traveling light didn’t leave much room to carry them around with us.

My husband suggested a trick he’d used back when he visited New York City in the winter and didn’t have any boots. We put on one pair of long socks, then slipped each foot into a plastic bag (in a pinch, I used the plastic packing my baby’s diapers came in), topped that layer off with another long sock on each foot, and, finally, put on our regular, non-waterproof walking shoes.

We tried them, and they worked. On our longest day, we hiked 10.1 miles (nearly 25,000 steps) without falling or getting wet, or even that cold, for that matter. Pro tip: Due to wear and tear, you will most likely need to change your plastic layer every few days. Also, be sure to warm up your socks against a heater between trips outside, as they’re likely to feel pretty cold after a long walk or hike.

Cutting costs while on your journey

During our five days and nights in Ushuaia, Argentina, we only ate out for one meal of salad, pizza, and a shared beer and dessert. That added up to $27.

Because our food costs for those days totaled $102 for our family of three, that one splurge amounted to more than 26% of our meal expenses. When we shopped for meals we made at home, we spent a little more on items like whole milk for our baby, and nuts, chocolate, and cheese for us adults. We could have stretched our money further, but these foods made for more filling and delicious meals, allowing us to eat well and save more in the long run.

In the end, we only ate out twice during our 15 days in Patagonia. If we’d eaten in the same kind of restaurants but for every single meal, our food costs could have easily added up to $1,186.

Ahead of our travels, we consulted resources like Lonely Planet to learn about the safety of the drinking water wherever we’d be. While travelers to other destinations on the continent are often advised to filter water or buy it bottled, tap water in Chile and Argentina is considered safe. We drank the water in both countries without any problems, which probably saved us almost $50 (based on what we spent in Bolivia, where water is not considered safe to drink).

For other countries, I invested in a SteriPEN so we could filter our water and used our 3-liter CamelBak for long walks.

You’ll usually find the best-priced souvenirs where there’s a concentration of stores. There, you can compare prices, bargain, and even purchase items directly from the artisans who made them.

When visiting Uruguay, we ran out of time (and local cash) to buy a souvenir magnet, which we’re collecting for our baby. We’d seen the price as low as 40 Uruguayan pesos (around $1) in local stores, but we ended up forking over $6 at the airport.

Hiking is a great travel pass-time because unlike many other high-adrenaline, high-reward adventures, the activity itself can be free or low-cost, and most of the associated costs—including accommodations, food, gear, and souvenirs—can be cut back in creative ways.