The next novel you read may be in Facebook Messenger

Facebook, Hooked, and other platforms are changing the way we read. 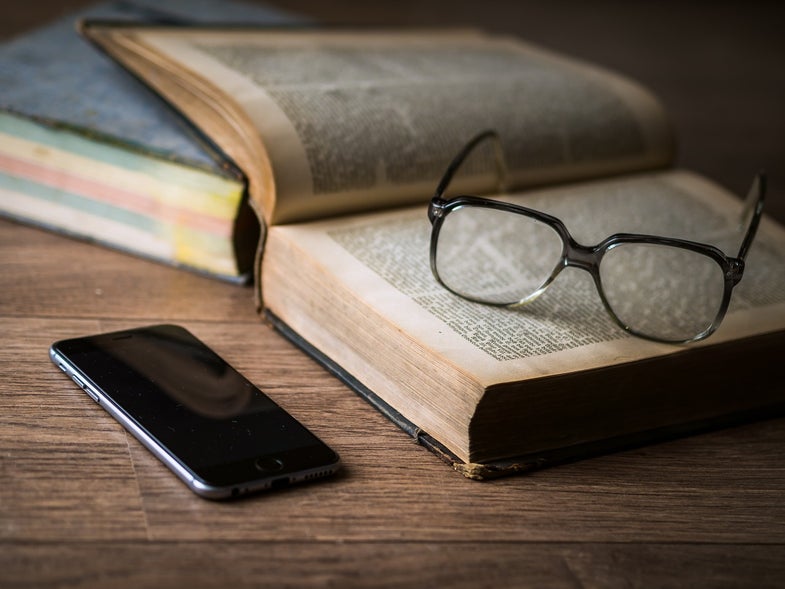 Smartphone fiction is here. Will it last?. Deposit Photos
SHARE

We aren’t exactly a nation of readers. On a typical day, just 15 percent of men and 22 percent of women read for pleasure. In the last year, one in four Americans haven’t read a single book in any format—paperback, audiobook, or otherwise.

But social media and smartphone app companies think they may have the solution to our reading aversion. From Silicon Valley heavyweights to bookworm-run startups, efforts to bring fiction to our smartphones are proliferating. While reading a book in Facebook Messenger or “chat fiction” on Snapchat might seem strange, silly, or tedious, each new initiative is pushing up against the boundaries of the book cover.

Last year, James Patterson, one of the most commercially-successful authors of all time (Forbes pegged his 2016 income at $95 million), and his team approached Facebook about adapting one of his forthcoming novel to its messaging app. So the author, who believes Americans need “a shared literature,” offered Messenger its choice of two soon-to-debut books. The company selected a narrative about a New Orleans-based detective, who runs a well-known food truck with his ex-wife. After a few months of harried development, The Chef rolled out Tuesday morning on Messenger. You can find it now by searching “The Chef by James Patterson” in the app.

Without a standalone book portal in the Messenger app (a designer says they’re working on that now), every piece of the Patterson novel had to be created within the app’s pre-existing design parameters. Books usually require page-turning, but the Messenger novel unfurls itself to readers each time they press a knife emoji. The text comes through in a typical message bubble, or several at once. Each passage fills a single page on your smartphone—and not a centimeter more—so you don’t have to scroll.

The mobile text of The Chef is the same as in the print edition, which will debut in February 2019, but the physical copy is wordier. Only the most active and important passages were included in Messenger, the better to keep readers cruising. The bound copy takes about 6 hours to read, while the chatbot runs just 3 hours. But the app-based experience has plenty of multimedia features to compensate. The template for ads has been repurposed for digital “Easter eggs,” like photos imported from an Creative Lab-made Instagram account for the fictional food truck in the book. Maps of New Orleans, a tutorial on local cooking, and even video surveillance footage (which required a script, actors, and producers) of fictional crimes are also embedded.

The project marks the social platform’s first foray into fiction, but it’s more experiment than business model. The story doesn’t contain any ads or promotional deals. In fact, it doesn’t generate any real revenue at all. It’s the first word on an otherwise empty page. As such, Messenger and Facebook’s in-house Creative Lab don’t really know what to expect. At a press event on Monday, the design team was already talking about the improvements they hoped to make to the next book—before the first one even launched. But the room was buzzing with possibility.

A more established reading app might offer some insight into what’s to come for Facebook. Launched in 2015, Hooked forgoes adaptation in favor of commissioning its own made-for-social stories. These original works are part of a digital genre the company calls “chat fiction”—stories written in the form of text messages, which appear sequentially on-screen.

Husband-and-wife startup duo Parag Chordia and Prerna Gupta went through all kinds of iterations before the launch. The couple originally had high hopes for image-driven media, inspired by comic books, and excerpts of bestselling novels. But completion rates among their target audience of 13- to 24-year-olds was low: Gupta says just 35 percent of readers finished the excerpts. Chat fiction, however, thrived. The 1,000-word story arcs, which involve two or more characters updating each other on plot development in text messages, boasted completion rates in the 80th and 90th percentile.

This week, Hooked released its longest piece of chat fiction yet, on a dedicated Snapchat channel. The 30,000-word-long story, Dark Matter, appeared in “episodes” (more conventionally known as “chapters”) of 5,000 to 8,000 words. Like all Hooked stories, the tale leans heavily on cliffhangers to keep readers “hooked” from message to message. There’s a liberal use of ellipses, and a tension-building mystery. “When you’re on mobile, you are in a constant battle for attention,” Gupta says. “Users need to feel that there’s some payoff in one episode,” or they won’t come back for more.

A “Snapchat-based book” sounds like a postmodern word salad, but Hooked’s serialization strategy has actually worked for centuries. In the Victorian era, most authors published their stories in bits and pieces in newspapers, with one novella doled out over weeks or months. The Pickwick Papers by Charles Dickens, * The Count of Monte Cristo* by Alexandre Dumas, and the character Sherlock Holmes all first appeared in periodical form.

Maybe that’s why the literary old guard has dabbled in this social fiction space, too. In 2012, for example, the New Yorker magazine published Jennifer Egan’s original story over Twitter. The story, “Black Box,” also appeared online and in the magazine, but it appeared to be written to the parameters of the social platform, as it’s comprised of hundreds of lines roughly 140 characters in length, instead of typical paragraphs. More recently, the New York Public Library has started turning public domain books into (very long) Instagram stories. Animated, click-through copies of The Yellow Wallpaper, Alice in Wonderland (in two parts), and, as of this morning, The Raven are available in the @NYPL account’s saved stories.

But something else is at work, too. Publishing has never not been in a state of disruption. From monks in scriptoria painting words into books no one could read to the dawn of the printing press to the era of ebooks, how we read is always changing. The only thing that’s remained consistent is that the words themselves matter most.

Selling someone who loves the crack of a fresh hardcover spine, on a Facebook Messenger-based novel is a challenge. So is convincing a Snapchat-loving teenager to read a musty library book. But goading someone who loves literary fiction into reading a James Patterson novel—whether it’s a paperback, ebook, or Messenger bubble—is even harder. The medium and the message feel increasingly indistinguishable, but the message still matters more.

Ultimately, Messenger’s The Chef and Hooked’s Dark Matter aren’t for everyone, and they don’t claim to be. From Patterson to Gupta, the stated goal has always been to get more Americans reading in whatever form they prefer. It’s OK to support a proliferation of reading platforms, and still stick to your paperbacks.