Till mid-February, early risers will see the first five-planet alignment in a decade 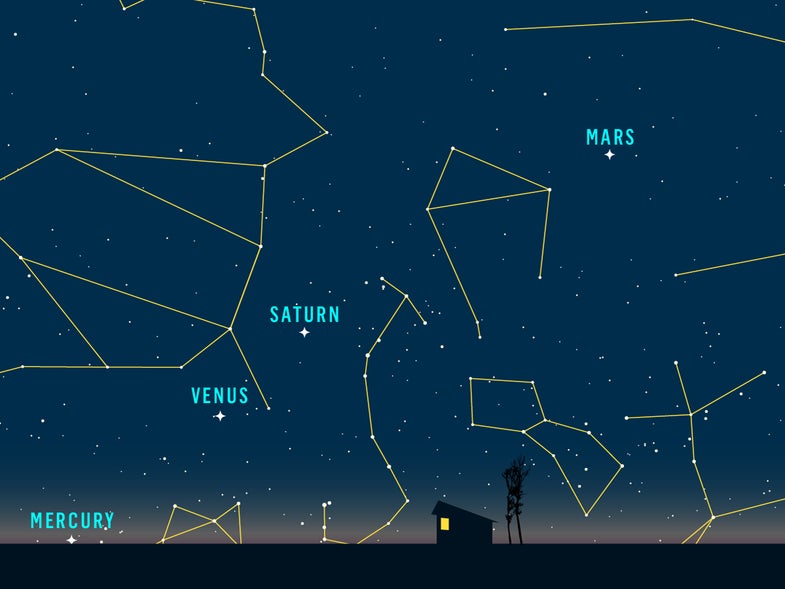 Positions Of The Planets Before Sunrise

Early-morning stargazers will catch sight of the five naked-eye planets strung in a line across the heavens. This view shows the sky at 6:45 a.m. from Atlanta on January 20, but the planets will be visible from just about anywhere, and will grace the morning sky for a month.

Starting tomorrow morning, all five* visible planets will shine down from the sky in the morning twilight. Head out about an hour before sunrise, and look toward the southeast.

The four bright ones—Saturn, Jupiter, Mars, and Venus—are pretty easy to spot, if you’ve got a star chart in hand. Venus, for example, will be the brightest thing up there (apart from the moon). Mercury is a little trickier, because it’s easily lost in the light of the soon-to-rise sun.

The planets should be visible from just about anywhere on the globe (though not from the North Pole), and the view will last until mid-February, if tomorrow’s too cold for you. And if you’re a night owl rather than an early bird, you’re in luck: The five planets will all be aligned in the evening sky come August 2016.

What makes all five visible at once? It happens because of the planets’ positions along their orbits. At the moment, these five all happen to lie to the right of the sun, when viewed from above the solar system. That means, as the earth spins, they’re all visible in the sky just before sunrise. You can think if it as a line of six, with Jupiter the first to rise and the sun rising last—and marking the end of the morning stargazing session.

The five planets are visible all at the same time because from the Earth’s perspective they all lie to the right of the sun. So they rise one after another—Jupiter, then Mars, then Saturn, then Venus, and finally Mercury. Last, the sun rises and makes all five disappear with its morning rays.

*Yes, in total there are eight planets, but Uranus and Neptune are too dim to see without a telescope and Earth is the one just there at your feet. So we’re just talking about the big five of stargazing: Mercury, Venus, Mars, Jupiter, and Saturn.