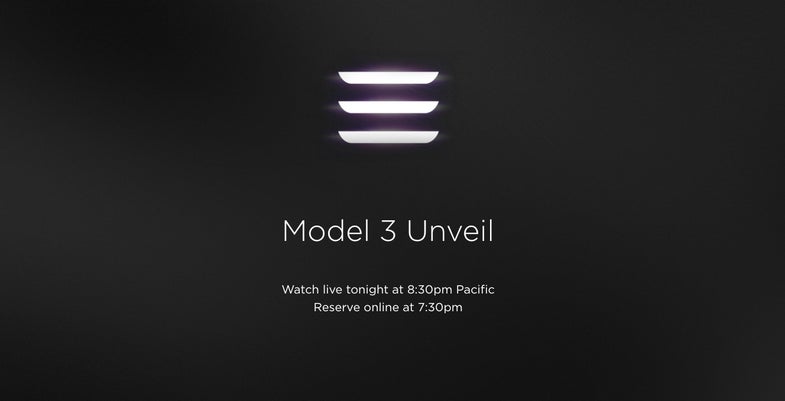 Unless you’re a close follower of auto or tech news, you could be forgiven for not knowing that Tesla Motors is set to unveil a new, more relatively affordable electric car later tonight, the Model 3 (the event kicks-off around 8:30 p.m. Pacific/11:30 p.m. Eastern and you can livestream it on Tesla’s website here). The Elon Musk-founded company’s previous offerings — the Tesla Roadster, the Model S and its variants, the Model X crossover-style electric SUV — have all started just out of reach of the mass market (the Model S around $70,000, these days).

But the Model 3 is expected to change all that, coming in at a more affordable sticker price, and even though no key details or final cost have been confirmed yet, people around the globe are lining up at Tesla showrooms and retail locations to pre-order the new car in person, which requires a $1,000-refundable cash deposit just to reserve a spot. Pre-orders will also begin online on Tesla’s website at 7:30 p.m. Pacific/10:30 p.m. Eastern, and are limited to two per person, according to Elon Musk himself on Twitter.

The fact that Musk thinks there will be buyers trying to buy more than one Model 3 at a time doesn’t exactly help counter the narrative that Tesla is still mostly an elitist luxury company, despite its world-changing ambitions, but hey— we appreciate the heads-up. We’ll have more coverage after the announcement event concludes over on our Speed Lab blog.