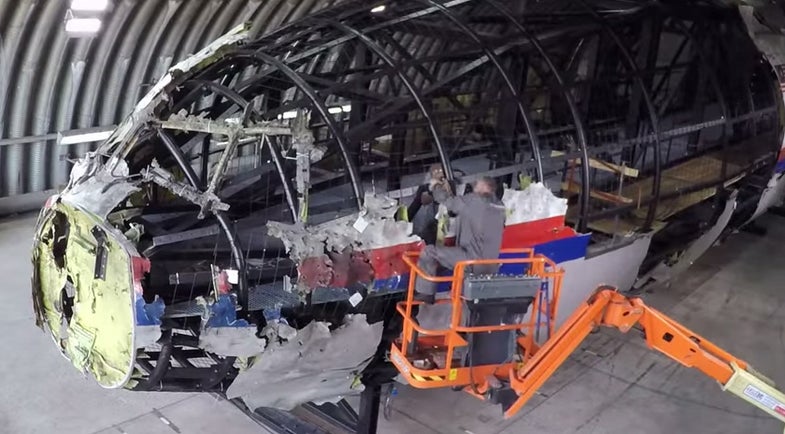 In July 2014, Malaysian Airlines flight MH17 disappeared over Eastern Ukraine midway through its planned route from Amsterdam to Kuala Limpur. Below waged a secessionist war, as Russian-backed separatists attempted to wrest free a chunk of Ukraine. The flight, at 30,000 feet, should have been clear of the conflict. Instead, an investigation by the Dutch Safety Board, published today, confirms what many had suspected since the crash: a Russian Buk anti-air missile shot the plane down.

Work done by open source investigators Bellingcat pointed to a Buk missile launch system, and even retraced the missile platforms’ movements through eastern Ukraine, before it fired its deadly payload. The Dutch Safety Board spearheaded its own comprehensive investigation in part because of the large number of Dutch nationals who were passengers aboard the flight, and because Ukraine requested the Board’s involvement.

Despite Russian theories regarding Ukrainian fighter jets, the investigation has always pointed towards an attack from a ground missile, though it did also rule out meteor impact and internal explosions as causes for the crash. The missile that the Buk launcher fires can reach altitudes of up to 80,000 feet, putting the airliner well within its range. Also telling, the missiles fired by Buk launchers leave distinctive bow-tie shaped fragments, which were found throughout the crash site

The Dutch Safety Board report does not go as far as to identify who fired the missile, instead noting the make and model of the weapon and the area from which it was fired, which was reportedly held by Russian-backed separatist Ukrainian rebels at the time.

Watch a full, 20 minute video of the event as reconstructed from the investigation, below: